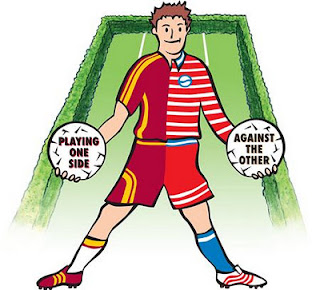 By James M. Dorsey
Dubai’s United Investment Bank has launched the region’s first alternative investment soccer fund modelled on similar controversial European funds amid rising fan opposition in Turkey, Spain and Portugal to hedge funds making bets in football player markets.
The Royal Football Fund, which is hoping to raise $200 million from investors, will focus on acquiring the economic rights of young players in Latin American, African and European countries with a track record in developing talent in a bid to offer investors an alternative investment strategy in soccer.
An estimated 20 per cent of the fund will be invested in listed soccer clubs and television rights for friendly games and tournaments.
The fund hopes to break with the poor performance of past soccer-focussed investment vehicles in the region by following the example of European soccer hedge funds of co-investing with agents and clubs that have needed expertise.
Gulf royals and wealthy businessmen have in recent years bought a number of clubs in Europe, including Manchester City, Paris St. Germain, Muenchen 1860 and FC Malaga. Manchester United is believed to still be in intermittent talks over a sale to Qatar’s sovereign fund, the Qatar Investment Authority.
Gulf states, including Qatar, Bahrain and the UAE, see investment in soccer as a way to project themselves on the international stage; increase their political, economic and commercial leverage; create business opportunities and establish themselves as sport hubs. Qatar, in the most dramatic and controversial move, last December won the right to host the 2022 World Cup.
Qatar’s Al Jazeera has led in securing broadcast rights with the acquisition of the rights for 23 countries of the 2014 and 2022 World Cups as well as French premier league rights and reports that it may bid for the English Premier League. Al-Jazeera is launching this week a dedicated sports channel across the Middle East and North Africa that will broadcast hourly news bulletins and 20 sports news programs.
By contrast with Gulf funds, European hedge funds have been achieving yields of 60 per cent and more per player. Jersey-based Quality Sports Investments Ltd. -- a joint venture between the Los Angeles-based talent agency CAA and Gestifute SA, which represents among others Cristiano Ronaldo, the world’s most expensive player -- and London’s Doyen Capital Partners LLP work with Turkey’s Besiktas, Atletico Madrid and Sporting Lisbon to bankroll signings in return for a share of the profit when the players are traded to another club and buy stakes in under-contract squad members.
The English Premier League banned third-party ownership of players after it complicated in 2008 striker Carlos Tevez’s move to Manchester United. The practice is however allowed under the rules of world soccer body FIFA as long as investors don’t interfere in player trades.
Hedge funds have become attractive as banks increasingly refuse to extend credit to clubs for the acquisition of players. “For many clubs it’s the only way to get access to credit,” said former Spanish league vice president Javier Tebas.
Fans fear that the association with investment funds undermines a club’s ability to generate funds of its own. “It’s still very important for fans: the notion that players belong to the team and not to a hedge fund. It’s not wanted and not welcome,” said Liverpool University soccer finance expert.
Besiktas fan opposition to third party acquisition of some of their team’s players is fuelled by unsubstantiated suspicions that the investment fund is a front for club president Yildirim Demiroren, a wealthy businessman who has lent Besiktas just under $100 million. “Some suspect that he is using the fund to buy players as the only way to get his money back,” a Turkish soccer official said.
An investment fund helped Besiktas early this year acquire three Portuguese players -- Hugo Almeida, Simao Sabrosa and Manuel Fernandes. Prominent Portuguese agent Jorge Paulo Agostinho Mendes is believed to be one of the investors in the fund that made the transfer possible. Fans initially welcomed the three players but have since turned against them accusing them of acting as a group and obstructing the club’s success.
A Spanish fund managed by Banco Espirito Santo SA (BES) has achieved returns of more than 60 per cent per player, according to Mr. Tebas.
Lisbon-based Espirito Santo, which manages the Benfica All Stars fund bet in 2009 $62 million on the rights of 24 players contracted to the Portuguese club, according to team filings. Bloomberg calculated that the $6.15 million purchase of 20 per cent of the rights of playmaker Angel di Maria yielded a return of as much as 64 per cent once he joined Real Madrid for some $50 million.
“This is a short-term fix that only benefits a select group of investors and team owners. It’s no way to develop a soccer team,” Bloomberg quoted Jose Luis Sanchez, head of Senales de Humo, an Atletico fan club, as saying.
James M. Dorsey is a Senior Fellow at the S. Rajaratnam School of International Studies (RSIS), Nanyang Technological University and the author of the blog, The Turbulent World of Middle East Soccer
Bahrain Besiktas Qatar Turkey UAE