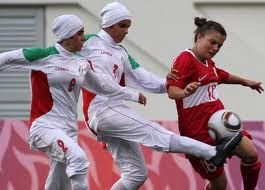 A less sinister issue: Iran and Turkey with different ideas about proper uniforms
In the past, issues related to sports in the Middle East have often tended to focus on the impact of religion and culture on the opportunities for athletes. In particular, the impediment for aspiring women athletes have been the subject of discussion, from outright prohibitions to the complications caused between the mismatch between traditional garb and the prescribed uniforms in different sports.
There have also been reasons to discuss political aspects, including strife or tensions between different Muslim countries or in their relations with Israel or with East Asia, the latter given the importance of continental Asian competitions. But over the past year, I have had reason to write articles about the impact on sports during the uprisings in Tunisia and Egypt, both of which are prominent handball countries, and about the outright persecution against athletes during the political protests in Bahrain.
It was therefore with great interest that I looked forward to the theme of Sports in the Middle East on the agenda of the ‘Play the Game’ conference. To some extent it was a letdown, as some key speakers cancelled, but this was made up for by the presence of an engaging and knowledge speaker in the person of James M. Dorsey, a Singapore-based scholar who also has a great blog. I can really recommend the blog (mideastsoccer.blogspot.com), where James combines his intimate knowledge of the region with a great passion for soccer and other sports. My search efforts on the web have been greatly facilitated by the discovery of his site, and some of the tidbits below have been provided by him.
Apropos Bahrain, James has followed through on the sad situation where, among others, a major soccer star by the name of Alaa Hubail remains jailed (and apparently tortured) for no clear reason, after his brother and other friends have been released. It is also intriguing that Bahrain was drawn against Iran in the preliminary rounds of the qualifying for the 2014 World Cup in soccer. After all, one of the stated fears on the part of the Bahraini government is of course the potential Iranian influence over the Shiite population in Bahrain. (Iran easily won the home game, and the game in Bahrain resulted in a tie; Iran is through to the next round, while most likely Bahrain will be eliminated).
In countries where the population is suppressed, one of the few types of groups that could emerge as strong, determined and well-organized are the fanatic supporters of the top soccer teams. This has been particularly obvious in Egypt, where these groups played a strong role in the initial uprising and now again when in recent days Tahrir square again has become the scene of massive protests and violence. This connection has repeatedly caused the military to undertake crackdowns against the fan clubs and to cancel matches that could be suspected to fuel the flames.
Qatar has of course been in focus after the FIFA decision to award the 2022 soccer World Cup to this country with an almost surreal plans to construct a huge number of air-conditioned stadiums to deal with the +50 C (122 F) temperatures. These plans now seem to have been dismissed as unsustainable by the architect charged with designing them. At the same time, major protests from large global trade unions, such as ITUC, have become a new concern. It is well-known that 90% of the work force in Qatar consists of imported workers who live and work under extremely difficult conditions. The charge from the ITUC uses labels such as ‘modern-day slavery’.
The current uprising in Syria also has elements of politics mixing with sports. It seems that successes in soccer is such a propaganda tool, that the cynical Syrians are now accused by their Lebanese neighbors of blatant cheating in international games at the junior level. In a desperate effort to have better results, apparently the Syrians did not hesitate to insert a large number of ineligible over-age players in their line-up. A somewhat more sinister story involves the family of their young national team goalkeeper, from the town of Homs, which has been a focal point for the uprising. The goalkeeper has emerged as protest leader, after his brother and several friends were killed by government troops.
Finally, Israel has often been found in the center of conflicts in sports, when its teams and athletes have received a less than friendly reception in other countries, or when certain Arab countries have forfeited games rather than having to play against Israel. But now it seems that internal politics is having an impact. A small number of soccer teams in Israel consist primarily of non-Jewish Israeli citizens, typically of Palestinian origin. Some of the players are good enough to make it to Israeli national teams at different levels. But now there has been legislation introduced in the parliament, under which this would not be allowed, unless these non-Jewish players declare allegiance to Israel as a Jewish state, and furthermore sing along in the Israeli national anthem which talks about a Jewish state and about ‘free people in the land of Zion’.
Yes, sports can indeed be (mis)used as an effective weapon in politics!
Egypt Israel Palestine Soccer