Showing posts from June, 2012
Show all

June 30, 2012
28-Jun-2012 19:07 By Luke Pachymuthu and Lee Yen Nee SINGAPORE, June 28 (Reuters) - Singapore's fuel oil imports from Iran fell nearly 60 percent from their 2012 peak in June, as the city state applies pressure to oil firms to reduce trade with the Islamic Republic to win an exemption from U.S. sanctions. The U.S. has granted waivers to major importers of Iranian crude such as India, Japan and South Korea, leaving just Singapore and China facing the threat of penalties that apply from Thursday and that could hurt the island's important financial industry. International Enterprise (IE) Singapore, the country's trade agency, increased pressure on oil firms to reduce trade with Tehran following the visit of a senior U.S. diplomat, an official source familiar with the matter said. "Another round of calls (was made) to re-emphasize the broader implications of doing business with Iran, the companies are receptive," the source said. The Ministry of Foreign
Post a Comment
Read more

Amid development failures, some see reduced foreign aid as a boon to Afghanistan

June 26, 2012
EXCLUSIVE FEATURE: AFGHANISTAN Amid development failures, some see reduced foreign aid as a boon to Afghanistan By  James M. Dorsey  on 25 June 2012   in Share Two small boys hold socks they received during a humanitarian aid mission organized by the U.S. Air Force in Kabul, Afghanistan. Photo by:  isafmedia  /  CC BY-NC-SA As Afghanistan braces for reduced foreign aid as part of the NATO drawdown over the next two years, some government and aid officials - current and former - view an expected drop in international support as a blessing in disguise despite the likely negative impact on the local economy. These officials argue that lower aid levels will force Afghanistan to become less aid dependent and limit opportunities for rampant corruption. More importantly, they say, foreign aid that builds up the Afghan government and tackles long-term objectives like infrastructure could create a path to truly sustainable development in a countr
Post a Comment
Read more

Saudi Arabia to allow women to compete in London Olympics 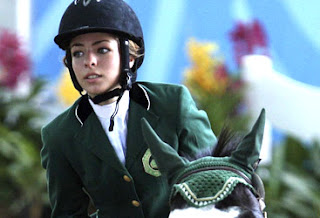 Dalma Rushdi Malhas, Saudi Arabia's likely female Olympic athlete By James M. Dorsey Saudi Arabia, in a sudden turnabout has lifted its ban on women athletes competing in international tournaments little more than a week after the death of Crown Prince Nayef bin Abdul Aziz, an opponent of women’s participation in global sports events. It was not immediately clear what prompted the reversal that was announced in a statement by the Saudi embassy in London. A Saudi women equestrian is expected to be the conservative kingdom’s only female athlete likely to qualify for next month’s London Olympics. The kingdom does not encourage women’s sports, offer girls physical education in public schools or include women in its national sports plan. The embassy statement followed months of sea-saw pronouncements on whether women would be allowed to compete in London, topped in April by a statement by Prince Nayef categorically ruling out. Prince Nayef, largely viewed as a conse
Post a Comment
Read more

The man at the epicentre of Egyptian football (JMD quoted)

The man at the epicentre of Egyptian football Aaron Ross Jun 23, 2012   Save this article                     One-page article Samir Zaher, the man who brought Bob Bradley to Egypt, is all apologies after showing up more than an hour late for an interview. Related ■  Egypt's Ultras have shown military rule the red card ■  Mubarak's influence dies hard Topic   Egypt election He has been very busy, he explains, campaigning for Ahmed Shafiq, Hosni Mubarak's final prime minister and one of the finalists in last week's run-off in Egypt's first post-Mubarak presidential election. These days, it is his prize recruit, the American coach Bradley, who commands the sports headlines in Egypt with the national football team in the midst of qualification for the  2014 World Cup  and 2013 African Cup of Nations. But in an Egypt, where sport and politics have long been intertwined, the three terms and 10 years Zaher served as
Post a Comment
Read more

June 23, 2012
By James M. Dorsey Sudanese students are demanding the fall of President Omar Hassan Ahmed al-Bashir’s government in growing daily demonstrations that come 15 months after student protests nearly forced the African Football Confederation to deprive Sudan of the hosting of an African soccer tournament. Like in February of last year, attempts by security forces using tear gas have only boosted the demonstrators’ ranks with other population groups joining the week-old protests that erupted after the government announced spending cuts. Hundreds of Sudanese of various walks of life joined the students after Friday prayers chanting the Arab world’s all too popular slogan: “The people want to overthrow the regime.” Mr. Bashir is wanted by the International Criminal Court on charges of war crimes and crimes against humanity related to the Sudanese crackdown against rebels in the Darfur region. This week’s protests have already lasted longer than last year’s and it rema
Post a Comment
Read more
More posts