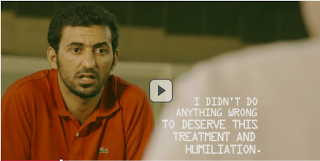 Alaa Hubail (Source: ESPN)
By James M. Dorsey
Bahrain’s soccer superstar and all-time top scorer goes on trial this month for his participation in mass anti-government protests on the Gulf island for which his brother and fellow national team member Mohammed was already sentenced to two years in prison.
Neither Alaa or Mohammed will be part of Bahrain’s lineup on Friday for the team’s second World Cup qualifier. The brothers’ together with defender Sayed Mohammad Adnan were fired for their part in the protests and imprisoned for three months together with some 150 other sports figures. Many like Mohammed were sentenced in secret military trials.
The national team is feeling the absence of Alaa, who singlehandedly was responsible for Bahrain only narrowly failing to make it to the last two World Cup finals. Bahrain last month lost its first 2014 qualifier against Iran 6:0.
Instead of playing in front of crowd of 30 to 40,000 people chanting his name and earning substantially, Alaa now plays for several hundred fans of a relatively obscure Omani club that pays him $10,000 for the season. Mohammed is free pending his appeal while Mr. Adnan has sought refuge with Australia’s Brisbane Roar.
“I didn’t do anything wrong to deserve this treatment and humiliation,” Alaa said in an interview with ESPN as part of a 12-minute report on the island’s crackdown on dissident sports figures.
The problems of the Hubail brothers and Mr. Adnan began in February when they attended a protest rally by sports people at which Alaa spoke.
Authorities acted in the spirit of Sheikh Nasser bin Hamad al Khalifa, head of Bahrain’s Supreme Council for Youth and Sport as well as its Olympic Committee and fourth son of King Hamad, who said, according to ESPN: “Whoever calls for the fall of the regime, may a wall fall on his children.”
Some 30 people were killed in the government’s brutal crackdown that effectively squashed the island’s popular revolt early this year and drove the mass anti-government protests out of the capital Manama and into smaller village demonstrations out of the
Alaa and other sports figures were denounced as spies and traitors on state television.
“That Bahraini crowd that loved you, who carried you and chanted your name, 30-40,000 fans at the stadium calling your name, did you forget them in this moment?” the show’s host asked Alaa over the telephone.
“No, I didn’t forget them,” Alaa responded limply.
“Yes you did,” the host shot back.
A day after the broadcast, masked state security police men arrived at the national soccer team’s training ground. Alaa and his brother were taken to what Alaa described to ESPN as an unknown place.
“They put me in the room for beatings. One of the people who hit me said: ‘I’m going to break your legs.’ They knew who we were. There was a special room for the torture.”
His words are echoed in ESPN interviews with table tennis champion Anwar al-Makki and sports journalist Faisal Hayyat.
“They would bring an electric cable, blindfold the person and put them on the floor,” Mr. Makki said.
“I was blindfolded. I couldn’t see what was happening. He put a cable in my hand and said: Now I’ll turn the electricity on,’” Mr. Hayyat added.
“We were living in a nightmare of fear and horror. We were forced to endure it. I had to endure it. If I didn’t something worse would have happened to me,” Alaa said.
Since his release, Alaa has virtually vanished from Bahrain’s public eye. “At the moment, I don’t know who you are talking about,” Peter Taylor, the national team’s coach who was appointed in July after Alaa’s banning, told ESPN.
Sheikh Ahmed Bin Hamad Al Khalifa, the vice-chairman of the Bahrain Olympic Committee, defended the crackdown on the athletes and alternatively denied and downplayed the allegations of torture.
“You have to defend yourself, you have to protect the law and you have to take decisions on the ground,” Sheikh Ahmed said. He said the crackdown had been “absolutely” proportionate and justified.
Asked about what happened to the athletes once they were detained, Sheikh Ahmed first said: “When they were detained? Nothing.” But pressed about the torture allegations, he added: “We heard many stories how can we say for fact this happened?”
ESPN's E;60: The Athletes of Bahrain
James M. Dorsey is a senior fellow at the S. Rajaratnam School of International Studies at Nanyang Technological University in Singapore and the author of the blog, The Turbulent World of Middle East Soccer.
Bahrain