Showing posts from August, 2016
Show all

RSIS Commentary is a platform to provide timely and, where appropriate, policy-relevant commentary and analysis of topical issues and contemporary developments. The views of the authors are their own and do not represent the official position of the S. Rajaratnam School of International Studies, NTU. These commentaries may be reproduced electronically or in print with prior permission from RSIS and due recognition to the author(s) and RSIS. Please email: RSISPublications@ntu.edu.sgfor feedback to the Editor RSIS Commentary, Yang Razali Kassim.
No. 220/2016 dated 31 August 2016

The Turkish government’s sweeping crackdown across the public services in the wake of a failed military coup in July has highlighted a deep-rooted flaw in Turkish democracy: the politicisation of Turkey's bureaucracy and judiciary.

August 31, 2016
Middle Kingdom eyes abigger role in the Middle East Kor Kian Beng China Bureau Chief In Beijing PUBLISHED AUG 30, 2016, 5:00 AM SGT How China handles its involvement may pose ramifications on other fronts, like its strategic rivalry with the US A recent deal on military cooperation between China and Syria is viewed as a deepening of Beijing's policy towards direct engagement in the domestic affairs of Middle Eastern states, despite its long-held principle of non- interventionism. Observers say how China handles its Middle Eastern involvement would not only affect its influence and interests in the region but also pose ramifications on other fronts, like its strategic rivalry with the United States. An Aug 15 meeting between China's Rear-Admiral Guan Youfei and Syrian Defence Minister Fahad Jassim al-Freij in Damascus saw both sides reaching a consensus on the People's Liberation Army providing personnel training and humanitarian aid to the Syrian military. Though there have been m…
Post a Comment
Read more

Gulf autocrats and sports corruption: A marriage made in heaven

Remarks at 2016 Exeter Gulf Conference
Global soccer and global sports governance have for the past nine years and certainly since a fateful meeting in late 2010 of the executive committee of FIFA, the world soccer body, witnessed crisis after crisis. Invariably the scandals involved corruption: financial corruption, political corruption or corruption of sporting performance.
Invariably, Gulf autocracies were at the centre of the financial and political corruption scandals. The 2010 FIFA meeting awarded Qatar its hosting rights, fuelling already widespread suspicions of massive corruption of global soccer governance and the awarding of one of the world’s foremost sporting mega events. At the centre of that scandal was the now banned and disgraced Qatari soccer executive Mohammed Bin Hammam. And lurking in the shadows behind Bin Hammam was former Qatari Emir Sheikh Hamad Bin Khalifa Al Thani, and his son and current emir, Sheikh Tamim bin Hamad Al Thani.
Bin Hammam’s successor as head…
Post a Comment
Read more

This book project on Saudi public diplomacy using primarily the kingdom’s financial muscle has had a long gestation. It focuses on the impact of various policies of the kingdom on Muslim communities and nations across the globe.
In doing so, I will concentrate on Saudi government policy and actions as well as those of senior members of the ruling Al Saud family rather than wealthy individuals who may or may not be associated with them. As a result, theological and ideological differences between various expressions of Muslim ultra-conservatism fall beyond the parameters of what I am looking at.
My thinking on this has evolved in the past year despite having covered the Saudi efforts for many years from very different angles and multiple geographies. The evolution of my thinking is reflected in the fact that were I looking today for a title for these remarks, I’d call it Saudi export of ultra-conservatism rather than Wahhabism. The reason is simple: Saudi export and global support for re…
Post a Comment
Read more 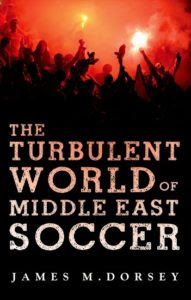 FSF September: The Turbulent World of Middle East Soccer with James DorseyAugust 17, 2016alegiUncategorized
Our seventh season begins on September 19, 2016, with a discussion of FSF member James Dorsey’s long-awaited new bookThe Turbulent World of Middle East Soccer. [For the UK edition click here]. Dorsey is a journalist and a senior fellow at the S. Rajaratnam School of International Studies at Singapore’s Nanyang Technological University. His blog on Middle East soccer “(has) become a reference point for those seeking the latest information as well as looking at the broader picture,” notes FSF member Alon Raab. The book, according to the publisher’s website, examines the game “as an arena where struggles for political control, protest and resistance, self-respect and gender rights are played out. Football evokes deep-seated passions and offers unique insight into the region. Examples include clandestine Saudi women football clubs; political demonstrations at Algerian matches; Somali…
Post a Comment
Read more 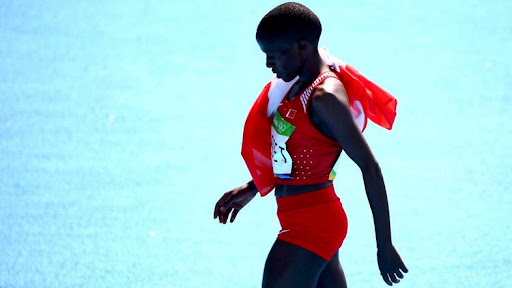 Do African, Eastern European athletes make better Arab Olympians?
Ruth Jebet of Bahrain leaves track after winning the race. (Reuters) By Ismaeel NaarAl Arabiya EnglishFriday, 19 August 2016 Text size AAA It is every athlete’s dream to win an Olympic medal and celebrate with their own national anthem being played before them while draped in their country’s flag. While Arabs worldwide have so far celebrated 12 of their own during the Rio Olympics, at least three of those athletes stood before a country and anthem not originally their own. Bahrain made headlines by winning gold and silver medals when Ruth Jebet came first in the 3,000 meters steeplechase and Eunice Jepkirui Kirwa came second in the marathon. Both had represented Kenya in the past. The United Arab Emirates (UAE) won its second Olympic medal ever via Moldovan-born Sergiu Toma in judo. The importing - some go as far as saying purchasing - of athletes from Africa and East Europe has been criticized over the years as affectin…
Post a Comment
Read more
More posts