Emirates condemns racism in a swipe at FIFA president Blatter 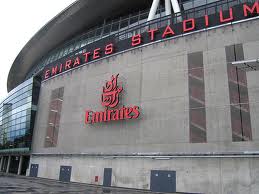 By James M. Dorsey
Emirates Airlines, a prominent sponsor of FIFA, is emerging as the most critical of the world soccer body’s corporate sponsors with a statement on Sunday stressing that it "completely abhors racism" and supports efforts to abolish "all forms of discrimination in football."
The Dubai carrier, one of the world’s foremost airlines, issued its statement days after FIFA president Sepp Blatter sparked controversy by denying that there was racism on the soccer pitch and that racial incidents could be settled by a handshake.. Mr. Blatter has since said that his remark was misunderstood and that he was sorry.
The Emirates statement followed a warning earlier this month that it was considering discontinuing its sponsorship because of Mr. Blatter’s handling of the worst corruption scandal in its 107-year history. Emirates' eight-year, $195 million sponsorship deal expires in 2014.
In its statement on racism, Emirates said it was watching closely developments in FIFA but stressed that it has "no role in the management of the organization."
The statement stopped short of criticizing Mr. Blatter directly.
Emirates divisional senior vice president of corporate communications Boutros Boutros told Australia’s B&T Media earlier this month that “we are seriously thinking about not renewing our partnership with FIFA beyond 2014.”
The fact that Emirates felt the need to condemn racism does not bode well for its relationship with FIFA.
FIFA has expressed surprise at Mr. Boutros’ comment and said it was seeking clarification from Emirates. It said that it has “very positive relationship with all of our commercial affiliates and media rights licensees.” It said sponsors had demonstrated their confidence in FIFA by extending contracts until the 2022 World Cup.
Emirates said had “not yet commenced discussions with FIFA on the extension of our partnership agreement beyond 2014. Discussions will begin in due course.”
FIFA generated about $4 billion from television and marketing contracts for the last World Cup, held in South Africa in 2010. It’s sold out its global sponsorship packages for the next tournament in Brazil in 2014.
Nonetheless, a series of FIFA corruption scandals in the past year that have spooked sponsors, who pay millions to be associated with the World Cup, sport’s most-watched event. Mr. Blatter has vowed to stamp out corruption.
In the worst of multiple scandals, FIFA in July banned for life its vice president and suspended Asian Football Confederation (AFC) chief Mohammed Bin Hammam from involvement in soccer because of an alleged attempt to bribe Caribbean Football Union officials. Mr. Bin Hammam, a Qatari national, has denied any wrong doing and is appealing his ban.
FIFA has further given executive committee member Worawi Makudi until December 1 to prove that FIFA development funds were invested in property belonging to the Thai football association rather than himself.
A British parliamentary committee demanded in early November that FIFA launch an independent investigation into the last December’s awarding of the 2018 and 2022 World Cups to Russia and Qatar.
In an article in The Huffington Post, Damien Collins, a member of the parliamentary committee suggested that Mr. Blatter’s comment on racism demonstrated that “he is no longer able to lead football's world governing body, and it would be better for him and the game if he would stand aside.”
Mr. Collins noted that “six months ago, Sepp Blatter promised reform at FIFA, yet in reality little has changed. There has yet to be a truly independent investigation into allegations of corruption made against FIFA executives during the bidding process to host the 2018 and 2022 World Cups.In the last year, 11 of the 24 leading members of FIFA, who make up its executive committee, have faced serious allegations of corruption.”
Brazilian authorities have requested Swiss court documents that allegedly link Ricardo Texeira to money laundering and kickbacks involving FIFA as well as International Olympic Committee (IOC) officials, including Nicolas Leoz and Mr. Makudi as well as African Football Confederation chief Issa Hayatou. The scandal is to be discussed next month at separate IOC and FIFA executive committee meetings who will be presented by a report into the scandal first disclosed by the BBC that was drafted by the IOC’s ethics committee. Mr. Blatter told a German newspaper this weekend that Sepp Blatter that he expects at least one member of FIFA's executive committee to leave his post because of the ISL kickbacks case.
Emirates signed its eight-year sponsorship contract with FIFA in 2006. Along with other lead partners, including Adidas AG, Sony Corp., Visa Inc. and Coca-Cola Co., it expressed concern about claims of impropriety within the organization in May when Mr. Bin Hammam was initially suspended and withdrew his challenge to Mr. Blatter in a FIFA presidential election.
Emirates’ Mr. Boutros suggested that the Dubai airline was considering its sponsorship of the World Cup because of FIFA’s lack of transparency.
“As a sponsor you expect they will come and write to you in the middle of the issue or at the end of it. To them they act as if it’s nothing for sponsors. For us, in our history of sponsorship, it is the only event that when it happened our clients started writing to us saying ‘why do you support this organization?’ We don’t get into politics but we believe the situation with FIFA went beyond an internal problem and became much bigger,” Mr. Boutros said.
James M. Dorsey is a senior fellow at the S. Rajaratnam School of International Studies at Nanyang Technological University in Singapore and the author of the blog, The Turbulent World of Middle East Soccer.
Blatter FIFA UAE