Showing posts from December, 2012
Show all

By James M. Dorsey The recent election of former soccer player Ahmed Eid Alharbi as the first freely chosen head of the Saudi Football Federation (SFF) in a country that views polling as an alien Western concept masks regional fears of the impact of popular revolts that have swept the Middle East and North Africa. It also constitutes the first time that autocratic rulers have sought to reduce their identification with soccer in a break with a tradition that employs the beautiful game in a bid to polish their tarnished images. “Words such as freedom of choice, equality, human rights, rational thinking, democracy and elections, are terms we came to view with high concern and suspicion. We treat them as alien ideas that are trying to sneak within our society from the outside world. But last week an amazing and irregular event took place, in one of our sporting landmarks. The members of the General Assembly of the Saudi Arabian Football Federation (SAFF) have elected through po
Post a Comment
Read more 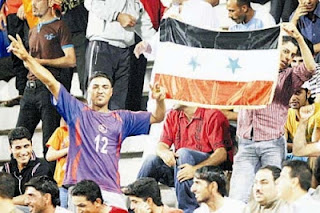 Syrian support their national team's victory ﻿ By James M. Dorsey Supporters of Syrian president Bashar al-Assad portrayed this weekend’s winning of the West Asian soccer championship by defeating Iraq as a unifying, national achievement against all odds. Yet, Syria’s success 22 months into an increasingly brutal civil war hardly constitutes the equivalent of Iraq’s winning of the Asian Cup in 2007 at the peak of that country’s sectarian violence. The Syrian national team, unlike its Iraqi counterpart five years ago, is moreover incapable of offering Syrians any hope of an end to the bloodshed and greater unity. "I give this win and this worthy title to the Syrian people. I thank God that we succeeded in bringing happiness to the sad people," said Syrian striker Omar Al Soma in a televised interview after the match. Syrian state-run television, responding to news reports of a power cut in Damascus, charged that "even football has not escaped the bloodt
Post a Comment
Read more

Pitched Battles: The Role of Ultra Soccer Fans in the Arab Spring