Showing posts from May, 2020
Show all

Israel-China Relations: Staring Into the Abyss of US-Chinese Decoupling 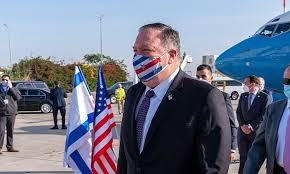 By James M. Dorsey A podcast version of this story is available on Soundcloud, Itunes , Spotify , Stitcher , TuneIn , Spreaker , Pocket Casts , Tumblr , Podbean, Audecibel , Patreon and Castbox. Israel knew the drill even before US Secretary of State Mike Pompeo boarded his flight to Tel Aviv earlier this month four days after the death of his father. It was Mr. Pompeo’s first and only overseas trip since March. Echoing a US warning two decades ago that Israeli dealings with China jeopardized the country’s relationship with the United States, Mr. Pompeo’s trip solidified Israel’s position at the cusp of the widening US-Chinese divide. Two decades ago the issue was the potential sale to China of Israeli Phalcon airborne warning and control systems (AWACS). Israel backed out of the deal after the US threatened withdrawal of American support for the Jewish state. This month the immediate issue was a Chinese bid for construction of the world’s largest desal
Post a Comment
Read more

Will Gulf States Learn From Their Success in Handling the Pandemic? 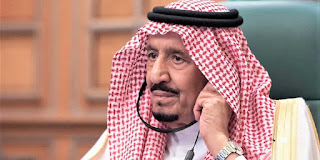 by  James M. Dorsey  | May 27, 2020 This story was first published in Inside Arabia A podcast version of this story is available on Soundcloud, Itunes , Spotify , Stitcher , TuneIn , Spreaker , Pocket Casts , Tumblr , Podbean, Audecibel , Patreon and Castbox. By and large, Gulf states garnered public trust with degrees of transparency in their handling of the pandemic and its associated economic crisis. Retaining that trust going forward will depend on Gulf rulers’ willingness to embrace transparency when it comes to policies designed to spark economic recovery and govern structural reform. The economic fallout of the coronavirus pandemic for Gulf states has done far more than play havoc with their revenue base and fiscal household. It has propelled massive structural change to the top of their agenda in ways that economic diversification plans had not accounted for. Leave aside whether Gulf states can continue to focus on high-profile, attention-grabbing
Post a Comment
Read more 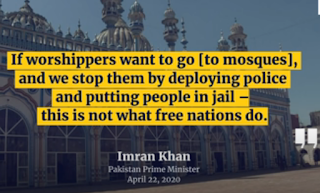 By James M. Dorsey and Tehmina Qureshi A podcast version of this story is available on Soundcloud, Itunes , Spotify , Stitcher , TuneIn , Spreaker , Pocket Casts , Tumblr , Podbean, Audecibel , Patreon and Castbox. US President Donald J. Trump and ultra-conservative Pakistani religious scholars may have more in common than either would want to admit: a belief that congregation is an essential pillar of prayer irrespective of public health concerns. Mr. Trump, however, may wish that he had the kind of less polarized and/or more compliant audience that Pakistani clerics address. Scores of religious leaders and groups in the United States have sought to protect their communities by advocating virtual rather than physical congregation at the time of a pandemic in which the coronavirus has yet to be brought under control. Religious authorities in much of the Muslim world, Pakistan being the exception that proves the rule, have heeded government instruction
Post a Comment
Read more 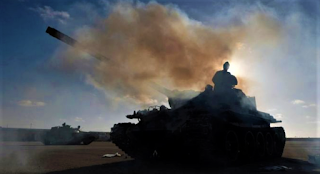 by James M. Dorsey | May 22, 2020 This story was first published in Inside Arabia A podcast version of this story is available on Soundcloud, Itunes , Spotify , Stitcher , TuneIn , Spreaker , Pocket Casts , Tumblr , Podbean, Audecibel , Patreon and Castbox. The United Arab Emirates and Turkey are locked into a regional power struggle that has fuelled conflict in Libya and could spark renewed fighting in Syria. It is a struggle, like that between Saudi Arabia and Iran, that threatens to keep the Middle East and North Africa on edge. While Saudi Arabia may in some ways have a leg up on Iran, Turkey and the UAE are at a virtual draw. In Libya, forces of the Turkish-backed, Tripoli-based internationally recognized Government of National Accord (GNA) are pushing UAE-backed rebels led by renegade Field Marshall Khalifa Haftar out of western Libya. Mr. Haftar further enjoys support from Saudi Arabia and Egypt with whom Turkey is also at odds. In contrast
Post a Comment
Read more

Israel Shines in the Gulf Where Big Powers Falter, but That Could Prove Tricky

FIREFLY, a miniature tactical loitering weapon system which is part of the SPIKE missile family (Photo RAFAEL Defense Systems- Twitter) by James M. Dorsey  This story was first published in Inside Arabia A podcast version of this story is available on Soundcloud, Itunes , Spotify , Stitcher , TuneIn , Spreaker , Pocket Casts , Tumblr , Podbean, Audecibel , Patreon and Castbox. Israel is proving to Gulf states that it is a more reliable partner in some respects than big powers like the United States, China, or Russia. But the limits of cooperation with Israel could come to the forefront at a time of economic crisis in which Gulf states are likely to have to renegotiate long-standing social contracts. The  Firefly , an Israeli-built loitering kamikaze drone, part of the Spike family of missiles that the Jewish state has sold to various European nations, may be one reason why Gulf states, and particularly Saudi Arabia, have cozied up to Israel in a seeming r
Post a Comment
Read more

The potential dark side of the militarization of Gulf societies 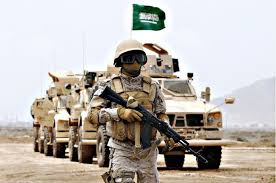 By James M. Dorsey A podcast version of this story is available on Soundcloud, Itunes , Spotify , Stitcher , TuneIn , Spreaker , Pocket Casts , Tumblr , Podbean, Audecibel , Patreon and Castbox. The coronavirus pandemic’s economic fallout calls into question Gulf states’ ability to fund a brewing, costly regional arms race . That in turn could not only reshape their geopolitical posture but also efforts to make the military a pillar of a new national identity at a time that they are forced to renegotiate outdated social contracts. A significant drop in revenues, as a result of the collapse of oil and gas prices and vastly reduced global demand, raises the question whether countries like Saudi Arabia, the United Arab Emirates and Qatar, can maintain huge military expenditures that rank them among the world’s foremost arms buyers. Saudi and UAE expenditure was driven by a perceived need to counter Iranian advances in the development of ballistic missiles and dr
Post a Comment
Read more
More posts