Showing posts from December, 2015
Show all

Soccer: Iranian moderates and hardliner lock horns on the pitch 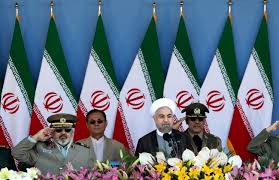 By James M. Dorsey Iranian President Hassan Rouhani suffered in the run-up to crucial elections in early 2016 what amounted to at least a symbolic defeat when state-run television banned Iran’s most popular soccer program from running an interview with his foreign minister, Mohammad Javad Zarif, on soccer and politics. Amid confusion about the reason for the ban, Iranians worried that not only was their beloved, already highly politicized sport being dragged further into the country’s power struggle but also that government-controlled television was taking sides in a partisan struggle. Iranian media reported that Islamic Republic of Iran Broadcasting (IRIB), the country’s broadcast authority, had banned Mr. Zarif’s appearance because of his liberal views and the fact that his appearance on the soccer show might brand him as a leader in the mould of nationalist president Mohammed Mossadegh, who was toppled in 1953 in a US and British-backed coup. “Iran's socc
Post a Comment
Read more 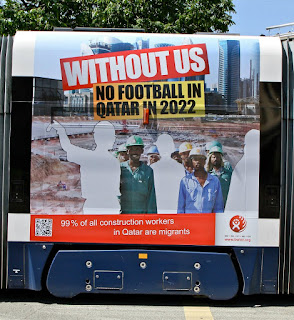 By James M. Dorsey International trade unions have stepped up pressure on Qatar with a series of demands, a majority of which the Gulf state could implement without having to reform its autocracy or threaten the privileged position of its citizenry who account for a mere 12 percent of the population and fear that change could cost them control of their culture and society. The demands in a report by the International Trade Union Confederation (ITUC) that also include calls for changes that would challenge autocratic rule, come at a time that world soccer body FIFA could become obliged to more forcefully pressure Qatar to move beyond baby steps it has already taken towards speedy implementation of far-reaching reform of its kafala or sponsorship system that puts employees at the mercy of their employers. Many of the ITUC demands are likely to be on FIFA’s list if it implements recommendations to incorporate UN human rights guidelines in all its procedures, processes
Post a Comment
Read more 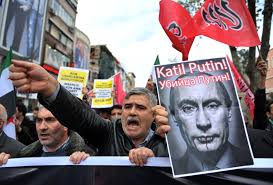 By James M Dorsey The escalating Turkish-Russian crisis following Turkey’s downing in November of a Russian war plane promises to spill onto European soccer pitches with FC Lokomotiv Moscow set to play Fenerbahce SK, notorious for its fiery fan base, in a Europa League match. With Russia seeking to punish Turkey with punitive economic and sporting sanctions and Russian President Vladimir Putin refusing this week to meet his Turkish counterpart, Recep Tayyip Erdogan, the expected clash between the two teams as well as between fans is likely to not only raise tempers in both countries. It will also demonstrate once more the inextricable relationship between sports and politics at a time that world soccer body FIFA unwittingly is putting the incestuous ties between the two high on its agenda by seeking advice on how to embed United Nations guidelines on human rights into its processes, procedures and decision-making. Ignoring Mr. Putin’s snub, Turkish Prime Ministe
Post a Comment
Read more 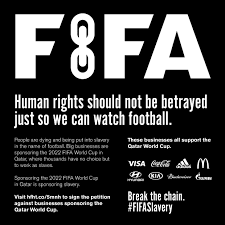 By James M. Dorsey Ridden by the worst corruption scandal in its history, world soccer body FIFA is breaking new ground by seeking to put United Nations guidelines for human rights at the centre of its activities. If fully implemented, the move would not only set a precedent for other international sports associations but could also have far-reaching consequences for FIFA’s future selection of World Cup hosts, current tournament hosts Russia and Qatar, and the eligibility of various members of the executive boards of the group and its regional soccer federations. The move would also put centre stage the relationship between politics and sports in general and soccer in particular. With human rights inextricably linked to politics, the initiative makes it more difficult, if not impossible, for FIFA to maintain its position that sports and politics are separate. Denial of the incestuous relationship between the two has allowed FIFA and other international sports as
Post a Comment
Read more 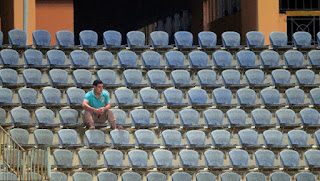 By James M Dorsey Egyptian law enforcement authorities and the Egyptian Football Association (EFA), in a reflection of fears that stadia in Egypt could once more emerge as platforms for anti-government protest, have extended a ban on spectators attending matches that has been in place for much of the last five years. The decision dashed expectations that the ban would be lifted in February with a new competition season. It comes against the backdrop of repeated Egyptian poor performance in international tournaments that many blame on the absence of fan support at matches. Sports minister Khaled Abdel-Aziz used last month’s jihadist attacks in Paris as well as the cancellation of an international soccer match in Germany because of an alleged threat by the Islamic State to justify continued closure of Egyptian stadia. “There’s no need to be hurried on fans’ return as the world is on the edge of a cliff,” Mr. Abdel-Aziz said. Egypt has failed to suppress its ow
Post a Comment
Read more

By James M Dorsey and Mushahid Ali As the threat from Islamic State (also known as IS or ISIS or by its Arabic acronym of Daesh) continued to grow, US-led coalition forces intensified their aerial attacks on IS militants and strategic installations in Syria and Iraq, in a concerted effort to destroy and degrade the self-styled caliphate. However, far from caving in, IS has expanded its territorial reach by moving across the Mediterranean Sea into Libya's coastal region, the Sahel and West Africa. Some scholars argue that the ability of IS to attract foreign fighters as well as idealistic Muslims from across the globe willing to become cannon fodder in suicide missions at home, make it a lethal force and very dangerous to any government willing to confront it. These analysts say that the militants' ideology has been fuelled by the austere and puritanical interpretation of Islam by Saudi Arabia, a country which has significantly advanced Salafi-Wahhabi beliefs (a
Post a Comment
Read more 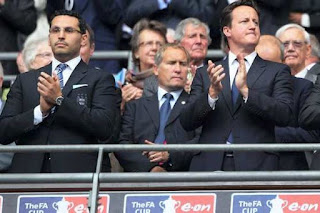 Manchester City chairman Khaldoon Al Mubarak with Prime Minister David Cameron at an FA Cup final By James M. Dorsey A $400 million sale by a senior member of the UAE ruling family of a 13 percent stake in Manchester City FC to China Media Capital (CMC), a subsidiary of China Media Group Corporation (CMG), a state-backed investment conglomerate, highlights the importance of soccer in the two countries’ ambitions to project themselves on the international stage. The sale, which values Manchester City at $3 billion, puts to bed any suggestion that Sheikh Mansour bin Zayed al Nahayan’s original $400 million acquisition in 2008 of the then troubled English club was an act of vanity. It further underscores the UAE’s development from what Bloomberg news called the Switzerland of the Gulf to its military and diplomatic Sparta. The sale is part of a bid to employ the UAE’s financial muscle to project the Gulf state despite its small population and loose federal structure as
Post a Comment
Read more Qatar’s World Cup hero becomes invisible man by David Harding AFP/File / Fabrice Coffrini Mohammed bin Hammam, pictured on May 29, 2011, has become Qatar's invisible man -- tainted by the scandal that has engulfed world football This should be a time of celebration for Mohamed bin Hammam, the man who achieved the impossible and brought the World Cup to Qatar. Doha (AFP) His beloved Al Rayyan football team have just set a Qatar Stars League record by winning their first 10 games of the season to dominate the standings. And on Wednesday, five years will have passed since his spectacular achievement in persuading FIFA to award sport’s most watched event for the tiny desert Gulf state in one of the most controversial votes in sporting history. But the 66-year-old tycoon has become Qatar’s invisible man — tainted by the scandal that has engulfed world football. Since his spectacular fall began in 2011, when his decision to challenge Sepp Blatter for the FIFA
Post a Comment
Read more 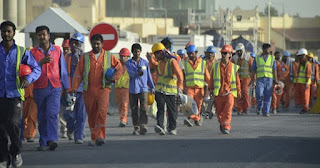 By James M. Dorsey Words but no actions. That is Amnesty International’s evaluation of promised Qatari labour reforms on the fifth year of the awarding of the 2022 World Cup hosting rights to the Gulf state. Qatar’s failure to enact wide-ranging reforms heightens the risk of its hosting rights being called into question against a backdrop of legal investigations into the integrity of its bid and world soccer body FIFA presidential elections that could spur increased pressure on the Gulf state in FIFA’s bid to put a massive corruption scandal that involves Qatar behind it. In a statement , Amnesty researcher Mustafa Qadri, asserted that “too little has been done to address rampant migrant labour abuse. Qatar’s persistent labour reform delays are a recipe for human rights disaster... Unless action is taken – and soon – then every football fan who visits Qatar in 2022 should ask themselves how they can be sure they are not benefiting from the blood, sweat and tears of
Post a Comment
Read more
More posts