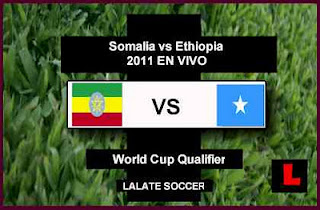 By James M. Dorsey
Success on the soccer pitch is a double-edged sword for war-torn and famine ravished Somalia’s national team.
Just playing to qualify for the 2014 World Cup in Brazil constitutes an act of defiance. It defies the ban on soccer by the Al Qaeda-linked Al Shabab, which controls significant chunks of the country, and it defies the odds of political instability, economic collapse, drought and famine.
Somalia drew 0:0 in its first qualifier this weekend against Ethiopia; a home game that had to be played in neighbouring Djibouti because the security situation in the country makes playing matches impossible. The national team’s problems get that much bigger on Wednesday if the team does what it aims to do: beat Ethiopia and advance in the qualification round that would pit the team against South Africa, Botswana and the Central African Republic.
To meet its challengers, the Somali Football Federation, starved of sponsorship let alone merchandising and ticket sales, will have to scrounge for money. It $250,000 subsidy from world soccer body FIFA is insufficient to cover the cost of an international competition.
The federation hopes that success against Ethiopia will open the door to additional FIFA and Confederation of African Football (CAF) funding and will inspire the vast Somali Diaspora to chip in. The federation launched a recruitment and fundraising campaign in the Diaspora in August after the Al Shabab suffered lost their control of a majority of the capital Mogadishu to forces of the Transition Federal Government backed by African Union peacekeepers.
Money is just one of the federation’s woes. Local media and family reported in early October that 19-year old national soccer team player Sa’ad Saleh Hussein had been detained by the Shabab in Afgoye, 30 kilometers south of the Somali capital Mogadishu.
The media quoted relatives of Mr. Hussein as saying that Shabab militants had told them that he had been “found guilty under Islam," but had given them no further details. At about the same time, the Somali federation’s president, Abdi Qani Said Arab, was lightly injured in a suicide bombing targeting applicants for Turkish scholarships in which nearly a hundred people were killed. Under-20 star Abdi Salaan Mohamed Ali was killed and two of his co-players wounded in February in a suicide bombing that left 11 people dead.
The Shabab have declared involvement in soccer, including the watching of matches on television, a crime punishable by death. The jihadists last month moved to also ensure a strict adherence to a five-year old ban on women's sports. The renewed emphasis on women amounts to an expanded enforcement of the Shabab's extreme interpretation of Quranic guidelines on sports that in recent years focused primarily on its efforts to ban soccer for men as well as women.
Initially an armed wing of the courts, the Shabab emerged as a force in their own right with the 2006 US-backed Ethiopian invasion that forced the courts out of power.
Much like they did with soccer officials, Al Shabab operatives have begun threatening women basketball players with death if they fail to give up the sport. The focus on basketball is no coincidence. Basketball is Somalia's second most popular sport after soccer and alongside soccer and handball only one of three sports played by women in Somalia.
James M. Dorsey is a senior fellow at the S. Rajaratnam School of International Studies at Nanyang Technological University in Singapore and the author of the blog, The Turbulent World of Middle East Soccer.
Somalia