Showing posts from July, 2011
Show all

Forgetting lessons of the Holocaust: European, Israeli and Jewish right-wing extremists court one another

Norway killer Anders Behring Breivik. (File Photo) in Share 2 By JAMES M. DORSEY AL ARABIYA Jews rather than Muslims would have been the focus of Anders Behring Breivik’s hatred had he lived seven decades ago. Mr. Breivik’s choices would have been easier than. The young Norwegian with the good Aryan looks would have probably joined Adolf Hitler’s SS, the elite units who played a key role in attempting to exterminate the Jews. In an ironic twist of history, the very people Mr. Breivik’s ideological ancestors sought to eradicate are the ones who in his and those that share his views stand on the front line of civilization’s battle against Islam’s creeping annexation of Europe. And in an equally ironic twist, some members of the very Israeli and Jewish groups Mr. Breivik and other representatives of Europe’s extreme right wing see as their potential allies believe there is virtue in an association with racist and often latently anti-Semitic groups who support Israel on
Post a Comment
Read more 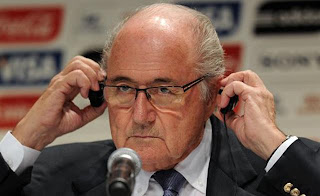 FIFA President Sepp Blatter adjusts his headphones during a press conference. (File photo) in Share 6 By JAMES M. DORSEY Al Arabiya FIFA President Sepp Blatter has hinted for the first time that the scandal involving bribery charges against Mohamed Bin Hammam could lead to an investigation of Qatar’s successful bid to host the 2022 World Cup. Speaking in Rio de Janeiro, Mr. Blatter said that he would initiate an investigation if his Solutions Committee, an advisory board that includes former Dutch star Johan Cruijff, former US Secretary of State Henry Kissinger and opera singer Placido Domingo recommended him to do so. The committee was established earlier this year to help Mr. Blatter resolve the worst corruption and bribery scandal in the world soccer body’s 107-year history. “Now, at this moment, we are not touching the Qatar World Cup. But we are going step by step into the matters we have to realize and if somewhere through this Solutions Committee they shoul
Post a Comment
Read more

Asian Football Confederation (AFC) President Mohamed Bin Hammam speaks during a news conference. (File Photo) in Share 5 By JAMES M. DORSEY AL ARABIYA KUALA LUMPUR The Asian Football Confederation (AFC), acting on advice of its legal committee, has delayed a decision on elections to replace its suspended president, Mohammed Bin Hammam, until May of next year. The AFC’s 19-member executive committee in a meeting in Kuala Lumpur on Friday was expected to call for elections after world soccer body FIFA last weekend banned the 62-year old Qatari national for life from involvement in soccer because of alleged bribery. Mr. Bin Hammam has repeatedly denied any wrongdoing and has vowed to fight the FIFA decision. Mr. Bin Hammam in a letter to AFC members earlier this week said he would not resign his post as head of the Asian football body as long as he was appealing FIFA’s decision and asked for the AFC’s patience and understanding. In a statement, acting AFC acting pre
Post a Comment
Read more

The TNC’s resorting to tribal politics in the immediate aftermath of General Younis’ death however suggests the challenge post-Qaddafi will face in trying to build institutions from scratch in a nation that has been ruled on the basis of tribes for the four decades (File Photo) in Share 0 By JAMES M. DORSEY AL ARABIYA The mysterious killing of the commander of Libyan rebel forces foreshadows the difficulties a post-Qaddafi Libya will encounter once it embarks on a transition toward democracy irrespective of who was responsible for the assassination. Libyan rebel leader Mustafa Abdul Jalil’s assertion that forces loyal to Libyan leader Col. Muammar Qaddafi were responsible for the killing of General Abdul Fatah Younis and two other commanders does little to address the issues raised by the incident. Perhaps most importantly, Mr. Jalil was denying by implication that the commander had been killed by rebel fighters. Countering reports that General Younis had been arrested
Post a Comment
Read more

US fence straddling fuels anti-Americanism in Syria and Bahrain

Bahrainis protest US support for Khalifa regime. (File Photo) in Share 5 By  JAMES M. DORSEY AL ARABIYA US reluctance to wholeheartedly call for the departure of autocratic leaders across the Middle East and North Africa is fuelling a revival of anti-American sentiment. Rising anger in countries like Bahrain, where significant US military and geo-political interests are at stake, and Syria, where the US is concerned about who might replace the incumbent regime, contrasts starkly with the absence of anti-American sentiment for much of the past seven months since the Arab revolt erupted in December 2010. The US was slow to endorse the demand for the departure earlier this year of one of its closest Arab allies, Egyptian President Hosni Mubarak. Nonetheless, this did not spark anger among anti-government protesters who noted the Obama administration’s endorsement a month earlier of Tunisian President Zine El Abedine Ben Ali. The US has also albeit ineffectually called for the remova
Post a Comment
Read more

A caricature depicting Libyan leader Muammar Gaddafi (C) with female bodyguards is displayed in a gallery at an exhibition titled "Gaddafi's Crimes Exhibition" at Old University in Benghazi. (File photo) in Share 4 By  JAMES M. DORSEY AL ARABIYA Figure this one out: Areas of Libya controlled by Col. Muammar Qaddafi could soon be in dire need of food and medical aid to cope with shortages and a broken healthcare system as a result of United Nations-imposed sanctions. That is if NATO and allied backed-rebels fail to either force Mr. Qaddafi from office or negotiate a deal that allows for a transfer of power. Qaddafi-controlled western Libya isn’t quite there yet, but is well on its way to becoming yet another part of the world struggling with a humanitarian crisis, according to the United Nations. The UN reported this week that a fact-finding mission it had sent to Qaddafi-controlled parts of Libya had found the region suffering from rising food prices, cash and fuel
Post a Comment
Read more
More posts