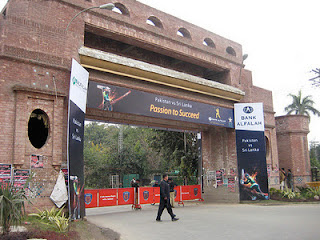 Lahore’s Muammar Gaddafi Stadium
By James M. Dorsey
With Afghan President Hamid Karzai agreeing in Istanbul with his Pakistani counterpart Asif Ali Zardari to jointly investigate the assassination of former Afghan president and peace envoy Burhanuddin Rabbani, soccer and cricket fans back home wonder what message Pakistani leaders are sending by failing to rename their country’s foremost sport stadium, the Moammar Gaddafi Stadium in Lahore.
“Why does this dictator get the name of our premier cricket (and soccer) ground? How can a murderer's name be associated with the game of cricket (or soccer). Pakistan must change the name of Gaddafi Stadium as soon as possible to show solidarity with the innocent people of Libya,” wrote an anonymous Pakistani blogger.
While the stadium also hosts soccer matches, it primarily serves as a cricket field. A second major soccer pitch is located on Lahore’s Gaddafi Street. Sport fans charge that Pakistan’s failure to demonstrate its empathy with the ousting of the Libyan leader by popularly supported rebels makes a mockery of Pakistani assertions that the country is working to combat militants and ensure regional peace and stability.
Mr. Karzai and Mr. Zardari agreed on the joint investigation on the eve of a regional conference in Istanbul on security and economic development in Afghanistan, which has endured a series of high-profile assaults in the capital Kabul in recent months.
Mr. Rabbani was assassinated on September 20 at his Kabul home by a suicide bomber posing as an emissary from the Taliban. Afghan officials have accused Pakistan and its ISI spy agency of supporting the militants who killed him, alleging that Taliban leaders based in the Pakistani city of Quetta were involved.
Mr. Karzai said that he and Mr. Zardari had “evolved a mechanism that I hope will give us the results” in the investigation of Mr. Rabbani’s murder.
Turkish President Abdullah Gul said the intelligence services of all three countries were discussing the Rabbani investigation. “We reached a common understanding and we will take further steps in the days to come,” Mr. Gul said.
Mr. Karzai cautioned that Afghanistan and Pakistan faced a host of threats and problems and would have to cooperate with honesty to ensure regional stability once international combat forces have withdrawn by the end of 2014 from his tortured country.
Fourteen regional nations, including Afghanistan, China, India, Iran, Kazakhstan, Kyrgyzstan, Pakistan, Russia, Saudi Arabia, Tajikistan, Turkey, Turkmenisan, Uzbekistan and the United Arab Emirates alongside European nations are participating in the Istanbul conference.
Afghanistan and the United States have demanded that Pakistan do more to curb militant activity and sanctuaries on its territory. Pakistan denies it shelters or supports the Haqqani network, a Taliban wing blamed for an attack on the U.S. Embassy in Kabul in September and other deadly operations.
Pakistani leaders bristle at US criticism that they have not done enough or that they play a double game, fighting militants in some areas and supporting them in others where they might be useful proxies in a future conflict with India, its archenemy.
Pakistani sport fans insist that Lahore’s continued honouring of Mr. Gaddafi undermines Pakistan’s claims. "Gaddafi Stadium is the home of the Pakistan Cricket Board and [was] the site of the final of the 1996 World Cup for a reason: it is simply the best that Pakistan cricket has to offer. So why is it named after a brutal Arab dictator?" said Pakistani columnist Farooq Tirmizi.
“Did we not feel embarrassed to invite the English team to play in a stadium named after the man responsible for the bombing over Lockerbie? We have tolerated this ridiculous name now for about 37 years. As we watch the scenes of horrific violence visited by the madman upon the Libyan people, let us at least do them the courtesy of removing their tormentor’s name from our biggest stadium,” Mr. Tirmizi added.
Lahore’s main 60,000-seat Lahore Stadium was renamed in 1974 at the Pakistani president Zia ul-Haq’s suggestion after Mr. Gaddafi defended Pakistan’s right to develop nuclear weapons. "Pakistan is the fort of Islam," Mr. Gaddafi told the Organization of Islamic Countries (OIC) at the time.
Soccer and cricket fans say the failure to rename the stadium is all the more embarrassing given that African nations which have more reason to feel indebted to Mr. Gaddafi because of his financial support have begun to rename infrastructure, including sport facilities and mosques that bear the Libyan leader’s name. Khartoum’s Burj Alfateh whose name commemorates Mr. Gaddafi’s 1969 coup was recently named the Corinthia Hotel.
“How can we claim that we support regional peace and security if we at the same time continue to honour one of the world’s most onerous dictators?” asked a Pakistani soccer fan.
James M. Dorsey is a Senior Fellow at the S. Rajaratnam School of International Studies (RSIS), Nanyang Technological University and the author of the blog, The Turbulent World of Middle East Soccer
Afghanistan Pakistan