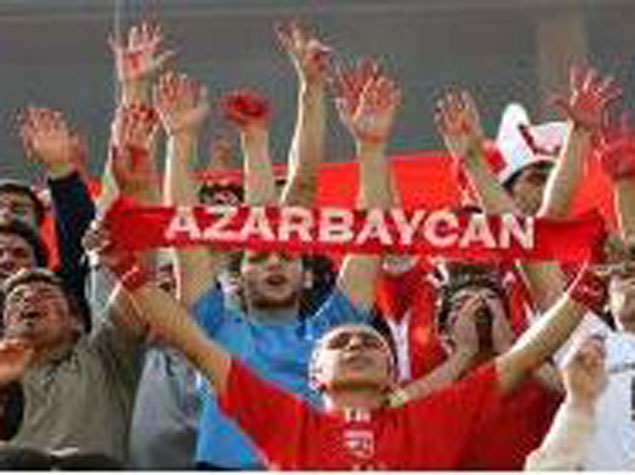 Nationalist fans demand unification with post-Soviet Azerbaijan
By James M. Dorsey
Nationalist and environmental soccer protests in recent months in the Bagh Shomal and Yadegar-e-Emam stadiums in Tabriz, the capital of the Iranian province of Eastern Azerbaijan, have raised the spectre of ethnic strife in the Islamic republic and a Turkish-Syrian-Iranian war using ethnic proxies.
The sporadic protests come as regional tension is mounting over the crisis in Syria as a result of President Bashar al-Assad’s eight month-old brutal crackdown on anti-government protesters.
With increasing pressure on Turkey to intervene in Syria, Turkish Foreign Minister Ahmet Davutuoglu on Tuesday appeared for the first time to leave the door open for possible Turkish military intervention, Mr. Davutuoglu warned at a news conference that Turkey was "ready for all possible scenarios" but had as yet not considered military intervention and didn’t want to.
Mr. Davutuoglu appeared in statements at his news conference and interviews with Turkish media to be deliberately creating confusion about Turkish intentions. The foreign minister told private Turkish television channel Kanal 24 that Turkey may create a military buffer zone inside Syria should tens of thousands of Syrian seek refuge in Turkey. At his news conference, Mr. Davutuoglu said that a buffer zone was "not on the agenda."
The prospect of greater Turkish involvement in the Syrian crisis coupled with Turkey’s decision this weekend to impose economic sanctions on Syria alongside the Arab League raises the spectre of a tit-for-tat proxy war that would involve not only Syria and Turkey but also Syria’s main backer, Iran. Turkish officials are concerned that Syria and Iran, both of which have effectively halted their security cooperation with Turkey, will step up support for Turkish Kurdish guerrillas of the Kurdish Workers Party (PKK) that in recent months has increased its attacks on Turkish targets.
Fears of a war using proxies are fuelled by Turkey’s tacit support for the Free Syrian Army (FSA) formed by Syrian military defectors who have been seeking to protect Syrian protesters and have attacked Syrian military targets. Some 1,500 of the 8,000 Syrian refugees in eastern Turkey are members of the FSA. Turkey has denied supporting the defectors but has facilitated media interviews with FSA commanders whose troops have their own camp on the Turkish side of the border.
The soccer protests in Tabriz signalling a rise in Azeri nationalist sentiment suggest that in an escalating war by ethnic proxies Turkey could support secessionist sentiments among its Turkic brethren in predominantly Azeri Eastern Azerbaijan that borders on the former Soviet Turkic republic of Azerbaijan, a close Turkish ally.
In the latest soccer incident in Tabriz, fans of Tabriz soccer club Traktor Sazi FC, a flashpoint of Iranian Azerbaijan’s identity politics that is owned by state-run Iran Tractor Manufacturing Co. (ITMCO), wore shirts with the Turkish and Azerbaijan flags and raised the Azerbaijani flag during last week’s league match against Fajr-e Sepasi of Shiraz, according to Iranian Azeri nationalists and various Iranian blogs.
The “Iranian regime will … charge them with separatism and even arrest them. The main (Iranian concern) is that the idea of Turkism is strengthening in South Azerbaijan,” News.Az quoted Saftar Rahimli, a member of the board of the World Azerbaijani’s Congress, as saying. Mr. Rahimli was referring to Eastern Azerbaijan by its nationalist Azeri name.
A conservative, pro-Iranian website, Raja News, confirmed the incident, charging that the soccer fans had employed “separatist symbols” and shouted separatist slogans during the match, according to The Meir Amit Intelligence and Terrorism Information Center. Raja News accused the fans of promoting “pan-Turkish” and “deviant objectives”. It urged authorities to ban nationalists fans from entering soccer stadiums.
The protests during the match against the Shirazi club follow similar protests in September and October sparked by a refusal by the Iranian parliament to fund efforts to save the environmentally endangered Lake Orumiyeh as well as anti-government protests in Tehran Azadi Stadium during last month’s 2014 World Cup qualifier against Bahrain and at a ceremony in May after the death of Nasser Hejazi, an internationally acclaimed Iranian defender and outspoken critic of President Mahmoud Ahmadinejad.
Last week’s protests in Tabriz were the sixth time this year that anti-government sentiment spilled onto the soccer pitch, one of the few places that strength of numbers and moments of intense passion encourage expressions of dissent. The Azeri protests are fuelled by an Azeri sense of being discriminated against.
A decision by security forces in early October to bar fans entry into the stadium during a match against Tehran’s Esteghlal sent thousands into the streets of Tabriz shouting “Azerbaijan is united" and ““Long live united Azerbaijan with its capital in Tabriz.” Scores were injured as security forces tried to break up the protest. Cars honking their horns choked traffic.
“Wherever Tractor goes, fans of the opposing club chant insulting slogans. They imitate the sound of donkeys, because Azerbaijanis are historically derided as stupid and stubborn. I remember incidents going back to the time that I was a teenager,” said a long-standing observer of Iranian soccer.
Iranian soccer pitches are battlefields for Mr. Ahmadinejad, a soccer fan who sees the game as a way to polish his tarnished image, and fans who view it as a venue to express dissent.
A 2009 cable from the US embassy in Tehran disclosed by Wikileaks describes how Mr. Ahmadinejad has sought with limited success to associate himself with Iran’s national team in a bid to curry popular favor.
The Football Federation of the Islamic Republic of Iran (FFIRI) postponed in February league matches in Tehran in a bid to prevent celebrations of the 32nd anniversary of the Islamic revolution from turning into anti-government protests inspired by the anti-government protests in Tunisia and Egypt that toppled presidents Zine el Abedine Ben Ali and Hosni Mubarak.
James M. Dorsey is a senior fellow at the S. Rajaratnam School of International Studies at Nanyang Technological University in Singapore and the author of the blog, The Turbulent World of Middle East Soccer.
Iran Syria Tractor Sazi Turkey