Showing posts from February, 2019
Show all 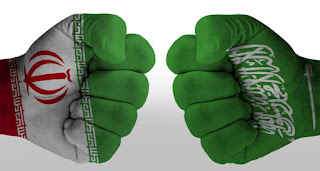 By James M. Dorsey A podcast version of this story is available on Soundcloud, Itunes , Spotify , Stitcher , TuneIn and Tumblr Saudi plans to become a major gas exporter within a decade raise questions about what the real goal of the kingdom’s policy, and by extension that of the United States, is towards Iran. Officially both Saudi Arabia and the US, which last year withdrew from the 2015 international accord that curbs the Islamic republic’s nuclear program and imposed harsh economic sanctions, are demanding a change of Iran’s regional and defense policies rather than of its regime. Yet, statements in recent years by some Saudi leaders and US officials as well a string of declarations at the recent US-sponsored Ministerial to Promote a Future of Peace and Stability in the Middle East in Warsaw by officials of the Trump administration as well as Saudi Arabia, Israel, the United Arab Emirates and Bahrain suggested that regime change was on their radar. Pre
Post a Comment
Read more

JMD on SSRN: A China Wins Twice Proposition: The Belt and Road Initiative

February 26, 2019
A China Wins Twice Proposition: The Belt and Road Initiative By James M. Dorsey A podcast version of this story is available on Soundcloud, Itunes , Spotify , Stitcher , TuneIn and Tumblr China’s dazzling infrastructure and energy-driven Belt and Road Initiative (BRI), a US$1 trillion investment across Eurasia and beyond, has lost its shine. Increasingly, China’s leveraging of the initiative is being perceived by a growing number of recipients and critics alike as a geopolitical power play, a tool to shape a new world order partly populated by autocrats and authoritarians, and progressively characterized by intrusive surveillance, potential debt traps, and perceived as a self-serving way to address domestic overcapacity. [1] As a result, China’s most immediate problem is a growing perception that its principle of win-win economic cooperation often amounts to little more than China wins twice, both economically and geopolitically. It is forcing China to focus in th
Post a Comment
Read more
More posts