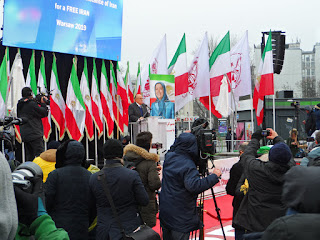 This week’s suicide attack on Revolutionary Guards in Iran’s south-eastern province of Sistan and Baluchistan, the second in two months, could not have come at a more awkward moment for Pakistani prime minister Imran Khan.

The assault on a bus carrying the guards back from patrols on the province’s border with the troubled Pakistani region of Balochistan killed 27 people and wounded 13 others. It occurred days before Saudi crown prince Mohammed bin Salman was scheduled to visit Pakistan as part of a tour of Asian countries.

While Baluchistan is set to figure prominently in Prince Mohammed’s talks with Mr. Khan, the attack also coincided with a US-sponsored conference in Warsaw, widely seen as an effort by the Trump administration to further isolate Iran economically and diplomatically.

Inside the conference, dubbed The Ministerial to Promote a Future of Peace and Security in the Middle East, Secretary of State Mike Pompeo insisted that US policy was designed to force Iran to alter its regional and defense policies and not geared towards regime change in Tehran.

Yet, US President Donald J. Trump appeared to be sending mixed messages to the Iranians as well as sceptical European governments with his personal lawyer, Rudolph Giuliani, addressing a rally outside the conference organized by the Mujahedeen-e-Khalq, a controversial Iranian exile group believed to enjoy Saudi backing.

Mr. Giuliani told the protesters who waved Iranian flags and giant yellow balloons emblazoned with the words, “Regime Change” that “we want to see a regime change in Iran.”

Mr. Trump appeared to fuel suspicion that Mr. Giuliani represented his true sentiment by tweeting on the eve of the Warsaw conference in a reference to the 40th anniversary of the Islamic revolution: “40 years of corruption. 40 years of repression. 40 years of terror. The regime in Iran has produced only #40YearsofFailure. The long-suffering Iranian people deserve a much brighter future.”

In a statement, the Revolutionary Guards blamed the attack on "mercenaries of intelligence agencies of world arrogance and domination," a reference to Saudi Arabia, the United States and Israel.
Jaish-al-Adl (the Army of Justice), a Pakistan-based splinter group that traces its roots to Saudi-backed anti-Shiite groups with a history of attacks on Iranian and Shiite targets, has claimed responsibility for the attack.

The group says it is not seeking Baloch secession from Iran. Instead, it wants to "force the regime of the guardianship of jurisconsult (Iran) to respect the demands of the Muslim Baloch and Sunni society alongside the other compatriots of our country."

Militants targeted a Revolutionary Guards headquarters in December in a rare suicide bombing in Chabahar, home to Iran’s Indian-backed port on the Arabian Sea, a mere 70 kilometres from the Chinese supported port of Gwadar, a crown jewel in the Pakistani leg of the People’s Republic’s Belt and Road initiative.

The attacks coupled with indications that Saudi Arabia and the United States may be contemplating covert action against Iran using Pakistani Balochistan as a launching pad, and heightened Saudi economic and commercial interest in the province, frame Prince Mohammed’s upcoming talks in Islamabad.

During his visit, Prince Mohammed is expected to sign a memorandum of understanding on a framework for US$10 billion in Saudi investments.

The memorandum includes a plan by Saudi national oil company Aramco to build a refinery in Gwadar as well as Saudi investment in Baluchistan’s Reko Diq copper and gold mine.

The investments would further enhance Saudi influence in Pakistan as well as the kingdom’s foothold in Balochistan.

They would come on the back of significant Saudi aid to help Pakistan evade a financial crisis that included a US$3 billion deposit in Pakistan’s central bank to support the country’s balance of payments and another US$3 billion in deferred payments for oil imports.

Taken together, the refinery, a strategic oil reserve in Gwadar and the mine would also help Saudi Arabia in potential efforts to prevent Chabahar from emerging as a powerful Arabian Sea hub.
Saudi funds have been flowing for some time into the coffers of ultra-conservative anti-Shiite, anti-Iranian Sunni Muslim madrassahs or religious seminars in Balochistan. It remains unclear whether they originate with the Saudi government or Saudi nationals of Baloch descent and members of the two million-strong Pakistani Diaspora in the kingdom.

The funds help put in place potential building blocks for possible covert action should the kingdom and/or the United States decide to act on proposals to support irredentist activity.

The flow started at about the time that the Riyadh-based  International Institute for Iranian Studies, formerly known as the Arabian Gulf Centre for Iranian Studies, an allegedly Saudi government-backed think tank, published  a study that argued that Chabahar posed “a direct threat to the Arab Gulf states” that called for “immediate counter measures.”

If executed, covert action could jeopardize Indian hopes to use Chabahar to bypass Pakistan, significantly enhance its trade with Afghanistan and Central Asian nations and create an anti-dote to Gwadar.

Pakistani analysts expect an estimated US$ 5 billion in Afghan trade to flow through Chabahar after India in December started handling the port’s operations.

Iranian concerns that the attacks represent a US and/or Saudi covert effort are grounded not only in more recent US and Saudi policies, including Mr. Trump’s withdrawal last year from the 2015 international agreement to curb Iran's nuclear program despite confirmation of its adherence to the accord and re-imposition of harsh economic sanctions against the Islamic republic.

They are also rooted in US and Saudi backing of Iraq in the 1980s Gulf war, US overtures in the last year to Iranian Kurdish insurgents, the long-standing broad spectrum of support of former and serving US officials for the Mujahedeen-e-Khalq and in recent years of Prince Turki al-Faisal, a former head of Saudi intelligence and ex-ambassador to the United States and Britain.

Said Ali Vaez, the International Crisis Group’s Iran analyst: “The concern was never that the Trump admin would avert its eyes from Iran, but rather that is in inflicted by an unhealthy obsession with it. In hyping the threat emanating from Iran, Trump is more likely than not to mishandle it and thus further destabilize the Middle East.”