Talking to Rouhani: Is Trump shooting from the hip or following a script? 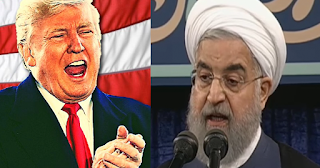 Message to Abu Dhabi, Riyadh and Tel Aviv: Not to worry, US President Donald J. Trump has no intention of meeting his Iranian counterpart, Hassan Rouhani, unconditionally.

On the contrary, Mr. Trump’s surprise announcement that he is willing to talk to Mr. Rouhani is likely part of a plan formulated almost a year before he returned to government service by his national security advisor John R. Bolton.

The announcement took many by surprise and threatened to reinforce the impression, even among America’s closest friends in the Middle East, that Mr. Trump was a supportive but unpredictable and unreliable ally.

His offer to talk to Mr. Rouhani appeared to put in doubt his withdrawal in May from the 2015 international agreement that curbed Iran’s nuclear programme and re-imposition of harsh economic sanctions aimed at destabilizing, if not toppling Iran’s government.
Mr. Bolton’s plan suggests otherwise.

He published his plan, drafted at the request of Mr. Trump’s then strategic advisor, Steve Bannon, in August of last year after he had lost hope of presenting it to the president in person.

The plan meticulously lays out the arguments Mr. Trump employed to justify the withdrawal from the nuclear agreement and steps the United States should take to garner international support for the sanctions regime.

“Iran is not likely to seek further negotiations once the JCPOA is abrogated, but the Administration may wish to consider rhetorically leaving that possibility open in order to demonstrate Iran’s actual underlying intention to develop deliverable nuclear weapons, an intention that has never flagged,” the plan said. JCPOA is the acronym for the nuclear accord’s official designation, the Joint Comprehensive Plan of Action.

Mr. Trump’s surprise announcement hardly proves the allegation that Iran intends to develop a military nuclear capability, but it does constitute an attempt to gain the moral high ground and weaken European, Russian and Chinese support for the agreement by demonstrating that Iran is recalcitrant and unwilling to come to the table.

The president’s offer puts Iran in a bind. Refusal to talk serves Mr. Trump’s purpose. An agreement to engage would have increased domestic hardline pressure on the Iranian president and involved him in discussions that given US policy had little chance of success.

US Secretary of State Mike Pompeo and Rouhani advisor Hamid Aboutalebi said as much in separate statements in the wake of Mr. Trump’s offer.

“If the Iranians demonstrate a commitment to make fundamental changes in how they treat their own people, reduce their malign behaviour, can agree that it’s worthwhile to enter in a nuclear agreement that actually prevents proliferation, then the president said he’s prepared to sit down and have a conversation with him,” Mr. Pompeo clarified.

Mr. Aboutalebi suggested that Mr. Rouhani would be willing to meet Mr. Trump if he demonstrated “respect for the great nation of Iran,” returned to the nuclear deal, and reduced his hostility towards the Islamic republic.

Mr Aboutalebi was probably referring not only to Mr. Trump’s long-standing anti-Iranian bluster as well as his withdrawal from the agreement and re-imposition of sanctions, but also to Mr. Bolton’s plan that appears to embody the guidelines of the president’s policy.

“With Israel and selected others, we will discuss military options. With others in the Gulf region, we can also discuss means to address their concerns from Iran’s menacing behaviour,” the plan suggests.

Few believe that either the United States or Iran wants a direct military confrontation.

Mr. Bolton as well as other associates of Mr. Trump have however been unequivocal in their calls for regime change in Tehran and their support for demands for the violent overthrow of the Iranian government by an Iranian exile group that is well-connected with Western governments and political elites but has little apparent support in Iran.

So has Saudi Prince Turki al-Faisal, the former head of the kingdom’s intelligence service and past ambassador to Britain and the United States, who is believed to often echo views that Crown Prince Mohammed bin Salman prefers not to voice himself.

Mr. Bolton’s plan contains building blocks for attempts to destabilize Iran not only by squeezing it economically but also by spurring insurgencies among the country’s ethnic minorities.

The plan envisions official US support “for the democratic Iranian opposition,” “Kurdish national aspirations in Iran, Iraq and Syria,” and assistance for Baloch in the Pakistani province of Balochistan and Iran’s neighbouring Sistan and Balochistan province as well as Iranian Arabs in the oil-rich Iranian province of Khuzestan. It also suggests expedited delivery of bunker-buster bombs to US allies.

Mustafa Hijri, head of the Kurdistan Democratic Party of Iran (KDPI), met last month during a visit to Washington at the invitation of the Trump administration with Steven Fagin, the then head of the State Department’s Office of Iranian Affairs, who has since been appointed counsel general in Erbil in Iraqi Kurdistan.

A Saudi think tank, believed to be backed by Prince Mohammed, called last year in a study for Saudi support for a low-level Baloch insurgency in Iran.

Pakistani militants have claimed that Saudi Arabia has stepped up funding of militant madrassas or religious seminaries in Balochistan that allegedly serve as havens for anti-Iranian fighters.

Said Iran scholar Ahmad Majidyar: “Iran’s south-eastern and north-western regions – home to marginalized ethnic and religious minorities – have seen an uptick in violence by separatist and militant groups… Sistan and Baluchestan can be a breeding ground for local militant and separatist movements as well regional and international terrorist groups.”