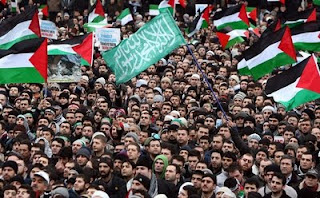 Turks protest Israeli policies in Gaza (Source: TPMcafe.com)
By James M. Dorsey
Turkish sports authorities and Istanbul club Besiktas JK have called on soccer fans to be restrained during Thursday’s emotionally charged Europa League match against Maccabi Tel Aviv in Turkey’s commercial capital.
The match is being played as Turkey takes the lead in Middle Eastern and Muslim efforts to support next week’s expected Palestinian bid to win United Nations Security Council recognition of Palestinian statehood.
It is also being played against the backdrop of a visit by Turkish Prime Minister Recep Tayyip Erdogan to the three North African states – Egypt, Tunisia and Libya – where popular revolts this year have succeeded in ousting longstanding autocratic leaders. The visit comes days after militant soccer fans attacked the Israeli embassy in Cairo, forcing Israeli diplomatic staff to be evacuated.
Mr. Erdogan is receiving a hero’s welcome for his forcing Arab states to take a firmer stand in support of the Palestinian bid and against an expected United States veto against recognition of Palestinian statehood. Mr. Erdogan did so by setting an example earlier this month by expelling the Israeli ambassador to Turkey, downgrading diplomatic relations with the Jewish state and suspending all military cooperation with Israel. Mr. Erdogan’s moves enjoy widespread popular support in Turkey and across the Arab world.
Mr. Erdogan’s tough stand against Israel came in response to Israel’s refusal to apologize for the death of eight Turks and a Turkish-American in a raid on a aid ship seeking last year to run the Israeli blockade of Gaza. Turkey was until then Israel’s closest friend in the Muslim world. Israel has expressed regret for the deaths but refuses to apologize, saying its troops acted in self-defence.
As a result, Thursday’s match between Besiktas and Maccabi Tel Aviv takes on special significance despite a call by the Istanbul Provincial Sports Security Committee to view the encounter as “nothing more than a football game.”
The call came after a security meeting in Istanbul to discuss measures in advance of the match. “We hope the match will be played within the bounds of fair play. What I ask from our fans is that they see this game as nothing more than a sports event and support the team with that in mind,” Besiktas board member Orhan ,” Saka told the semi-official Anatolia news agency after the meeting. Mr. Saka cautioned fans that Besiktas could be penalized for unruly behaviour of its supporters.
In a statement on Besiktas’ website, Portuguese coach Carlos Carvalhal said that “as for the tension between Turkey and Israel, we are professionals and we want to do nothing but play football. We are not interested in politics.”
In an open letter to its supporters, Besiktas said that “in light of recent political developments, the eyes of (European soccer body) UEFA and the international football community will be strongly focused on this event…We see it as a good opportunity to show the world Besiktas JK's traditional hospitality and sportsmanship sprit, which we are known for. We must also not engage in any activity that will send the wrong message."
The letter went on to say that "negative comments circulating in the social media such as enticing you on to the pitch before and during game are being closely monitored by the Istanbul Police Department as it has fully committed to not turn this match into anything other than a simple football event…Remember, politics and sports are two separate entities that should not be mixed.”
The match is likely to be a barometer of Turkish public sentiment which is critical of Israel’s blockade of the Gaza Strip and its policies towards the Palestinians and angry about the attack on the aid ship.
Turkish Sports Minister Suat Kilic has assured Maccabi that its safety would be ensured, according to Turkish daily Hurriyet. The paper quoted the minister as saying that the team would enjoy the "highest level of (Turkish) hospitality" and that Israeli players will return home "safely".
Maccabi arrived in Istanbul on Wednesday to be greeted by a heavy police presence. Players have reportedly been told they will not be allowed to leave the team hotel other than to go to training and the match itself.
Maccabi coach Motti Ivanir told The Jerusalem Post that we are not interested in politics. We are here to play soccer. We have been here before and we are expecting everything to be the same. We are not scared of anyone and we are not concerned anything will happen to us."
James M. Dorsey is a senior fellow at Nanyang Technological University's S. Rajaratnam School of International Studies in Singapore and the author of the blog, The Turbulent World of Middle East Soccer.
Football Israel Palestinians Soccer Turkey