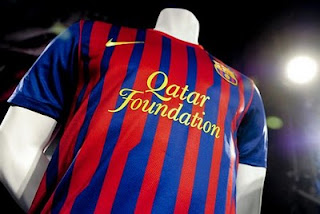 By James M. Dorsey
European champions FC Barcelona Saturday approved a controversial $225 million shirt sponsorship deal with Qatar Foundation, the first such a deal in the club’s illustrious history and the largest in soccer history.
Barcelona’s general assembly voted overwhelmingly in favour of the deal rejecting a petition by thousands of fans and despite its denunciation by the club’s former legendary coach Johan Cruijff who described the 5.5-year deal as “vulgar.”
The club signed the five-and-a-half year deal, touted as the largest shirt sponsorship deal in football history, in December but the decision to collect money for the first time in its history to display a logo on its jerseys did not go down well.
In a statement on its website, Barcelona said the assembly endorsed the deal with 697 votes against 76 and 36 abstentions.
The Qatar Foundation, founded in 1995, funds education, scientific research and community development projects primarily in the Middle East. The non-profit organization is headed by the wife of Qatari emir Sheikh Hamad bin Khalifa al-Thani.
Opponents of the shirt deal accused Qatar of being an autocratic state that has no opposition groups and has repeatedly postponed parliamentary elections.
Countering critics Barcelona coach Pep Guardiola, who played for Qatar's Al Ahly from 2003 to 2005  expressed support for the deal, describing Qatar as "the most open Muslim country".
"Qatar is opening up to the Western world and I know the efforts that the foundation is putting in to do some really good things. I think that we often don?t understand the Muslim world - nor they us," Mr. Guardiola said on Barcelona’s website.
The deal comes as Barcelona is struggling financially. Barcelona posted a $107 million loss last season and has debts of $596 million.
Barcelona vice president Javier Faus told members that the club's board felt it had no choice but to accept the shirt sponsorship because "it has a substantial economic impact".
Mr. Faus noted however that the deal could be cancelled when the current board's mandate ends in three years’ time.  "We wanted to solve financial questions but didn’t want the agreement to be irreversible," he said.
James M. Dorsey is a senior fellow at Nanyang Technological University's S. Rajaratnam School of International Studies in Singapore and the author of the blog, The Turbulent World of Middle East Soccer.
FC Barcelona Qatar