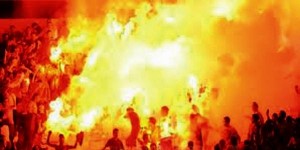 Fireworks during Esperance’s match against Mouloudia Alger (Source: Tunisia-live.net)
By James M. Dorsey
Two weeks of soccer violence in Egypt and Tunisia overshadow Friday’s African Championship League encounter in Cairo between six-time African champion Al Ahly SC and Esperance Sportive de Tunis.
Al Ahly chairman Hassan Hamdy, in a bid to preempt renewed confrontations, met this week with representatives of Ultras Ahlawy, the club’s militant, highly politicized, violence-prone fans, who last week clashed with security forces in Cairo stadium and last weekend played a key role in the storming of the Israeli embassy in the Egyptian capital.
Concern that violence could erupt during Al Ahly’s match against Esperance was fueled by incidents on Monday in Tunis in a game between Club Africain and Ivory Coast champions ASEC Mimosas. Mimosas said in a complaint to the Confederation of African Football (CAF) that Club Africain supporters had hurled smoke bombs and fireworks onto the pitch. It said the game had to be interrupted in the first half for 30 minutes because of clashes with security forces who used tear gas. Violence also disrupted a match between Esperance and Algeria’s Mouloudia Alger.
Militant soccer fans in Egypt and Tunisia played a key role in mass anti-government protests early this year that toppled Presidents Hosni Mubarak and Zine El Abedine Ben Ali. The fans have since expressed frustration and protested against the slow transition in their countries towards democratic elections.
Mr. Hassan held out a carrot for the militants by promising that he would try and get eight militants released who are still being held by police after last week’s clash in Cairo stadium.
The authorities released seven ultras earlier this week. Court proceedings against the militants are expected to start on Monday.
In an interview with the BBC, Esperance’s Cameroonian forward Yannick N'Djeng appealed for calm ahead of Friday's key match, which will determine which of the two teams will advance to the semi-finals.
"I want this match to be fair play - football is not fighting," Mr. N’Djeng said.
Al Ahly (Egypt) Egypt Esperance Football Mouloudia Akger Soccer Tunisia