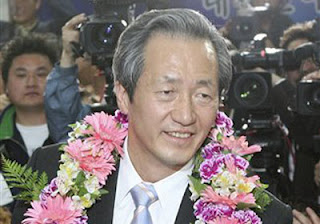 Chung Mong-Joon (Source: AP Photo)
By James M. Dorsey
Former South Korean vice president of world soccer body FIFA Chung Mong-joon, in a boost of disgraced Asian Football Confederation (AFC) head Mohammed Bin Hammam, has accused FIFA president Sepp Blatter of employing the methods of a dictator to avoid being held accountable.
In a book published on Tuesday in South Korea, Mr. Chung, who was defeated last December in his bid for re-election by Jordanian prince Ali Bin Al Hussein, who was widely viewed to have enjoyed Mr. Blatter’s support and was opposed by Mr. Bin Hammam, described the FIFA president as “an articulate and intelligent man, but more like an impetuous child than a gentleman", according to The New York Times.
“The executive committee is meant to provide checks and balances when its president goes beyond his authority and mandate. Blatter is trying to take away the power of the executive committee and thereby neutralize any efforts to check his power. A lot of dictators on this planet have used similar methods,” Mr. Chung, a billionaire shipbuilding magnate, scion of the Hyundai family and member of the South Korean National Assembly who headed South Korea's failed 2022 World Cup that was awarded to Qatar, said. Mr. Chung, who is considering running for president of South Korea, was believed before his electoral defeat to have wanted to challenge Mr. Blatter as president in FIFA elections in June.
Mr. Blatter won the election unchallenged after Mr. Bin Hammam, the only other contender, withdrew his candidacy because of charges that he had bribed officials of the Caribbean Football Union (CFU) to secure their support for his bid. The FIFA ethics committee in July banned Mr. Bin Hammam for life from involvement in soccer. Mr. Bin Hammam, who has denied any wrong doing, has appealed the verdict and charged that the allegations were fabricated to prevent him from standing against Mr. Blatter.
Mr. Blatter has vowed to root out corruption in FIFA, which is confronting its worst scandal in its 107-year history. Several FIFA executive committee members have been penalized for improper behaviour or corruption and vice president Jack Warner, who headed soccer in North and Central America and the Caribbean resigned, to avoid investigation. Mr. Warner charged that Warner that the ethics panel was a court of hypocrites who had been bribed by gifts that were part and parcel of the FIFA culture.
Mr. Blatter has promised to unveil in October steps to stamp out corruption and make FIFA more accountable and transparent. In a unilateral move, he appointed former US Secretary of State Henry A. Kissinger, Spanish opera singer Plácido Domingo and retired Dutch soccer star Johan Cruyff to advise him on ways to repair FIFA’s tarnished image.
Ironically, Mr. Kissinger reportedly said that “the politics of FIFA, they make me nostalgic for the Middle East” after he led a failed US bid to host the 1986 World Cup. The U.S. bid was undermined by a deal for television rights that then FIFA president Joao Havelange secretary general Blatter had  promised to Mexico, which defeated the US bid.
Mr. Chung won Mr. Blatter’s animosity by repeatedly demanding that Mr. Blatter’s salary be made public and challenging him his management.
In his book, Mr. Chung notes that a New York court ruling in a case in which FIFA was accused of breaking a contract with MasterCard in favour of Visa, its credit card rival, that was “full of contempt for FIFA. The presiding judge mentioned the word ‘lie’ 13 times in reference to FIFA.”
FIFA settled its dispute MasterCard by paying it $90 million. “Blatter shifted all the responsibility to (FIFA secretary general) Jérôme Valcke, then marketing director. Six months later, he not only reinstated Valcke, but also promoted him to general secretary. This only reinforced the suspicion that Blatter himself and Valcke were behind the whole thing,” Mr. Chung asserts
James M. Dorsey is a senior fellow at Nanyang Technological University's S. Rajaratnam School of International Studies in Singapore and the author of the blog, The Turbulent World of Middle East Soccer.
Bin Hammam Blatter FIFA Football Soccer