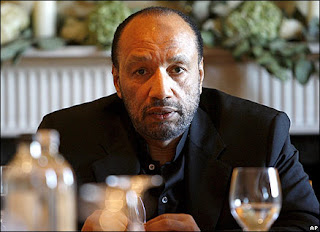 Mohammed Bin Hammam (Source: AP)
By James M. Dorsey
Disgraced former world soccer body FIFA vice president and suspended Asian Football Confederation head Mohammed Bin Hammam has launched a scathing attack on the deputy chairman of FIFA’s ethics committee, which in July banned him for life from involvement in soccer, as well as on the body’s secretary general.
In a letter to Petrus Damaseb, the deputy ethics committee chair, published on Mr. Bin Hammam’s website, the ousted official charged that he and Caribbean Football Union (CFU) executives he stands accused of having bribed had been targeted for racial reasons. "Were I a European, or were the Caribbean part of Europe, neither Blatter nor (FIFA secretary general Jerome) Valcke will dare lay a finger on us; were we Europeans, you would have never been given the opportunity to chair this Ethics Committee panel and slaughter people left and right, as you have done."
Mr. Bin Hammam was banned by the ethics committee after a investigation concluded that he had bribed CFU executives to secure their votes for his failed bid for the FIFA presidency. Mr. Bin Hammam, a 62-year old Qatari national, withdrew his candidacy in late May hours before he was suspended by the ethics committee pending the outcome of its investigation. His withdrawal paved the way for the unchallenged re-election in June of FIFA president Sepp Blatter for a fourth term. Mr. Blatter has vowed to use his term to stamp out corruption in FIFA, which is confronting its worst scandal since its founding 107 years ago.
Mr. Bin Hammam charged in his letter dated September 4 that Mr. Blatter was using Mr. Damaseb "as his pawn in his battle for revenge", with Mr. Valcke pulling the strings. He expressed confidence in his letter that he would emerge from his appeal of the ethics committee’s decision "unscathed of these creative [bribery] allegations designed by Valcke and Blatter, and supported by you, to damage my reputation".
Mr. Bin Hammam has consistently denied any wrongdoing. "I am capable enough financially and otherwise to defend myself for years if it is necessary," he wrote.
Mr. Bin Hammam charged that “nobody in this world will believe that Valcke and Blatter are qualified to fight any sort of corruption. If they are serious about fighting corruption, they should have the courage to volunteer themselves as first subjects of such investigations on the allegations raised against them since years.” Mr. Bin Hammam was referring to allegations that Mr. Blatter had bought votes during the 2002 FIFA presidential election to fend off a challenge from Confederation of African Football (CAF) chief Issa Hayatou.
He recalls that Mr. Damaseb supported Mr. Blatter at the time. "What will be your position if his opponent had won the election, and started a similar witch-hunt questioning and pressurising you with threat of sanctions if you do not admit that you were bribed for voting Blatter? If your conscience is on vacation, it is time to recall it because enough is really enough!! You should stop Valcke–Blatter damaging people’s reputation and lives. Those people have children and families. Just think what kind of crime you are committing. "Please stand for the virtues of your profession and for what this noble profession embraces: fairness and justice, not oppression," Mr. Bin Hammam said.
Mr. Bin Hammam’s letter seems to alternate between bluster and pleas to Mr. Damaseb. "Please do not let Blatter use you as his pawn in his battle for revenge. Blatter is immune and is so used to betrayal, conspiracy and wrongdoings but you are not. Have you read Valcke’s threatening letter to the Caribbean Football Union member associations two days after my conviction? [July 25] He clearly indicated to them, either they admit that they had received bribe from Bin Hammam, or they will be punished. He goes on to say that if they admit that they received the bribe, the Ethics Committee will forgive them,” Mr. Bin Hammam said.
"Did you or the Ethics Committee decide that? Or is this just another example of him pulling the strings and then later, dictating to you? How have you convicted me first and then now you are asking them to determining whether they have been bribed or not?” he went on to say.
James M. Dorsey is a senior fellow at Nanyang Technological University's S. Rajaratnam School of International Studies in Singapore and the author of the blog, The Turbulent World of Middle East Soccer.
AFC Bin Hammam Blatter CAF FIFA