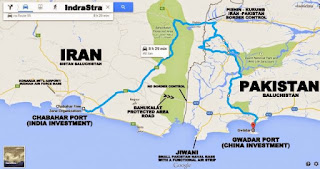 Iran’s Indian-back port of Chabahar, inaugurated months before the United States re-imposed sanctions on the Islamic republic, is where Asia and the Middle East’s multiple political conflicts and commercial rivalries collide.

Chabahar was destined to become a player in geopolitical and economic manoeuvring between China, India, Pakistan, Afghanistan, Saudi Arabia, the United Arab Emirates and Central Asian states even without the re-imposition of sanctions.

The sanctions have, however, significantly enhanced its importance as Iran struggles to offset the likely punishing impact of US efforts to force the Islamic republic to alter its foreign and defense policy and/or achieve a change of regime.

Iran sees the port together with the Indian-backed Chabahar Free Trade Zone, that hopes to host a steel mill and a petrochemical complex, as the motor of development of the Iranian section of the Makran coast. Iran’s province of Sistan and Balochistan shares the coast line with the Pakistani province of Balochistan, home to the Chinese-backed rival port of Gwadar.

Saudi Arabia sees the Pakistani region as a launching pad of a potential effort by the kingdom and/or the United States to destabilizing the Islamic republic by stirring unrest among its ethnic minorities, including the Baluch. Saudi Arabia has put the building blocks in place for possible covert action but has to date given no indication that it intends to act on proposals to support irredentist action.

A study written by Mohammed Hassan Husseinbor, an Iranian of Baloch origin, and published by the International Institute for Iranian Studies, formerly known as the Arabian Gulf Centre for Iranian Studies, a Saudi government-backed think tank, argued that Chabahar posed “a direct threat to the Arab Gulf states” that called for “immediate counter measures.”

Mr. Husseinbor said Chabahar would enable Iran to increase market share in India for its oil exports at the expense of Saudi Arabia, raise foreign investment in the Islamic republic, increase Iranian government revenues, and allow Iran to project power in the Gulf and the Indian Ocean.

Saudi Arabia, months before the US re-imposition of sanctions, already sought to thwart development of Chabahar by stopping South Korea’s POSCO Engineering & Construction from moving ahead with a $1.6 billion agreement with Iranian steelmaker Pars Kohan Diar Parsian Steel (PKP) to build a steel mill in Chabahar. Saudi Arabia’s Public Investment Fund has a 38 percent stake in POSCO.

“This project mandatorily requires the decision of the board of directors. However, as relations between Iran and Saudi Arabia rapidly grew worse after a severance of diplomatic ties last year, outside directors in the board meeting are having negative stances on Iran projects, especially those requiring investment and JVC (joint venture company) establishment,” POSCO said in a letter to PKP. POSCO said it had difficulty “convincing and reaching consent on the unfavourable opinion from the outside directors.”

The POSCO letter signalled that Chabahar’s success would depend on the political will of governments with India and Iran in the lead rather than on any hope to attract private sector investment.

India was earlier this month forced to drop a demand that the winner of a bid to manage the Chabahar port pay an upfront US$8.52 million premium.

“We were charging a premium from the successful bidder to meet our preliminary expenses. But the shortlisted bidders said that the project is of strategic importance and is not commercially viable,” said an Indian official.

Indian Foreign Minister Sushma Swaraj insisted last month that her country would not bow to US pressure to adhere to the Trump administration’s sanctions. "India follows only UN sanctions, and not unilateral sanctions by any country," Ms. Swaraj said.

Beyond the port’s economic importance for Iran, it will also likely allow the Islamic republic to increase its influence in Afghanistan at a time that the United States and Saudi Arabia are stepping up economic cooperation with Kabul in a bid to isolate both Iran and the Taliban.

For its part, Afghanistan sees the port as a way to reduce its transport dependence on Pakistan with which it has strained relations.

Despite the US cloud hanging over it, Chabahar’s potential significance goes beyond whether it will contribute to the Iranian effort.

India hopes that its US$500 million investment in the port will offer it a gateway to Afghanistan and land-locked Central Asia that constitutes an alternative to infrastructure related to China’s Belt and Road initiative, including the $50 billion plus China Pakistan Economic Corridor (CPEC), and an anti-dote to Chinese investment in Indian Ocean ports.

If geopolitics did not already amount to a full plate, Chabahar is likely, together with a host of ports in Saudi Arabia, Abu Dhabi, Oman and Qatar, to challenge the longstanding dominance in the Indian Ocean of Dubai’s Jebel Ali port.

Commercial competition between ports has been reinforced by the Saudi-Iranian battle for regional hegemony as well as the Gulf spat between Qatar and a Saudi-United Arab Emirates-led alliance that a year ago imposed an economic and diplomatic boycott on the Gulf state and the war in Yemen.

As a result, commercial, military and geopolitical drivers for port investment in the region have blurred and expanded the multiples rivalries into the Horn of Africa with the UAE and others, including Saudi Arabia, Turkey and Qatar jockeying for position in Sudan, Somalia, Ethiopia, Yemen and Djibouti.

Said NATO Defence College analyst Eleonora Ardemagni: “The political rift in the GCC (Gulf Cooperation Council) weakens economic integration prospects and as a consequence cooperation among commercial ports. The Qatari crisis opened a new chapter in intra-GCC relations marking the emergence of latent nationalism in the Arab Gulf region: the rising geopolitics of ports is going to further unveil this trend.”