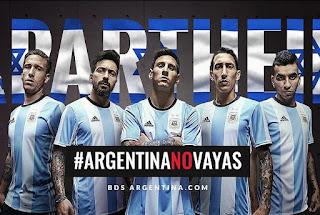 Argentina’s cancellation of a friendly against Israel because of Israeli attempts to exploit the match politically is likely to reverberate far beyond the world of soccer and spotlights the risks of Israeli efforts to persuade the international community to recognize Jerusalem as its capital.

The Argentinian decision suggests that despite the fact several countries, including East European nations, are debating whether to follow US President Donald J. Trump’s decision earlier this year to recognize Jerusalem as the capital of the Jewish state and move the US embassy to the city, Israel is likely to find it difficult to capitalize on the US move in ways that convincingly project widespread international support.

Even worse, the decision illustrates that efforts to force recognition could backfire.

The Argentinian move has buoyed the grassroots Boycott, Divestment Sanctions (BDS) campaign that seeks to isolate Israel in non-violent defense of Palestinian rights after Israel has made countering the movement one of its top foreign policy objectives.

“The cancellation of Israel’s ‘friendly’ match with Argentina is a boost to the Red Card Israel campaign, which has called on FIFA to expel Israel - as it expelled apartheid South Africa - due to its violations against Palestinian football and its disregard for FIFA statutes,” BDS said in a statement.

The cancellation is BDS’s greatest success to date. Before that, it had only persuaded a small number of artists and organizations to boycott Israel.

An online campaign late last year convinced New Zealand singer-songwriter Lorde to cancel a planned concert in Israel. She followed other artists who have cancelled performances, including Elvis Costello, Lauryn Hill and Gorillaz.

The Argentinian decision has prompted concern that it could become the model for similar efforts in the future. One immediate target could be Israel’s scheduled hosting next year of the Eurovision song contest.

Argentina decided to cancel the match in the run-up to this month’s World Cup in Russia after Israel insisted on moving it from the Mediterranean port city of Haifa, home to Israel’s best stadium, to Jerusalem as part of the Jewish state’s 70th anniversary celebrations. Tickets for the Jerusalem match had sold out quickly.

The Israeli embassy in Buenos Aires and Argentinian media said the decision was in response to a series of unidentified "threats and provocations" against star player Lionel Messi and his wife.

“Since they announced they would play against Israel, various terror groups have been sending messages and letters to players on the Argentina national team and their relatives, including clear threats to hurt them and their families. These included video clips of dead children,” said hard-line Israeli Culture and Sports Minister Miri Regev, whom many hold responsible for Israel’s public relations fiasco.

Ms. Regev was referring to video clips that had been circulated by the Islamic State, including pictures of Mr. Messi in an orange jumpsuit and ones that insinuated his beheading. A Palestinian campaign against playing the match in Jerusalem involved images of Mr. Messi’s white and sky-blue striped jersey stained with red paint resembling blood and threats to burn Messi posters.

The Palestine Football Federation (PFF) had early called on its Argentinian counterpart to cancel the match because of the move to Jerusalem, which it described as a violation of world soccer body FIFA’s principle of a separation of sports and politics.

PFF president Jibril Rajoub also urged Palestinian fans to burn pictures of Messi and replicas of his shirt if he played in the match in Jerusalem.

"He's a big symbol so we are going to target him personally, and we call on all to burn his picture and his shirt and to abandon him. We still hope that Messi will not come," Mr Rajoub said after talks with Argentinian diplomats based in the West Bank city of Ramallah prior to the cancellation.

It was FIFA’s ban on political interference in soccer that persuaded Argentine President Mauricio Macri to reject a request by Israeli Prime Minister Benyamin Netanyahu to pre-empt the cancellation of the match.

The Israeli failure to have the match played in Jerusalem strengthens not only the BDS movement.

It also boosts Mr. Rajoub’s so far unsuccessful effort to persuade FIFA and the International Olympic Committee to impose sanctions against Israel because of the Israeli settlements in occupied territory and travel restrictions on Palestinian players and other allegedly security-related measures that hinder the development of Palestinian soccer.

Mr. Rajoub and liberal Israeli newspaper put responsibility for the soccer fiasco at the doorstep of Ms. Regev.

“She’s the main culprit for legitimizing Argentina’s decision not to come… Beyond squandering millions in taxpayer money, in forcing the game to move to Jerusalem, Regev displayed gross intervention…  If the game had stayed in Haifa, it would have happened… There’s a saying that a thousand wise men can’t rescue a coin thrown into a well by a fool….  All it takes is one fool to burn down a forest,” said Haaretz reporter Uzi Dann in an article entitled, Who Needs BDS: Israel Scores Spectacular Own Goal in Argentina Soccer Fiasco

"Instead of soccer, Miri Regev wanted politics and she got politics… It's a great farce that gives immense momentum to the BDS campaign against Israel”, added Itzik Shmuli, a centre-left member of the Israeli parliament.

Israeli President Reuven Rivlin appeared to echo the sentiment by saying that “the politicization of the Argentinean move worries me greatly” even if he blamed the Argentinians for involving politics by cancelling the match.

Assertions by Israeli officials that the Argentinian decision had handed a victory to terrorism may go down well with hard-line public opinion in Israel as well as supporters of Israel across the globe but is unlikely to help Israel forge bridges to opponents of its policies or facilitate its efforts to get a broader international buy-in of its insistence that Jerusalem is the undivided capital of the Jewish state.

Israeli opposition leader Avi Gabbay pinpointed the potential fall-out of the cancellation of the match when he warned on Twitter: “We just absorbed a shot in the face. This is not just sports. This, unfortunately, could start an international tsunami.”