The Saudi-Moroccan spat: Competing for the mantle of moderate Islam 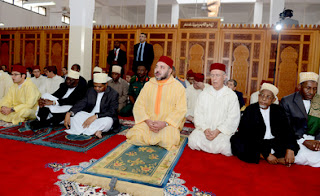 King Mohammed prays in a mosque in Zanzibar

Lurking in the background of a Saudi-Moroccan spat over World Cup hosting rights and the Gulf crisis is a more fundamental competition for the mantle of spearheading promotion of a moderate interpretation of Islam.

It’s a competition in which history and long-standing religious diplomacy gives Morocco a leg up compared to Saudi Arabia, long a citadel of Sunni Muslim intolerance and ultra-conservatism.

Saudi Arabia is the new, baggage-laden kid on the block with Crown Prince Mohammed bin Salman asserting that he is returning the kingdom to a top-down, undefined form of moderate Islam.

To be sure, Prince Mohammed has dominated headlines in the last year with long-overdue social reforms such as lifting the ban on women’s driving and loosening restrictions on cultural expression and entertainment.

The crown prince has further bolstered his projection of a kingdom that is putting ultra-conservative social and religious strictures behind it by relinquishing control of Brussels’ Saudi-managed Great Mosque and reports that he is severely cutting back on decades-long, global Saudi financial support for Sunni Muslim ultra-conservative educational, cultural and religious institutions.

Yet, Prince Mohammed has also signalled the limits of his definition of moderate Islam. His recurrent rollbacks have often been in response to ultra-conservative protests not just from the ranks of the kingdom’s religious establishment but also segments of the youth that constitute the mainstay of his popularity.

Just this week, Prince Mohammed sacked Ahmad al-Khatib, the head of entertainment authority he had established. The government gave no reason for Mr. Al-Khatib’s dismissal, but it followed online protests against a controversial Russian circus performance in Riyadh, which included women wearing "indecent clothes."

The protests were prompted by a video on social media that featured a female performer in a tight pink costume.

In a similar vein, the Saudi sports authority closed a female fitness centre in Riyadh in April over a contentious promotional video that appeared to show a woman working out in leggings and a tank-top. A spokesman for the royal court, Saud al-Qahtani, said the closure was in line with the kingdom’s pursuit of "moderation without moral breakdown."

Saudi sports czar Turki bin Abdel Muhsin Al-Asheikh said “the gym had its licence suspended over a deceitful video that circulated on social media promoting the gym disgracefully and breaching the kingdom’s code of conduct.”

To be sure, the United States, which repeatedly saw ultra-conservative Islam as a useful tool during the Cold War, was long supportive of Saudi propagation of Islamic puritanism that also sought to counter the post-1979 revolutionary Iranian zeal.

Nonetheless, Saudi Arabia’s more recent wrestle with what it defines as moderate and effort to rebrand itself contrasts starkly with long-standing perceptions of Morocco as an icon of more liberal interpretations of the faith.

While Saudi Islamic scholars have yet to convince the international community that they have had a genuine change of heart, Morocco has emerged as a focal point for the training of European and African imams in cooperation with national governments.

The institute has signed training agreements with Belgium, Russia and Libya and is negotiating understandings with Senegal.

Critics worry that Morocco’s promotion of its specific version of Islam, which fundamentally differs from the one that was long prevalent in Saudi Arabia, still risks Morocco curbing rather than promoting religious diversity.

Albeit on a smaller scale than the Saudi campaign, Morocco has in recent years launched a mosque building program in West Africa as part of its soft power policy and effort to broaden its focus that was long centred on Europe rather than its own continent.

On visits to Africa, King Mohammed VI makes a point of attending Friday prayers and distributing thousands of copies of the Qur’an.

In doing so Morocco benefits from the fact that its religious ties to West Africa date back to the 11th century when the Berber Almoravid dynast converted the region to Islam. King Mohammed, who prides himself on being a descendant of the Prophet Mohammed, retains legitimacy as the region’s ‘Commander of the Faithful.’

West African Sufis continue to make annual pilgrimages to a religious complex in Fez that houses the grave of Sidi Ahmed Tijani, the 18th century founder of a Sufi order.

All of this is not to say that Morocco does not have an extremism problem of its own. Militants attacked multiple targets in Casablanca in 2003, killing 45 people. Another 17 died eight years later in an attack in Marrakech. Militants of Moroccan descent were prominent in a spate of incidents in Europe in recent years.

Nonetheless, protests in 2011 at the time of the popular Arab revolts and more recently have been persistent but largely non-violent.

Critics caution however that Morocco is experiencing accelerated conservatism as a result of social and economic grievances as well as an education system that has yet to wholeheartedly embrace more liberal values.

“Extremism is gaining ground,” warned Mohamed Elboukili, an academic and human rights activist, pointing to an increasing number of young women who opt to cover their heads.

“You can say to me this scarf doesn’t mean anything. Yes, it doesn’t mean anything, but it’s isolating the girl from the boy. Now she’s wearing the scarf, but later on she’s not going to shake hands with the boy . . . Later on she’s not going to study in the same class with boys. Those are the mechanisms of an Islamist state, that’s how it works,” Mr. Elboukili said.

Mr. Elboukili’s observations notwithstanding, it is Morocco rather than Saudi Arabia that many look to for the promotion of forms of Islam that embrace tolerance and pluralism. Viewed from Riyadh, Morocco to boot has insisted on pursuing an independent course instead of bowing to Saudi dictates.

Morocco refused to support Saudi Arabia in its debilitating, one-year-old economic and diplomatic boycott of Qatar but recently broke off relations with Iran, accusing the Islamic republic of supporting Frente Polisario insurgents in the Western Sahara.

Moroccan rejection of Saudi tutelage poses a potential problem for a man like Prince Mohammed, whose country is the custodian of Islam’s two holiest cities and who has been ruthless in attempting to impose his will on the Middle East and North Africa and position the kingdom as the region’s undisputed leader.

Yet, Saudi Arabia’s ability to compete for the mantle of moderate Islam is likely to be determined in the kingdom itself rather than on a regional stage. And that will take far more change than Prince Mohammed has been willing to entertain until now.