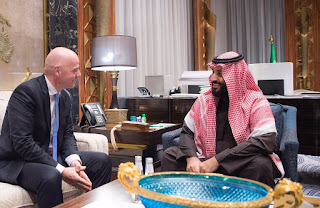 A possible Saudi-Iranian clash on the soccer pitch promises to be a highlight of this month’s World Cup in Russia.

It would add significant drama to multiple soccer-related battles involving Saudi attempts to control Middle Eastern and Asian governance of the sport at the expense of Iran as well as challenges to Qatar’s 2022 hosting rights and its holding of World Cup broadcasting rights that threaten to deprive Gulf fans of access to the Russian tournament’s matches.

For the clash to happen, both Iran, the highest ranked Middle Eastern team to have qualified for the 2018 tournament, and Saudi Arabia, widely viewed as an outsider, would have to make it out of the group stage. That could prove to be for both a tall order.

Nonetheless, the two teams’ presence in Russia is likely to shine a spotlight on the covert wars between Saudi Arabia, the United Arab Emirates and Iran as well as a related dispute with 2022 World Cup host Qatar, which did not qualify for this year’s tournament, even if failure to perform fails to bring the kingdom and the Islamic republic face to face on the pitch.

Iran plays into the dispute with Qatar that this week commemorates the imposition a year of a diplomatic and economic embargo by Saudi Arabia, the UAE, Bahrain and Egypt in part because of the Gulf state’s relationship with the Islamic republic.

Already, Gulf fans are feeling the impact with uncertainty over whether the boycotting states will allow broadcasts of matches by BeIN, the sports subsidiary of the Qatar-owned Al Jazeera television network that owns the broadcasting rights.

The boycotting states are demanding that Qatar shutter Al Jazeera or at least curb its freewheeling reporting and talk shows that often challenge the policies of countries like Saudi Arabia and the UAE.

As a matter of principle, BeIN has been blocked in the boycotting states for the past year. While Saudi Arabia has sought to ignore Qatar’s rights by creating beOutQ, a 10-channel bootlegging operation based in the kingdom, the UAE has backed down from its initial blockage of BeIN broadcasts but maintained its jamming of Al Jazeera.

Unable to challenge the Saudi action in Saudi courts, Qatar has urged world soccer body FIFA to take action against what it described as Saudi pirate broadcasters

In a soccer-crazy part of the world in which the sport is politically sensitive because it evokes the kind of deep-seated passion that religion and nationalist sentiment does, Qatar appears to have decided to stir the pot by blocking BeIN broadcasts to the UAE.

"We regret to inform that our customers are temporarily unable to view beIN sports channels and packages as a result of a decision by the broadcaster of beIN sports," UAE telecom  and digital television company Du said in a statement this weekend on its website.

Qatar’s move appeared to be designed to force UAE carriers to accept commercial terms. In doing so it would score a political success by breaching the boycott.

Its strategy appeared to be working with Du’s competitor. Etisalat, announcing 24 hours after the Du statement that customers could sign up for BeIn  broadcasts of World Cup matches.

The dispute nevertheless reflects deep-seated disagreement within the lame-duck six-nation Gulf Cooperation Council (GCC) over the campaign against Qatar. Oman, which like Qatar maintains close ties to Iran and has offered to mediate, sought to thwart the Saudi bootlegging effort by banning the import of beOutQ decoders.

"The import of these decoders, called beOutQ, was banned because they violate the law on intellectual property," an Omani official said. Oman was responding to a Qatari request.

Qatar’s broadcasting rights are but one soccer battlefield on which the Gulf dispute is being fought.

Saudi and UAE media together with UK tabloid The Sun exploited this week’s London launch of the Foundation for Sports Integrity by Jamie Fuller, a prominent Australian campaigner for a clean-up of global soccer governance.

The launch involved a reiteration of assertions of Qatari wrongdoing in its successful World Cup bid that media like Abu Dhabi’s The National and Saudi Arabia’s Al Arabiya projected as pressure on FIFA to deprive Qatar of its hosting rights.

“It is no secret that football’s governing body is rotten to the core. (FIFA) will rightly come under renewed pressure to strip Qatar of the competition and carry out an internal investigation in the wake of the most recent allegations. The millions of fans eagerly anticipating 2022’s festival of football deserve better,” The National said.

Saudi-owned Ash-Sharq Al Awsat newspaper reported that this month’s FIFA Congress may hold a re-vote on the hosting of the 2022 World Cup. There is no independent indication of such a move.

In a further bid to complicate life for Qatar, Saudi Arabia has backed a proposal to speed up the expansion of the World Cup to 48 teams from 32, which is now scheduled for 2026, by making it already applicable to the 2022 World Cup.

If adopted, Qatar could be forced to share the hosting of the 2022 tournament with others in the region. Iran has already offered to help Qatar.

The Saudi-UAE moves come on the back of a two-pronged Saudi effort to gain a measure of control of global soccer governance.

Global tech investor Softbank, which counts Saudi Arabia and the UAE among its largest investors, is believed to be behind a $25 billion proposal embraced by FIFA president Gianni Infantino to revamp the FIFA Club World Cup and launch of a Global Nations League tournament. If approved, the proposal would give Saudi Arabia a significant voice in global soccer governance.

Complimenting the Saudi FIFA bid is a Saudi effort to undermine the position of the 47-nation Asian Football Confederation AFC headed by Salman Bin Ibrahim Al-Khalifa, a member of the Bahrain ruling family and one of the most powerful men in global soccer.

To do so, Saudi Arabia has unilaterally launched a new regional bloc, the South West Asian Football Federation (SWAFF), a potential violation of FIFA and AFC rules.

The federation would be made up of members of both the AFC and the Amman-based West Asian Football Federation (WAFF) that groups all Middle Eastern nations except for Israel and is headed by Jordanian Prince Ali Bin Al-Hussein, a prominent advocate of soccer governance reform.

The heads of founding member associations, including Bangladesh, India, Pakistan, and the UAE, were flown to Jeddah for the SWAFF launch all-expenses paid, offered gifts and promised funding for soccer development.

SWAFF will be based in Jeddah with Saudi football federation president Adel Ezzat as its head and Saudi sports czar Turki al-Sheikh, a close associate of Crown Prince Mohammed bin Salman, as its honorary president.

The likelihood of SWAFF taking off would effectively weaken the AFC of which Iran is a prominent member. Iran is unlikely to want to join SWAFF given the chance that Saudi Arabia would probably veto Iranian membership.

As a result, Saudi Arabia’s bid for regional soccer hegemony runs parallel to US President Donald J. Trump’s vow to isolate Iran and makes a mockery of global sports governance’s insistence that sports and politics are separate.

The joker in the Saudi bid are East Asian nations with China, Japan and South Korea in the lead, that are powerhouses within the AFC and maintain close economic and diplomatic ties to the kingdom but have studiously remained on the side lines of its struggle with Iran. East Asian nations are unlikely to want to be sucked into Saudi Arabia’s battles.