Parallels between Turkish soccer and general elections could prove uncanny 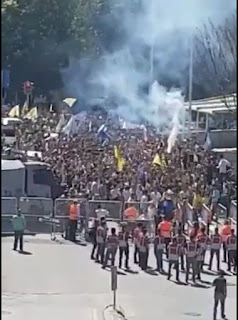 With electoral upsets having become the norm, the latest upheaval that last week swept aside the long-standing president of Fenerbahce SC, the political crown jewel of Turkish soccer, has taken on added significance with Turkey heading into crucial snap presidential and parliamentary elections on June 24.

The parallels between Turkish President Recep Tayyip Erdogan and his defeated ally, Aziz Yildirim, who headed Fenerbahce for more than 20 years, become even more striking given that Middle Eastern soccer pitches often serve as barometers of political trends.

To be sure, Mr. Erdogan remains Turkey’s most popular politician and the so far undisputed frontrunner in the historic poll that will see Turkey transition from a parliamentary to a presidential system. His chances are bolstered by his control of much of the media as a result of economic pressure as well as turning Turkey into one of the world’s foremost jailers of journalists.

Yet, the spectre of Mr. Erdogan failing to win an unqualified majority or even worse loosing looms for the first time since he became prime minister in 2002 and president in 2014. Mr. Erdogan’s ruling Justice and Development Party (AKP) faces a united opposition for the first time against the backdrop of political, economic and social turmoil; electoral fatigue; and a lacklustre AKP election campaign.

“People are not enthusiastic this time — neither us nor our voters. We are just saying the same things as before: we built a new bridge, we are building a new airport. There are no good slogans, no good songs,” the Financial Times quoted an AKP official as saying.

Mr. Yildirim was the first public figure to become embroiled in the dispute between Mr. Erdogan and exiled Islamic scholar Fethullah Gulen, whom the president has accused of being behind a failed military coup in 2016.

Mr. Erdogan has used the botched attempt to topple him to strengthen his grip on power by cracking down on the media; purging tens of thousands from the ranks of the bureaucracy, the judiciary, the military and academia, and increasingly transforming Turkey into an illiberal democracy at best.

Messrs. Erdogan and Yildirim have dominated their respective spheres of influence for much of the last two decades. Mr. Yildirim ensured that his club’s traditional ties to the state became ever closer. Fenerbahce is Mr. Erdogan’s favourite team.

Mr. Yildirim was overwhelmingly defeated by Ali Koc, a business tycoon, who in 2013 provoked Mr. Erdogan’s ire by opening his hotel on Istanbul’s iconic Taksim Square to anti-government Gezi Park protesters who were being attacked by law enforcement forces.

Like Mr. Erdogan, Mr. Yildirim aggressively attacks his detractors, in many way believes that he is above the law, and positions himself as the only candidate capable of resolving his club’s economic woos that like Turkey itself is mired in some $200 million of debt.

And like Mr. Erdogan, Mr. Yildirim hoped that his emphasis on development and construction projects, including a new stadium and indoor gymnasium, would secure him another term.
Mr. Erdogan’s campaign harps on his massive infrastructure projects that have helped balloon Turkey’s debt to $453.2 billion.

Messrs. Erdogan and Yildirim both see themselves as underdogs. Mr. Erdogan was jailed for four months in 1999 for reading a poem that was considered inflammatory.

Like Mr. Erdogan, Mr. Yildirim used his imprisonment in 2012 after being implicated in Turkey’s largest match fixing scandal that erupted as part of a battle between Mr. Erdogan and his former ally, Mr. Gulen, the scholar who leads what was once of the world’s richest Islamic movements, as a tool to garner sympathy and votes.

The election tactics failed to work for Mr. Yildirim. While Mr. Yildirim’s campaign built on the pork barrel politics of construction, Mr. Koc, his opponent, focussed on the economy of the future with a team made up of information technology and product design experts as well as bankers, even if construction is one main stay of his conglomerate, the largest in Turkey. Koc Holding accounts for ten percent of the country’s GDP.

Similarly, Mr. Ince, the opposition candidate who started his career as a physicist, campaigns on promises of innovation. He emphasizes robotics and design and the need to enhance knowledge and upgrade critical and innovative thinking.

If the record of the past two years is any indication, voters, who have lost confidence in their political systems and leaders produce upsets when they go to the polls. Mr. Yildirim’s defeat mirrors the defeat of traditional politicians by the likes of US President Donald J. Trump and populists in central and Eastern Europe. Most recently, the return of Malaysia’s Mohamd as the world’s oldest elected head of government constituted a vote against the status quo.

Drawing conclusions from Mr. Yildirim’s defeat would be folly. But so would ignoring the message it bears. At the very least, it suggests that Mr. Erdogan’s hope that a snap election would easily secure him another term is in question and that he may be fighting his most difficult election yet.