Murder in The Hague: Saudi-Iranian proxy war heats up 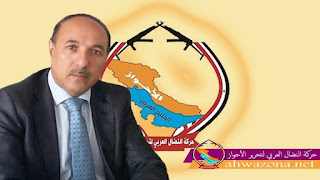 Shot dead this week on a street in The Hague, Ahmad Mola Nissi may have died the violent life he lived, but his murder suggests a possible retching up of the proxy war between Saudi Arabia and Iran as well as a step towards Saudi-US-efforts to destabilize Iran by stirring unrest among its ethnic minorities.

A 52-year-old refugee from Iran in the Netherlands since 2005, Mr. Mola Nissi headed a militant nationalist group of Iranian Arabs that intermittently attacked targets in Khuzestan, Iran’s oil-rich province populated by a large Iranian Arab community. The targets of attacks in 2005, 2006 and 2013 included oil facilities, the office of the governor in the regional capital of Ahwaz, other government offices, and banks.

Mr. Mola Nissi and a second activist, Habib Jaber al-Ahvazi also known as Abo Naheth, survived an Iranian crackdown on the group, The Arab Struggle Movement, that seeks independence for Khuzestan, by escaping to Syria from where they found refuge in Europe.

Activists said they had since focussed primarily on media activism and fund raising, at times creating footage of alleged attacks involving gas cylinder explosives to attract Saudi funds.
No one has claimed responsibility for Mr. Mola Nissi’s killing and Iranian opposition sources blame the regime in Tehran. Some Iranian Arab activists, however, expressed surprise at the killing.

“I don’t believe the regime will do such a crazy, stupid crime in Europe that would severely damage the regime’s reputation. I personally don’t believe the regime wants to destroy its ties with the EU for such a person (Ahmad Mola),” one activist said.
Nonetheless, Mr. Mola Nissi was shot dead as he was preparing to establish a television station staffed with Saudi-trained personnel and funding that would target Khuzestan, a south-eastern province that borders on Iraq and sits at the head of the Gulf, according to activists.

The killing comes against the backdrop of an escalation in Saudi-Iranian tensions with the resignation of Lebanese Prime Minister Saad Hariri, the firing by Yemeni Houthi rebels of a ballistic missile at Riyadh’s international airport, publication of a blueprint to destabilize Iran using the Pakistani province of Balochistan as a spring plank, and a flow of funds to militants in the troubled Pakistani province. Saudi Crown Prince Mohammed bin Salman fuelled the fire when he declared in May that the fight with Iran would take place “inside Iran, not in Saudi Arabia.”

Former Saudi intelligence chief and envoy to Britain and the United States, Prince Turki al-Faisal, who often serves as an unofficial voice of the Saudi government, twice in recent years spoke at rallies organized by the Mujahedeen-e-Khalq, an exiled Iranian opposition group, that based itself in Iraq during the Saudi-backed Iraqi war against Iran in the 1980s. Prince Faisal told one of the rallies that "your legitimate struggle against the (Iranian) regime will achieve its goal, sooner or later. I, too, want the fall of the regime.”

Pakistani militants in the province of Balochistan have reported a massive flow of Saudi funds in the last year to Sunni Muslim ultra-conservative groups while a Saudi thinktank believed to be supported by Prince Mohammed published a blueprint for support of the Baloch and called for “immediate counter measures” against Iran.

Prince Turki’s remarks fit a pattern of Arab calls for independence of Khuzestan. Writing in 2012 in Asharq Al Awsat, a Saudi newspaper, Amal Al-Hazzani, an academic who has since been dropped from the paper’s roster after she wrote positively about Israel, asserted in an op-ed entitled “The oppressed Arab district of al-Ahwaz“ that “the al-Ahwaz district in Iran...is an Arab territory... Its Arab residents have been facing continual repression ever since the Persian state assumed control of the region in 1925... It is imperative that the Arabs take up the al-Ahwaz cause, at least from the humanitarian perspective.”

Eruptions of discontent in Khuzestan, particularly on soccer pitches when Asian competition matches are played against teams from the Gulf, have become a fixture in Khuzestan that for decades has been an overt and covert battlefield in the struggle between Saudi Arabia and Iran for regional hegemony. Mr. Al-Ahvazi told online Arab nationalist Ahvaz.tv in 2015 that  soccer protests were part of an “ongoing confrontation between demonstrators and the forces of the Persian occupation.”

Protests have focussed on identity, environmental degradation, and social issues. Iranian politicians warned of a “national threat” in February when riots erupted in 11 cities in Khuzestan after they lost power during a severe dust storm. The outages led to water shortages as water and wastewater treatment plants were knocked offline. Demonstrators chanted "Death to tyranny", "We, the people of Ahwaz, won't accept oppression" and "Clean air is our right, Ahwaz is our city."

International human rights groups have long accused Iran of discriminating against Iranian Arabs even though many are Shiites rather than Sunni Muslims. Dozens of protesters were reportedly killed during demonstrations in Ahwaz in 2011 that were inspired by the popular Arab revolts.

“Despite Khuzestan's natural resource wealth, its ethnic Arab population, which is believed to constitute a majority in the province, has long complained about the lack of socio-economic development in the region. They also allege that the Iranian government has engaged in systematic discrimination against them, particularly in the areas of employment, housing, and civil and political rights,” Human Rights Watch said at the time.

Mr. Mola Nissi’s assassination remains shrouded in mystery with no clear identification of potential suspects and no claim of responsibility. It raises, however, the spectre of both an escalation in the Saudi-Iranian rivalry and the possibility of it expanding beyond the Middle East itself. “The murder remains unresolved, but it doesn’t bode well and is hard to separate from what’s going on in the region,” said one analyst.

Dr. James M. Dorsey is a senior fellow at the S. Rajaratnam School of International Studies, co-director of the University of Würzburg’s Institute for Fan Culture, and co-host of the New Books in Middle Eastern Studies podcast. James is the author of The Turbulent World of Middle East Soccer blog, a book with the same title as well as Comparative Political Transitions between Southeast Asia and the Middle East and North Africa, co-authored with Dr. Teresita Cruz-Del Rosario and  Shifting Sands, Essays on Sports and Politics in the Middle East and North Africa
Iran Saudi Arabia