Qatar 2022 – are the hosts getting a fair hearing? (JMD quoted on Play the Game)

Qatar 2022 – are the hosts getting a fair hearing? 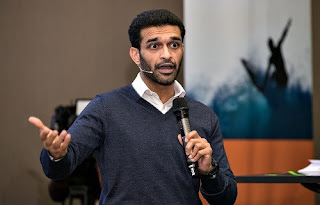 Hassan Al Thawadi, Secretary General of the Supreme Committee for Delivery & Legacy, speaking at Play the game 2017. Photo: Thomas Søndergaard/Play the Game
26.11.2017
By Marcus Hoy
Play the Game 2017 heard a less common narrative on Qatar’s successful 2022 World Cup bid from Hassan Al Thawadi, Secretary General of Committee for Delivery and Legacy.
FIFA’s 2010 decision to award the 2022 World Cup to Qatar was greeted with incredulity by many in the football community. It seemed impossible that then-FIFA Executive Committee, which contained such officials as Sepp Blatter, Mohamed Bin Hamman and Jack Warner, would “give away” the tournament to the tiny, oil-rich Gulf state.
However, the man who is heading the local Supreme Committee for Delivery and Legacy, Hassan Al Thawadi, attended the Play the Game conference to offer an alternative narrative.  Admitting that “a lot of people were unhappy” with FIFA’s surprise choice, Al Thawadi described the winning bid as “top notch,” and denied that the tournament had been bought.
“If England had won, would anyone have questioned the result?” he said. “No one claimed that the whole system was flawed before the bidding process was complete. We have always been open and transparent.”
He admitted that the successful bid was “born into fire” due to the composition of the Executive Committee, but maintained that his nation had been cleared of any wrongdoing by a 2014 report from the then-FIFA Ethics Committee Chairman Michael J. Garcia.
“Many challenges on the ground” still exist, Al Thawadi admitted, not least the conditions of migrant workers. However, he added that issues related to work and welfare are “not unique to Qatar”.
Born into fire
A number of circumstances favored the Qatari bid above others, Al Thawadi claimed.
Due to the extreme heat, he said, the region has never hosted such a major event but today’s state-of-the-art stadium cooling technology has now made this possible. The bid was strengthened, he said, as it would serve as a platform to help “heal the wounds of the region” and allow the people in the Middle East to interact with those from other nations. FIFA’s opinion had also been swayed by the fact that the bid was well-presented, professional and inclusive, he stressed.
“It’s easy to be cynical. We are living in a world that pokes holes in our dreams,” Al Thawadi said. “But we are delivering on the unimaginable.”
James Dorsey, author and Senior Fellow at the S. Rajaratnam School of International Studies, told the conference that he was “more or less convinced” that the bidding process was flawed but added that he supported holding the tournament in Qatar. Unlike many other nations, he said, the staging of the tournament could trigger real change.
“This is more than can be said for a whole bunch of other World Cups and major events,” he added.
When it comes to hosting the World Cup, Dorsey said, the sanctions imposed by Qatar’s Gulf neighbors are the “least of its problems”. The crisis has already become “the new normal”, he said, though a travel ban from other states in the region may affect attendances at the tournament.
Dorsey also applauded the fact that the World Cup has brought the treatment of migrant workers on to the agenda in Qatar. Many other nations have worse records in this area, he pointed out.
FIFA Qatar World Cup 2022