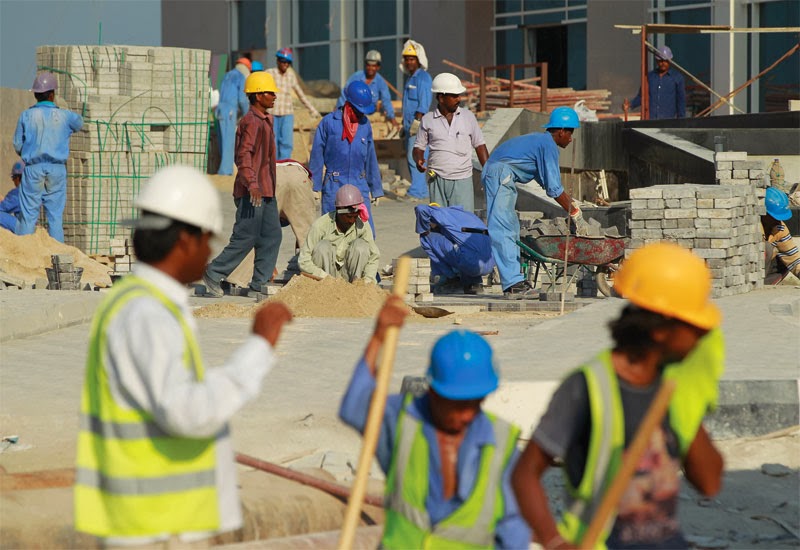 Qatari organizers of the 2022 World Cup -- in a bid to fend off criticism in the European parliament, convince world soccer body FIFA of progress made in improving conditions of foreign workers, and side line political demands by international trade unions – has issued the Gulf state’s most detailed workers welfare standards to date.

The 50-page document to be included in all World Cup-related contracts was issued two days before a hearing in the European parliament at which FIFA executive Theo Zwanziger is expected to testify on Qatar’s progress.

Qatar has been under pressure by the International Trade Union Confederation (ITUC) and human rights groups since winning the World Cup hosting rights to address concerns about the living and working conditions of foreign workers, who account for a significant majority of the Gulf state’s population. Critics noted that the standards do not apply to a majority of vast infrastructure projects that don’t fall under the purview of the World Cup organizers.

FIFA publicly joined the fray following reports last fall in Britain’s The Guardian and other media detailing a high death rate among workers and appalling living and working conditions. It demanded late last month that Qatar report progress in addressing the issues in advance of this week’s parliament hearing and next month’s FIFA executive committee meeting.

The ITUC charged in a statement that the Qatari Supreme Committee for Delivery & Legacy’s Workers’ Welfare Standards “do not deliver fundamental rights for workers and merely reinforce the discredited kafala (sponsorship) system of employer control over workers.”

The union criticized details of the standard but reserved its harshest criticism for the committee’s failure to address the sponsorship system or its more political demands for workers’ rights to form independent unions and engage in collective bargaining.

Qatari officials noted that the kafala system as well as the ITUC’s political demands fall beyond the committee’s authority and were the responsibility of other ministries and government entities. They drew a distinction between the approach of the International Labour Organization (ILO), which was involved in the drafting of the standards, and that of the ITUC. It was not immediately clear if the committee had invited the ITUC to participate in the drafting of the standards.

The ITUC’s political demands cut to the core of Qatar’s political and social existence. The call for free trade unions and collective bargaining challenges the political system in what is an enlightened autocracy. Together with the kafala system which makes workers dependent on their employers for their permits and restricts their freedom to seek alternative employment or travel, those demands raise existential issues in a country in which the citizenry accounts for at best 15 percent of the population.

The ILO and human rights organizations, while sharply critical of the kafala system, have acknowledged that many Qatari rules and regulations go a significant distance in meeting international standards. Qatari officials have admitted in the past that they were lagging in enforcing those rules but note that the labour ministry has in recent months increased its number of inspectors by 30 percent.

Similarly, the impact of the newly issued Workers’ Welfare Standards stands and falls with their enforcement. With only 38 workers working currently working under contracts that fall within the responsibility of the supreme committee, officials say the degree of enforcement will only be evident later this year as work on World Cup-related infrastructure kicks into higher gear. The committee in its document vows that the standards will be “robustly and efficiently monitored and enforced.”

On paper, the standards constitute a significant improvement in shaping workers’ working and living conditions. Following in the footsteps of Qatar Foundation, the state-owned entity, that funds education, science and community development, the standards extensively address the recruitment of foreign workers, which constitutes one of the most onerous segments of the migration cycle.

Workers often arrive in Qatar seriously indebted to recruiters who charge them significant fees for recruitment and passage to the Gulf state. Those fees can include an average kickback of $600 per worker to an employer’s recruitment executive. Qatar Foundation last year enshrined in its charter the principle that a worker should not pay for his or her recruitment.

The committee’s standards demand that a workers’ welfare compliance plan be part of all tender documents. The plan would need to include a template for contracts with recruitment agencies registered with the Qatari labour ministry in a bid to cut out unethical middlemen and combat corruption. The ITUC asserted that the ministry has so far failed to stop the charging of fees even though they violate Qatari law.

The standards further address a host of issues that are at the core of harsh criticism of Qatar that has cost it significant reputational damage. These include assurances that workers’ passports shall not be confiscated by their sponsors; ensuring timely payment of wages; guarantees that workers will not be penalized for filing complaints; a hotline for workers to file complaints; health, safety and security standards; provisions for adequate housing; hiring of a company worker welfare officer; and a four-tier monitoring and enforcement system.

In its statement, the ITUC charged that “not a single change has been made or recommended to Qatar’s laws that deny workers their fundamental rights. No workplace voice or representative is allowed for migrant workers in Qatar. A worker welfare officer appointed by the employer is no substitute for a duly nominated worker representative.” It dismissed the standards as an “old, discredited self-monitoring system which has failed in the past in Bangladesh and other countries where thousands of workers have died” – an apparent reference to Bangladesh’s textile industry that has witnessed multiple incidents as a result of unenforced standards.

Denouncing the standards as ‘a sham,” the union asserted further that the standards provided for only one social worker for every 3500 employees did not provide details of how complaints would be handled or who would manage the hotline; failed to set up a system to record workers’ deaths ensure autopsies; did not express the intention to prosecute contractors for breaches; and made no reference to Qatar’s high summer temperatures.

“Qatar has to change its laws, nothing else will do,” the statement quoted ITUC secretary general Sharan Burrow as saying.

Countered a Qatari official: “This is a significant step forward. It is part of a process to unify standards with other major stakeholders in the country. It contains a lot of positive decisions.”

The question is whether the steps will be enough to satisfy Qatar’s most ardent critics. Most probably little short of abolishing the kafala system will and that entails significant social and political change that cannot be achieved with the stroke of a pen.