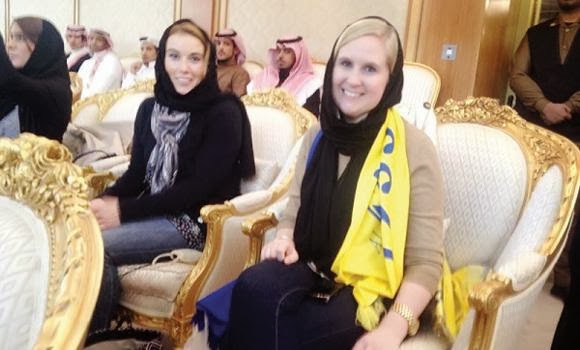 A Saudi debate about the societal role of soccer expanded this week with controversy over a group of female American Congressional staffers being allowed to watch a match in a Riyadh stadium from which Saudi women are barred and a video in which a teacher encouraged his students to chant slogans for a soccer club rather than the national anthem.

The expanded debate hooks into a broader debate about women’s rights in a country that upholds gender segregation; bans women from driving, attending sports matches and forces women’s soccer clubs to operate in a legal and social nether land; and in general provides few sporting opportunities for women. A Saudi student allegedly died earlier this month after officials at King Saud University refused to allow male emergency responders entry to the women only section of the campus to apply first aid.

In the latest twist of the debate on women’s rights, Saudi media quoted female entrepreneurs as saying they were forced to close down shops because their women employees had difficulty finding affordable transport to and from work. With relatively few municipal busses offering separate sections for women, women are forced to either hire a full-time driver or pay for expensive taxis.

The restrictions on women’s sports appear at odds with public opinion. A Saudi sociologist concluded in November on the basis of a survey that the vast majority of Saudis favour granting women the right to engage in sports. The survey conducted by Mariam Dujain Al-Kaabi as part of her master thesis showed that 73.5 percent of the respondents unambiguously endorsed a woman’s right to engage in sports while 21.6 percent felt that it should be conditional.

There are no official facilities for female athletes or physical education programs for girls in schools in the kingdom. Spanish consultants hired to draft Saudi Arabia’s first ever national sports plan were instructed by the government to do so for men only.

Saudi Arabia alongside Yemen was the only Middle Eastern nation that refused last year to sign on to a campaign by the region’s soccer associations grouped in the West Asian Football Federation (WAFF) to put women’s soccer on par with men’s football.

Human Rights Watch last year accused Saudi Arabia of kowtowing to assertions by the country's powerful conservative Muslim clerics that female sports constitute "steps of the devil" as well as a corrupting and satanic influence that  would spread decadence. The clerics warn that running and jumping could damage a woman's hymen and ruin her chances of getting married.

Saudi Arabia in which the beautiful game was legalized only in the 1950s has long had an ambiguous relationship to the sport. The revived debate about women’s rights and nationalism expands discussion in recent days about the role of soccer.

That debate on social media, increasingly the only public space where Saudis can express dissenting views, was prompted by a father’s decision not to send his 10-year old to school for several days after his son’s team, Al Hilal FC (The Crescent), lost a derby with its arch rival, Al Nasr FC, and a You Tube video in which Saudi cleric Sheikh Ibrahim al-Zobaydi derby warned that soccer ‘fanaticism’ threatened to destroy Saudi society.

The decision at the request of Saudi Arabia’s Shura or Consultative Council, a largely toothless body intended to project a sense of popular participation, to allow the female American Congressional staffers to attend a match between Al Nasr and Al Shabab FC revived intermittent efforts in recent years to lift the ban on Saudi women joining their male counterparts as spectators in stadia. ‘The move was aimed at impressing the Americans with the Kingdom’s advanced sports facilities,” the Jeddah-based Arab News quoted a Saudi official as saying.

The granting of permission to the Americans followed a flurry of statements and denials last year about allowing Saudi and/or foreign women into stadia. Such flurries of contradictory statements often are an indication of debate within the inner councils of the secretive, deeply religious kingdom. 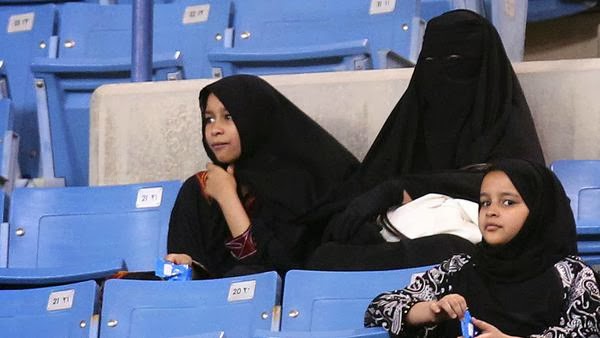 Prince Nawaf bin Faisal, the head of the youth welfare authority that oversees Saudi sports, denied in September that women would be allowed to attend a match between the kingdom and New Zealand. That denial was called into a question by a picture on the website of the Saudi-owned Al Arabiya television network of a few women and children in the stadium during the game. Prince Nawaf issued his denial in response to an announcement by the manager of Riyadh’s King Fahad Stadium, Sulaiman al-Yousef that foreign women and children would be permitted to watch the match.

The Americans’ presence sparked renewed calls for a lifting of the ban on women attending matches. “Why do the authorities allow foreign women to enter stadiums while they deny Saudi women the same privilege?” asked a commenter who identified himself as Saudi in the Arab News’ online comment section.

“Double standards of the Saudi Government!!,’ quipped Ahmed. ‘Change is unavoidable. Let the foreigners lead the way, take the heat - as long as our national women can follow soon,” added Kolwyntjie. “Welcome to American women but a huge kick for rest of women. It’s shameful really!! It’s like a big slap. One rule is for someone & other rule is for others. That's what I can say!!! Our Religion ISLAM teaches the lesson of EQUALITY!!!!,”said Humanity.

Saudi Arabia’s soccer-related debate was further fuelled by some Saudis expressing outrage at a teacher who encouraged his students in an online video to chant “I am an Al-Nasr fan” instead of singing the national anthem. They called on Twitter on the education ministry to discipline the teacher.

“This teacher cannot be trusted. In this video, he can be seen instilling unhealthy attitudes among students. This is indoctrination,” one tweeter said.