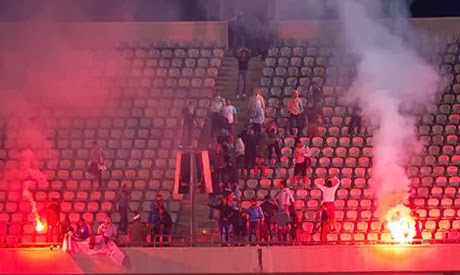 Zamalek ultras storm stadium in protest against ban on spectators

An Egyptian government initiative to build more than a thousand new soccer pitches to “keep youth off the streets” against the backdrop of a rising number of clashes between fans and security forces and a likely extension and expansion of the ban on spectators attending matches highlights the opportunities and threats the beautiful game poses for Middle Eastern and North African autocratic rulers.

A youth ministry official told Al-Shorfa.com, a news website operated by the US military’s Central Command, that the government was investing $93 million in 1,100 pitches across soccer-crazy Egypt that would be built by the end of this year. An Egyptian Football Association official told the website that the pitches would help produce a new generation of professional soccer players.

The decision to build the pitches came as 25 policemen were injured in clashes with militant soccer fans, a court sentenced 15 other fans to two years in prison for demonstrating without a license in an earlier incident, another court acquitted six security officials on charges of responsibility for the death of 83 protesters during the 2011 popular revolt that toppled president Hosni Mubarak in which fans played a prominent role, and world soccer body FIFA censored the government for interference in the affairs of one of the country’s soccer clubs.

The incidents reflect the dilemma that soccer creates for Middle Eastern and North African autocrats. The pitch offers itself in autocratic countries alongside the mosque as the foremost contested public space that autocrats cannot fully control and are unable to simply shut down. At the same, time it also creates opportunities for them, including the ability to polish their image through association with the region’s most popular form of entertainment, the possibility to distract public attention away from widespread grievances, and at times the chance to manipulate public emotion in their favour.

As a result, the Egyptian government’s effort to promote soccer and use the sport to garner public support amounts to a double-edged sword in an environment in which the return to repressive autocracy following last July’s military coup that toppled Mohammed Morsi, Egypt’s first and only democratically elected president, is undermining the post-Morsi military backed regime’s legitimacy.

Egyptian strongman General Abdel Fattah al-Sisi is widely expected to stand for election in forthcoming presidential elections slated for April which he would likely win with a landslide. General Al-Sisi has emerged as a cult figure since he toppled Mr. Morsi whose Muslim Brotherhood succeeded in barely a year in office to become the country’s most reviled political grouping. The military-backed government resigned on Monday in a move that some analysts speculated was designed to pave the way for the presidential candidacy of General Al-Sisi who doubled as defence minister in the outgoing cabinet.

With the military’s banning of the Brotherhood as a terrorist organization, repressive restrictions on the right to demonstrate and freedom of expression, the killing of some 2,665 protesters since the overthrow of Mr. Morsi and the arrest of thousands more according to human rights activists, the expansion of the crackdown to include not only Islamists but youth who were in the vanguard of the rebellion against Mr. Mubarak, and the emergence of an armed Islamist insurgency, soccer has re-emerged together with universities as  a protest platform.

Like in the days of Mr. Mubarak, soccer evokes deep-seated passions among a majority of Egyptian and gives disaffected youth an opportunity to confront police and security forces, together with the Brotherhood the country’s most despised institutions. Years of confrontation with security forces in stadia and popular neighbourhoods has instilled among militant soccer fans a sense of intolerance towards what they perceive as abuse and mistreatment.

That sentiment is compounded by a widespread belief among the fans who constitute one of the country’s largest civic groups that they have been deprived of the opportunity to realize the goals of the 2011 popular revolt that included a quest for dignity, social justice, greater freedom and an end to corruption.

Fear of the militant soccer fans or ultras has prompted the interior ministry to suspend soccer matches for much of the past three years. Moreover, fans have been banned from attending domestic league matches since the suspension was lifted late last year. Egypt’s worst sporting incident occurred early last year during a brief period in which soccer matches were allowed in the presence of supporters. 74 people, mostly fans of storied Cairo club Al Ahli SC, were killed in a politically loaded brawl in the Suez Canal city of Port Said.

The ministry this month delayed a decision to lift the spectator ban and is considering expanding it to international matches following clashes last week between security forces and Al Ahli ultras. 27 fans and 25 policemen were injured at the end of a Confederation of African Football (CAF) CAF Super Cup match between Al Ahli and Tunisia's CS Sfaxien. The clashes were sparked by the fans’ chanting of slogans against the police and the interior ministry. An unverified video posted on YouTube showed fans beating an officer with a stick.

The ban on spectators is proving in and of itself to be a lightning rod that is compounded by the re-emergence of police and security forces as an unaccountable a law unto themselves. Al Ahli’s Cairo arch rival Al Zamalek SC was fined last month after the club’s militant fans stormed the stadium during a closed door domestic match. “This is a state of injustice and aggression… Those who confront tyranny are captured and killed,” the Ultras White Knights (UWK), the militant Zamalek support group, said after two of its members were sentenced to two years in prison for wearing a scarf with the words ‘permanent revolution.’

Anger is further fuelled by the refusal of successive post-Mubarak governments to hold security forces accountable for the deaths of more than 1,000 anti-government protesters prior to Mr. Morsi’s downfall as well as the return and rehabilitation of Mubarak era businessmen who were either suspected or indicted on charges of corruption. This month’s acquittal of the police officers was the latest in a string of trials that rights group say failed to hold the country's security forces accountable for demonstrators' deaths.

Said a militant soccer fan in a tone of disgust; “This is Sisi’s Egypt: protesters go to jail and the police can do whatever they want. This is what shaped us under Mubarak. This is what is shaping us now.’