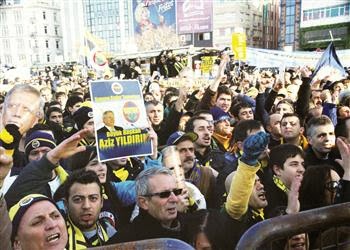 Always murky, Turkish soccer politics have become even murkier as a politics-laden match-fixing scandal meshes with a corruption investigation that targets Prime Minister Recep Tayyip Erdogan and his closest associates.

Defendants in both scandals – Mr. Erdogan and the management of one of Turkey’s most storied clubs – portray the allegations against them as part of a power struggle between the prime minister and a self-exiled preacher who heads one of the world’s most formidable Islamist movements.

To tens of thousands of anti-government protesters mobilized last Sunday by fans of Istanbul’s Fenerbahce Spor Kulubu for the largest anti-government demonstration since last June’s Gezi Park protests on Istanbul’s Taksim Square, the two scandals are expressions of a growing rot in Turkish politics and society. The protesters called for justice not only for Fenerbahce but all of Turkey, expressed support for Fenerbahce chairman Aziz Yildirim who is appealing a conviction on match fixing charges, and denounced Mr. Erdogan as a thief.

Like last year’s Gezi Park protests, the largest in Mr. Erdogan’s decade in office in which soccer fans played a key role, Sunday’s Fenerbahce march  reflected growing public anger at a prime minister who has become increasingly haughty and authoritarian. The Gezi Park protests, sparked by government plans to replace a park with a shopping mall, were a precursor for the corruption investigation into public works, zoning and ties between senior government officials and prominent businessmen.

Few doubt that Turkish soccer is riddled with match-fixing and hampered by an incestuous relationships with politics. That was no more evident when two years ago Mr. Yildirim was indicted with 92 others for match-fixing. Mr. Yildirim, who has denied the charges, was sentenced to six years in prison and is now engaged in his final appeal. He could be put behind bars for several years and banned for life from professional soccer.

Fans chanted “Establish a [political] party, Aziz Yıldırım” and “Thief Tayyip Erdogan,” a slogan often heard during Fenerbahce matches even though the club has long been viewed as nationalist. The denunciation of Mr. Erdogan contradicted Mr. Yildirim’s implicit suggestions that the prime minister’s Islamist rival, Fethullalh Gulen, manipulated the court verdicts. Mr. Gulen, who heads a global educational empire and owns some of Turkey’s most influential media, is believed to have significant sway in Turkey’s judiciary and police force.

A battle two years ago between Mr. Erdogan and Mr. Gulen over how to handle the match fixing scandal effectively amounted to a struggle for control of Fenerbahce, the crown political jewel in Turkish soccer because of its tens of millions of supporters.

“As I said from the very beginning, the court case regarding match-fixing in Turkey is a political case, and the ruling of this case has also been made politically. I do not respect or recognize this court,” Mr. Yildirim said last month after losing his first appeal. Fenerbahce issued a press release this week peppered with quotes of Mr. Erdogan’s pointing the finger at Mr. Gulen’s alleged control of the judiciary.

“We would like to declare to the global public opinion; the only truth lying before Turkey in the aftermath of this operation which now lacks any sense of legitimacy is that, the right to fair trial, in accordance with the European Convention of Human Rights and the judgments and decisions of the European Court of Human Rights, is a must for all Turkey, and in particular, Fenerbahce Sports Club,” the club said in its statement.

The divergence of opinion on Mr. Erdogan, a Fenerbahce member and former soccer player, between fans and the club’s management reflects the corruption scandal’s rekindling of widespread public discontent that exploded last summer on Taksim Square.

Mr. Erdogan who is serving his third term initially came to office with a record of being clean in a country in which politicians are perceived to be corrupt. He risks, as a result of the latest corruption scandal, losing that aura.

Mr. Erdogan portrays the corruption scandal that has implicated the sons of three ministers and the head of a state-owned bank alongside prominent businessmen with government ties and could embroil the prime minister’s son as a power grab by a state within the state, a reference to Mr. Gulen. The two men joined forces early in Mr. Erdogan’s rule in successfully subjecting Turkey’s powerful military to civilian supervision.

Mr. Gulen’s movement was further instrumental in the initial rise of Turkey’s appeal across the Middle East, North Africa and in sub-Saharan Africa by employing its vast global network to pave the way for Turkish diplomacy and business. Mr. Gulen and Mr. Erdogan have since gradually parted ways as they appealed for support to different segments of conservative Turkish society.

The case of Mr. Yildirim, a defence contractor with long-standing ties to the government, has been enmeshed in politics since day one. Mr. Erdogan drove through parliament a bill that limited punishment for match fixing immediately after the scandal erupted despite opposition from President Abdullah Gul, who like Mr. Gulen, favoured the existing severe penalties. Mr. Gulen was believed to have viewed the match fixing scandal as an opportunity to replace Mr. Yildirim with someone closer to his Cemaat movement.

Three months later Mr. Erdogan got the Turkish Football Federation (TFF) to clear Fenerbahce and others of charges of match-fixing. That did not stop the judiciary from pursuing the scandal as a criminal matter. It took however the eruption of the broader construction and public works scandal for Mr. Erdogan to remove prosecutors and police officers whom he believed were associated with Mr. Gulen.

The controversial TFF decision came three months after the soccer body against Mr. Erdogan’s wish rejected a proposal backed by the prime minister that would have shielded clubs guilty of match fixing from being relegated. The defeat of the proposal prompted the TFF’s three top officials, including its vice chairman, Goksel Gumusdag, a brother-in-law of Mr. Erdogan, to resign.

Mr. Erdogan’s involvement resembled more recent reports in leaked tapes and statements by journalists about how the prime minister and members of his government regularly pressure editors and reporters to change their reporting to suit the government’s political needs. The prime minister has in recent days also rammed through parliament legislation that gives the government greater control of the judiciary and Internet access.

“The judiciary has been used as a weapon against all the opposition no matter what field of social life is it coming from. Fenerbahce, its members and its fans are protesting against the tricks and the system. Enough is enough. We stand against illegality, a gang-led legal system and anti-democratic establishments,” said a lawyer and fervent Fenerbahce fan.