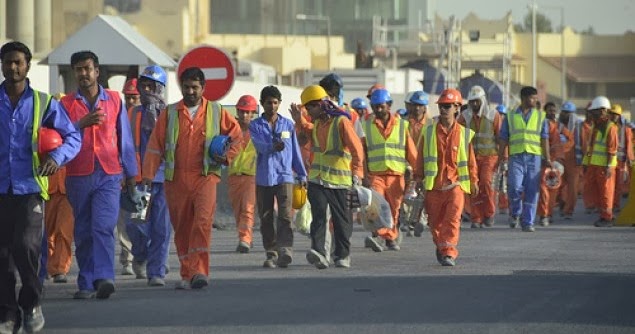 A mounting number of reports of deaths of foreign workers in Qatar increases pressure on the Gulf state and world soccer body FIFA to urgently address their security and working conditions. While the reports leave questions unanswered they also point to lax efforts to ensure that workers are not exploited by corrupt middle men and human resource managers and are mentally and physically prepared for work in high summer temperatures and often sub-standard conditions.

Pressure mounted this week with the first confirmation that high death rates are prevalent not only among Nepalese workers in Qatar – the focus of international trade unions and human rights groups until now – but also in other communities. The Indian embassy in Doha reported that more than 500 Indian workers had died in Qatar in the last two years. Indians account for 22% of the estimated 1.2 million workers in Qatar – a number that is expected to increase substantially as work begins on infrastructure exclusively related to the Gulf state’s hosting of the 2022 World Cup.

The Qatari committee responsible for delivery of stadiums and other World Cup-related infrastructure had hoped that its release last week of a 50 page document setting out standards for the living and working conditions of foreign workers would counter widespread criticism and repair significant reputational damage already suffered by the Gulf state. The International Labour Organization (ILO) and Amnesty International welcomed the document as a step forward but noted that there was much more that Qatar needed to do, including address the issue of its kafala or sponsorship system, which severely limits workers’ rights and makes them dependent on the whim of their employers.

The longer it takes Qatar to address fundamental issues, the more international criticism of its labour environment will fester, and the more difficult it will be for Qatar to achieve a key goal of its hosting of the World Cup and its overall investment in sports: the creation of the kind of soft power it needs to compensate for the fact that it will never have the hard power to defend itself.

Similarly, festering criticism will make it increasingly difficult for FIFA to argue that as a sports association it lacks the power to force Qatar to implement the kind of change trade unions and human rights groups are demanding. FIFA has so far insisted that depriving Qatar of its hosting rights is not an option. There is no guarantee that FIFA can maintain that position in the absence of fundamental change.

To be fair, Qatar has gone considerable length to address the issue by engaging with multilateral and non-governmental international organizations; setting improved standards for workers and looking at ways of cutting out corruption, abuse out of the migration cycle particularly in the recruitment phase; and ensuring proper adherence and policing of existing rules and regulations. The Qatari labour ministry said this week that it had significantly hiked its number of inspectors, had sanctioned 2,000 companies last year and another 500 since the beginning of this year for labour law violations and taken steps to improve workers’ access to healthcare and their ability to file complaints.

Yet there are steps Qatar could take even without addressing the kafala system as well as demands that workers have the right to freely organize and bargain collectively that could significantly alter the country’s political and social structure. These include making the standards for workers’ living and working conditions set out by the committee responsible for delivering World Cup infrastructure mandatory in Qatar as a whole.

So far, only the Qatar Supreme Committee for Delivery and Legacy and Qatar Foundation have issued updated workers’ charters. While these were drafted in close cooperation with the labour ministry, which has echoed in statements much of their language, those standards have yet to be formally adopted for the country as a whole fully  embedded in legislation.

Greater transparency would also help Qatar counter criticism. This would include detailing the kind of labour law infringements for which companies were sanctioned, what those sanctions entail and what steps are being taken to address the issue.

Given Qatar’s financial resources, it could take its efforts to rid the recruitment system of corruption by helping primarily Asian countries supplying labour prepare workers for employment in the Gulf state and ensure that they are physically and mental fit for working in harsh temperatures – a responsibility the supplier countries have failed to shoulder.

While the number of workers’ death reported so far is unacceptable and likely to rise, it remains unclear how many of those were work-related although that is likely to be a majority. Workers often do not have a precise understanding of the conditions they will be working in nor do they undergo a proper health check before their departure.

In addition, Qatar has yet to crack down on the practice of citing a heart condition for a workers’ death even if it involved a work-related incident because that entails less bureaucracy and allows companies and authorities to fend off investigations and post-mortems.

Recent high-profile cases of professionals, including soccer players, who were banned from leaving the country for lengthy periods of time because of labour disputes and the travails of an American family accused of responsibility for the death of their adopted daughter highlight not only problems associated with kafala but also with Qatar’s legal system as a whole.

Addressing these issues and taking further steps to improve workers’ conditions would help Qatar demonstrate that it is serious about change but will not make the issue of the kafala system or workers’ political rights go away. Qataris are divided with progressives seeing the World Cup hosting as an engine of social, if not political change, and conservatives fearing that Qatar’s system of an enlightened, secretive and opaque autocracy as well as the control of society by Qatari nationals who account for at best 15% of the population is at stake.

That is a discussion Qataris no longer can avoid even if they have yet to realize that the train has left the station. It is one that put the very nature of Qatari politics and society on the table and will resonate not only in Qatar but throughout the Gulf whose systems are similar.

James M. Dorsey is a Senior Fellow at the S. Rajaratnam School of International Studies (RSIS), Nanyang Technological University. He is also co-director of the University of Würzburg’s Institute for Fan Culture, and the author of The Turbulent World of Middle East Soccer blog and a forthcoming book with the same title.
FIFA Qatar