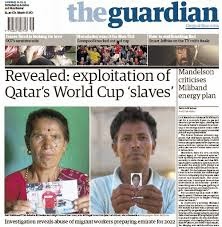 A perceived lack of real progress in the improvement of conditions for foreign labour, aggravated by a Qatari reluctance to engage in public debate beyond platitudes, is undermining the soft power goals underlying the Gulf state’s sports strategy.

The silver lining in the public relations beating Qatar is taking is that it forces international sports associations like FIFA, the world’s governing soccer body, to include issues of labour and other rights in their policy towards hosts of mega events like the 2022 World Cup. That was already evident last year when the International Olympics Committee (IOC) rejected Qatar’s bid to host the 2020 Olympics, in part, according to labour activists, because of workers’ material conditions.

FIFA, in its latest response to persistent media reporting on onerous living and working conditions of foreign workers who constitute a majority of the Gulf state’s population and are building vast infrastructure projects some of which are World Cup-related, demanded this week that Qatar report in its progress on improving living and working circumstances.

The report intended to inform testimony in mid-February in the European parliament by FIFA executive Theo Zwanziger, a former German Football Association head critical of the awarding of the World Cup to Qatar.  FIFA, whose executive committee is expected to take up the issue on March 20, needs to demonstrate that Qatar is making true on pledges to improve workers’ conditions and loft words embodied in a series of statements and charters.

“FIFA expects to receive information on the specific steps that Qatar has taken since FIFA President Blatter’s last trip to Doha in November 2013 to improve the welfare and living conditions of migrant workers,” FIFA said in a statement.

In response to a three-year old campaign by the International Trade Union Confederation (ITUC) and human rights groups as well as media reporting spearheaded by Britain’s The Guardian, Qatar has pledged to increase the number of inspectors overseeing the implementation of existing rules and regulations. These provisions are widely viewed as meeting international standards despite widespread criticism of the kafala or sponsorship system that significantly restricts workers’ freedom of movement and ability to change jobs.

Qatar has also drafted a number of charters of workers’ rights, the most ambitious of which is that of the Qatar Foundation that, according to people involved in its drafting, seeks to structurally alter a labourer’s migration cycle which involves corrupt middlemen and company human resource officers. The problem is the foundation has never published the charter nor reported on progress it has made in making the migration cycle less onerous.

FIFA’s request for a progress reports follows a report in The Guardian’s Sunday paper, The Observer, according to which 185 Nepalese construction workers died last year as a result of onerous labour conditions. That would bring the number of reported Nepalese deaths over the last two years to 382. Trade unionists have focused on the Nepalese community because it accounts for up to one quarter of Qatar’s two million inhabitants. Nepalese rank among the lowest paid workers in Qatar.

“We are currently in the middle of an intensive process, which is exclusively aimed at improving the situation of workers in Qatar. Ultimately, what we need are clear rules and steps that will build trust and ensure that the situation, which is unacceptable at the moment, improves in a sustainable manner,” Mr. Zwanziger said in a statement.

The public relations beating of Qatar stems from the Gulf state’s apparent inability to draw conclusions from a failed communications strategy ever since winning its World Cup bid. Qatar failed initially to anticipate the criticism of its success driven by questions about the integrity of its bid as well as envy and jealously by those who had unsuccessfully competed against it. It subsequently surrendered the public relations battlefields to its detractors by deciding not to engage in the false hope that criticism would eventually subside.

The result is not only that Qatar is on the defensive but that it has lost significant ground in achieving a core
goal of its vast investment in sports in general and soccer in particular: the projection of soft power in a bid to compensate for a lack of hard power. Soft power is a key Qatari defence and security strategy based on the realization that it will never have the military strength to defend itself irrespective of what hardware it acquires or the number of foreigners it recruits to populate its armed forces.

Sports is central to a soft power strategy designed to embed and endear Qatar in an international community in ways that would ensure that the world would come to its aid in times of need much like a US-led force expelled Iraqi occupation troops from Kuwait in 1990. Qatar has so far missed the plank with international public opinion associating it more with modern day slavery than with being a cutting edge 21st century nation that is contributing to the global good.

In an apparent decision to take more control of preparations of the World Cup, Qatar’s 33-year old emir, Sheikh Tamim Bin Hamid al Thani, a sports enthusiast and member of the IOC executive committee, downgraded the Supreme Committee that had so far been in charge of organizing the World Cup and created a new body chaired by himself and populated by his appointees to oversee event and operational planning as well as coordination with FIFA.

In many ways, Qatar, Nepal and other labour supplying countries have much to gain from working together to tackle workers’ material living and working conditions. Kanak Mani Dixit, a prominent Nepali journalist and editor of the Kathmandu-based Himal, recently argued that Nepalese authorities and civic groups were co-responsible by allowing abuse to occur.

“The job migrants of Nepal are entrapped not only by the sponsor-manpower nexus but by a neglectful Kathmandu civil society and a government that has floundered all these years when it comes to foreign affairs and the protection of overseas citizens. The Kathmandu discourse on migrant labour is marked by a sense of fatalism—the diffidence explained perhaps by a fear of shaking the honey pot. The Gulf migrants are perceived as the luckier ones, given that the poorest of all cross the open border into the employment sump that is India,” Mr. Dixit wrote.

“While there is little or no possibility of collective bargaining within the labour-receiving Gulf countries at this stage, the sending countries including Nepal—individually and collectively—could cooperate to demand better ‘migration governance’ in the GCC region. It is a delicate task that requires research, diplomatic skill and committed activism—so that the fundamental rights of the workers are protected without exposing Nepali workers to formal or informal bans (as happened with Filipina workers, when Manila sought to raise their base income),” Mr. Dixit said.

\“As a major labour exporter, Nepal must come out of the fog and get involved in the accelerating discourse. Priority in foreign affairs must be given to the relationships with the labour-receiving countries, especially those of the Gulf and Malaysia. We must rise from the wreckage of foreign affairs, including the appointment of incapable political-appointee ambassadors, which has directly hurt the prospects of citizens working overseas,” Mr. Dixit argued, calling for the creation of a ministry for foreign employment.