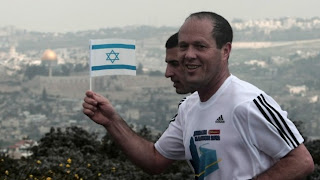 Arab youth and sports ministers announced this week a boycott of sports apparel manufacturer Adidas because of its sponsorship of last month’s Jerusalem marathon. The boycott comes at a time that Arab public displeasure is expanding from the West to China and Russia because of their support for the embattled regime of Syrian President Bashar al-Assad.

The announcement of the boycott by Saudi Prince Nawaf bin Faisal, chairman of the Arab council of youth and sports ministers, contrasted starkly with an analysis presented the same day by a prominent UAE intellectual that if a year ago Arabs were denouncing the United States for its support of Israel and Arab autocrats, today their anger was focused on China.

"All companies that have sponsored the marathon of Jerusalem, including Adidas, will be boycotted," Saudi Prince Nawaf said at the end of meeting of the council in Jeddah.
Adidas, the only non-Israeli sponsor, unsuccessfully tried to persuade the Jerusalem municipality to re-route the marathon to avoid occupied East Jerusalem after three city council members had complained to the German multi-national. That did little however to dissuade Arab ministers.

In fact, going beyond the boycott, Prince Nawaf said the council had also decided to organise a separate marathon next year in Arab cities entitled ‘Jerusalem is Ours’ to coincide with the annual Jerusalem event. "Israel is trying to misguide public opinion into believing that Jerusalem is its capital and that is a violation of all UN resolutions," Prince Nawaf said.

Prince Nawaf’s statement appeared to have an element of the pot talking to the kettle with the marathon’s slogan seemingly matching Israel’s claim to all of Jerusalem rather than to Arab countries’ long-standing endorsement of a peace plan that envisages Jerusalem as the capital of both Israel and Palestine with the east of the city serving as the administrative seat of the Palestinian state.

The council’s decisions reflect as much a deep-seated Arab stake in Jerusalem, Islam’s third most holy city, as it does an effort to by largely troubled regimes to garner public support at a time that a demand for far-reaching change is sweeping the Middle East and Africa for the past 16 months. The wave has already toppled the leaders of Egypt, Tunisia, Libya and Yemen and has pushed Syrian President Bashar al Assad to the brink.

Speaking at a symposium organized by the National University of Singapore’s Middle East Institute (MEI), Abdulkhaleq Abdulla, a prominent US-educated UAE University political scientist, cautioned that despite continued public Arab condemnation of US and Western support for Israel and contradictory policies towards the protest wave sweeping the Middle East and North Africa, China was for the first time seeing its flags burnt at demonstrations and calls for boycotts of Chinese goods echoing on social media.

At the root of public anger with China, a country that for years was respected for its support of the Palestinians and other liberation movements, is its dithering in Libya during last year’s NATO-backed rebellion that toppled Libyan leader Moammar Qaddafi, and even more so China’s refusal to back away from Mr. Assad, whose year-long bloody crackdown on anti-government protesters and rebels has already cost an estimated 9,000 lives.

Speaking at the same symposium Peking University Arabist Wu Bingbing identified the wave of protests in the Middle East and North Africa as a threat to Chinese interests alongside what he charged was a US concerted effort to secure its hegemony in the region. Mr. Bingbing avoided mentioning the crackdown in Syria but described Chinese-Russian cooperation, an apparent reference to the two countries’ vetoing of anti-Syrian resolutions in the United Nations Security Council, as strategic.

China has insisted its veto did not amount to supporting Mr. Assad and was intended to prevent the situation in Syria from worsening. While insisting that the battle in Syria was a domestic affair, China has since said it backs Arab League efforts to find a political solution despite military support for the anti-Assad rebels by key Arab states such as Saudi Arabia and Qatar, two of the People’s Republic’s key energy suppliers.

Mr. Abdulla suggested that at this point the growing anti-Chinese sentiment was unlikely to damage China’s economic interests despite Arab leaders publicly criticizing China as well as Russia for their vetoes of anti-Syrian resolutions in the United Nations Security Council. While that appears largely to be the case for the Gulf’s autocratic oil producers, China’s most important counterparts in the Middle East, that may not be the same for those nations such as oil producing Libya that have toppled their autocrats.

Saudi King Abdullah in widely reported blunt remarks in early February directed at China and Russia without mentioning them by name described their UN vetoes as “absolutely regrettable.” The king went on to say that “no matter how powerful, countries cannot rule the whole world. The world is ruled by brains by justice, by morals and by fairness.” An Arab League representative confronted senior Russian officials days later in in even blunter, undiplomatic terms during a heated debate behind-closed-doors.

China last year supported a Security Council resolution that imposed an arms embargo and other sanctions on the regime of Mr. Qaddafi, and endorsed referral of the regime’s crackdown to the International Criminal Court in The Hague but abstained from voting on a resolution that authorized international military intervention in Libya on humanitarian grounds.

At the same time, China attempted to straddle the fence by cultivating relations with both Mr. Qaddafi’s embattled regime and the rebels. That even-handed approach however didn’t prevent the rebels from threatening a commercial boycott, particularly after they found documents purporting to show that Chinese defence companies had discussed the supply of arms with Qaddafi operatives.

A Chinese Ministry of Commerce delegation visiting Libya in February failed to secure agreement on recovering at least some of the losses that China, Libya’s biggest foreign contractor, suffered with the evacuation last year of 35,000 Chinese workers who were servicing $18.8 billion worth of contracts.

James M. Dorsey is a senior fellow at the S. Rajaratnam School of International Studies at Nanyang Technological University in Singapore and the author of the blog, The Turbulent World of Middle East Soccer.
Arabs China Israel Palestine Saudi Arabia