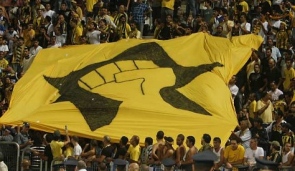 Militant supporters of storied but controversial Beitar Jerusalem Football Club known for their anti-Palestinian, anti-Ashkenazi Jewish attitudes harassed and beat a middle-aged Jewish woman who objected to their anti-Arab slogans in the second such attack in less than a month, according to Haaretz newspaper.

Contrary to last month’s assault by the Beitar fans on Palestinian shoppers and workers in a Jerusalem mall, police launched an immediate investigation. The Israeli police force was heavily criticized for failing to initially intervene or investigation the mall incident.

The attacks as well as the police’s laxity have outraged many Israelis and raised questions about the moral fiber of a society that tolerates such incidents as well as a soccer club that is unashamedly racist.

Jerusalem musician Reli Margalit was attacked after she objected to dozens of  Beitar fans chanting anti-Arab slogans as they marched on Sunday to Jerusalem’s Teddy Kollek Stadium for a match against Hapoel Acre that Beitar won 1:0.

"I heard cries of 'Death to the Arabs,' and since I was still incensed by the Malha Mall attack, I decided that I had to confront them now. I made a sign reading 'Down with Beitar's racism.' I believed that since I'm not a young woman and since I was alone, at worst it would come to curses, no more," Ms. Margalit told Haaretz.

Her assumption proved to be wrong. "Within seconds they surrounded me and started spitting at me. They took away my sign, and one of them - actually an older fan - hit me on the head with the pole of his flag. None of the fans protected me, and one girl showed up and tried to argue with me,” she said.

Police said they had escorted the militants for part of their march but had not heard racist slurs in the fans’ chants.

In a repeat of Beitar’s standard response to the racism of its most militant fans, spokesman Assaf Shaked said the team "cannot be responsible to all its supporters' actions."

Mounting Beitar fan aggression and violence is believed to stem from the growing influence among the club’s fans of a group known as La Familia that is dominated by supporters of Kach, the outlawed violent and racist party that was headed by assassinated Rabbi Meir Kahane. Beitar’s management has so far failed to stymie the group’s influence.

The incidents occurred in what City University of New York scholar Dov Waxman described in a recent article in The Middle East Journal as an atmosphere of escalating tension between Jews and Palestinians in Israel. “Attitudes on both sides have hardened, mutual distrust has intensified, fear has increased, and political opinion has become more militant and uncompromising….Jews and Palestinians are currently on a collision course, with potentially severe consequences for their continued peaceful co-existence, as well as for stability and democracy in Israel,” Mr. Waxman wrote.

The incidents further highlight the failure of the Israeli Football Association (IFA), the only soccer body in the Middle East and North Africa to have launched a campaign against racism and discrimination, to rein in the Beitar fans and curb the club’s submission to its supporters’ racist attitudes. With  the worst disciplinary record in Israel’s Premier League, Beitar has faced since 2005 more than 20 hearings and has received various punishments, including point deductions, fines and matches behind closed doors because of its fans’ racist behaviour.

Beitar is Israel’s only leading club never to have signed an Israeli Palestinian player because of fan pressure despite the fact that Palestinians are among the country’s top players. Maccabi Haifa striker Mohammed Ghadir recently put Beitar on the spot when he challenged the club to hire him despite its discriminatory hiring policies. The club refused on the grounds that its fans were not willing to accept a Palestinian player.

Beitar fans shocked Israelis several years ago when they refused to observe a moment of silence for assassinated Prime Minister Yitzhak Rabin, who initiated the first peace negotiations with the Palestinians.