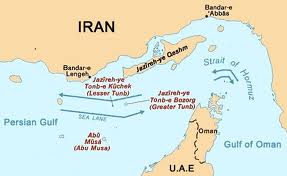 Increasingly strained relations between Iran and oil-rich Arab Gulf states spilled on to the soccer pitch this weekend with the United Arab Emirates cancelling a friendly match against the Islamic republic and recalling its ambassador in Tehran.

The move against the backdrop of a war of words between Iran and Qatar and a regional battle for influence with Saudi Arabia was in protest against  a controversial visit by Iranian president Mahmoud Ahmadinejad to two disputed islands in the Gulf 60 kilometres off the UAE coast, Greater and Lesser Tunbs. Iran occupied the two potentially oil-rich islands as well as a third one, Abu Musa, located near key shipping routes at the entrance to the Strait of Hormuz in 1971 on the eve of the formation of the UAE as an independent state. The visit was part of tour by Mr. Ahmadinejad of the Iranian Gulf coast. Iran has threatened to close the Strait of Hormuz if Israel or the United States were to attack its nuclear facilities.

The UAE foreign minister Sheikh Abdullah bin Zayed Al Nahayan denounced the visit as a "flagrant violation of the UAE's sovereignty'".  His ministry said the Gulf Cooperation Council (GCC) that groups Saudi Arabia, Qatar, Kuwait, the UAE, Bahrain and Oman would meet on Tuesday, the day the match was scheduled to be played, to discuss the Iranian president's visit. The UAE immediately after cancelling the soccer match withdrew its ambassador from Teheran.

Iranian soccer officials said they would file a protest against the cancellation of the match that with world governing soccer body FIIFA. They noted that Nigeria was ordered to pay $300,000 to the Iranian football federation after cancelling in 2010 a friendly against the Islamic republic on political grounds.

It is not immediately clear why Mr. Ahmadinejad chose to provoke the UAE at a moment that Iran is engaged in six-party talks about its nuclear program in a bid to weaken international sanctions and reduce the risk of an Israeli and/or US military strike. A second round of the talks which resumed in Istanbul this weekend for the first time in more than a year is scheduled for May 23 in Baghdad.

The UAE last year emerged in remarks made by its ambassador to the United States, Yousef al-Otaiba, as the first Gulf state to publicly endorse military force to prevent Iran from becoming a nuclear power, should peaceful efforts to resolve the standoff over Tehran’s nuclear program fail. The UAE at the time also restricted Iran’s use of Dubai to imports goods sanctioned by the United Nations and the United States. The ambassador's remarks reflected the Emirates' mounting frustration with Iran’s refusal to resolve the dispute over the islands.

Mr. Otaiba described a nuclear-armed Iran as the foremost threat to the UAE, and one that needed to be neutralized at whatever cost. His remarks suggested that in case of military action, the UAE would prefer a US to an Israeli strike because that was less likely to fuel popular anger, particularly among Shiites, at a time of widespread civil unrest in the Middle East and North AFRICA

Mr. Otaiba described the UAE as the country most threatened by Iran.  Contrasting the threat against the UAE with the danger a nuclear-armed Iran would pose to the US, Mr. Otaiba said that a nuclear Iran would “threaten the peace process, it will threaten balance of power, it will threaten everything else, but it will not threaten you. . . . Our military . . . wakes up, dreams, breathes, eats, sleeps the Iranian threat. It's the only conventional military threat our military plans for, trains for, equips for. . . . There's no country in the region that is a threat to the UAE [besides] Iran."

Satellite imagery last year revealed Iranian installations on Abu Musa that included three missile launch pads, an elaborate underground market, and a sports field with the words “Persian Gulf” emblazoned on it -- a provocative reminder of Iran’s hegemonic view of a region the Gulf states describe as the Arab Gulf.  UAE Foreign Minister Sheikh Zayed last year stopped short of comparing Iran’s occupation of the islands to Israel’s occupation of Palestinian territory. “Iran refuses to allow us to send teachers, doctors and nurses. I am not comparing Iran to Israel, but Iran should be more careful than others,” Sheikh Zayed said.

The UAE has worked to ensure that its security is closely linked to U.S. and European security interests. French President Nicolas Sarkozy last year inaugurated in Abu Dhabi France’s first military base in the region. The base, which comprises three sites on the banks of the Strait of Hormuz, houses a naval and air base as well as a training camp, and is home to 500 French troops. Alongside other smaller Gulf states, the UAE has further agreed to the deployment of U.S. anti-missile batteries on its territory. The UAE and Saudi Arabia are expected to spend up to $100 billion on arms procurement in the next five years.

With his remarks, Mr. Otaiba signalled further that the UAE was willing to pay a price for stopping Iranian nuclear proliferation, and could afford to do so now that Abu Dhabi had cemented its predominance among the UAE emirates following the financial crisis in Dubai.

“There will be backlash, and there will be problems with people protesting and rioting and [being] very unhappy that there is an outside force attacking a Muslim country,” Mr. Otaiba said. “That is going to happen no matter what.”

James M. Dorsey is a senior fellow at the S. Rajaratnam School of International Studies at Nanyang Technological University in Singapore and the author of the blog, The Turbulent World of Middle East Soccer.
FIFA Iran UAE