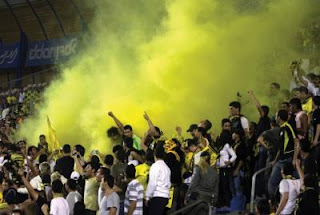 
Fan violence has sparked match cancellations on both sides of the Arab-Israeli divide.
The stakes for Egyptian and Israeli soccer fans are high – the nature of the society they want to live in and in some cases the very existence of some of their financially troubled clubs – even if the two groups are likely to agree on little more than their passion for the game.


For militant Egyptian soccer fans the battle is about securing the goals of last year’s popular uprising that toppled Egyptian president Hosni Mubarak, ending military rule and saving clubs from financial ruin as a result of initial suspension and ultimate cancellation of Egypt’s top two tournaments. A majority of Egyptian fans, who favor a more pro-Palestinian Egyptian foreign policy, have little empathy for their Israeli counterparts whom they see as thugs, many of whom are racists with their anti-Arab and anti-Muslim chants attitudes.
The Egyptian view is not unfounded even if leaders of the Egyptian ultras – militant, highly politicized, street battle-hardened fan groups modeled on similar organizations in Italy and Serbia – are struggling to keep their rank and file whose cry for dignity is often expressed in clashes with security forces under control.


Israeli soccer brawls over the past month ranged from pure hooliganism and violent clashes between players to attacks on Palestinians and more moderate Jews outside the confines of the stadium. Israeli Prime Minister Benjamin Netanyahu Sunday called for a crackdown on violence on the soccer field, after fighting broke out on Friday between players of Hapoel Ramat Gan and Bnei Lod. "If there's violence, there will not be soccer. We must uproot this violence in order to return to games that spectators can enjoy, myself among them,” Mr. Netanyahu told a cabinet meeting according to The Jerusalem Post.
The incident in Ramat Gan followed thousands of Hapoel Tel Aviv fans rioting on the pitch after their team lost to Maccabi Tel Aviv. A few days later, two fans of Maccabi Petach Tikvah attempted to attack a referee. In late March a Hapoel Haifa player was hospitalized after being headbutted by a Maccabi Petach Tikvah coach and then kicked in the head by a team associate. The two most onerous incidents involved militant anti-Arab fans of financially troubled Beitar Jerusalem, Mr. Netanyahu’s notorious club, in which supporters first attacked Palestinian workers and shoppers in a Jerusalem mall and later a Jewish woman who protested against their racist attitude. Police were severely criticized for failing to intervene in the mall attack.


The situation in nationalist Israel and post-Egypt could not be more different the laxity of the Israeli police notwithstanding. Yet, they are similar when it comes to the lack of political will on both sides of the Egyptian-Israeli divide to tackle soccer violence as well as governments’ failure to create an environment in which politically motivated violence is viewed as unacceptable. To be sure, the Israeli Football Association (IFA) has responded firmly to player violence but despite being the only soccer body in the Middle East and North Africa to have launched an anti-racist campaign has been lenient in meting out punishments for politically motivated violence.
The IFA last month significantly reduced Beitar's punishment for soccer violence from three home games out of town and one behind partly closed doors to on the grounds that the measure would not change fan behavior. With  the worst disciplinary record in Israel’s Premier League, Beitar has faced since 2005 more than 20 hearings and has received various punishments, including point deductions, fines and matches behind closed doors because of its fans’ racism.


Beitar’s matches often resemble a Middle Eastern battlefield. It’s mostly Sephardic fans of Middle Eastern and North African origin, revel in their status as the bad boys of Israeli soccer. Their dislike of Ashkenazi Jews of East European extraction rivals their disdain for Palestinians. Supported by Israeli right wing leaders, Beitar traces its roots to a revanchist Zionist youth movement. Its founding players actively resisted the pre-state British mandate authorities. Beitar is Israel’s only leading club never to have signed an Israeli Palestinian player because of fan pressure despite the fact that Palestinians are among the country’s top players.
By contrast, Egyptian teams already reeling from the cancellation of the Premier League in February following the death of 74 fans in a brawl in the Suez Canal city of Port Said fear financial disaster as a result of Sunday’s looming annulment of the Egypt Cup. The Egyptian Football Association (EFA) has appealed to the country’s military rulers, the Supreme Council of the Armed Forces (SCAF), to step in after a refusal by the interior ministry, which controls the police and the security forces. The refusal was prompted by the security forces’ reluctance to engage with deeply hostile, militant soccer fans because clashes would further damage their already tarnished image as the executioners of the former Mubarak regime and the military.


The military and the police have done little in the 14 months since Mubarak’s departure to polish the image of the security forces by projecting a willingness to reform the police, holding officers accountable for their actions and being seen to investigate the Port Said incident that allows the chips to fall where they fall. The trial against 61, people including fans and nine security officials, accused of responsibility for Port Said was suspended at its opening last week after disruptions by family and friends of the dead.
Police reform is a tough pill to swallow for the Egyptian military. The military “find themselves in a classic Catch-22 situation with regards to police reform. If they listen to the aspirations of the people and fully reform the police, they lose a valuable tool of state control. Should reform take place, where would the buck stop? Real reform in state institutions might later have personal ramifications for SCAF itself, as Egyptians are already calling for civilian control over the military, which may lead to investigations of the military junta down the line. On the other hand, should SCAF choose not to fully reform the police, they risk continued clashes with the people, who no longer fear the police - and consider it one of the last remaining bastions of the old regime,” said Adel Abdel Ghafar, a PhD scholar at the Australian National University and scion of a prominent Egyptian soccer figure, writing on Al Jazeera.com.


Granted, the Israeli police does not have the problems of their Egyptian counterpart. But if the stakes in Egypt are a more transparent, more accountable society, in Israel they are the very democracy that the Jewish state prides itself on, which increasingly is less based on tolerance and respect for diverging opinions and ethnic and religious minorities and ever more so on intolerance and the brutalizing effects of 45 years of occupation of Palestinian lands.
Violence in Israel is not limited to the soccer pitch. A senior Israeli military officer was celebrated by Israel’s right wing after attacking on camera a bicycle protester on the West Bank on camera in the same week as the Ramat Gan incident. Youths on a Tel Aviv beach taunted and abused a mentally disturbed woman inviting her to have sex with them.


The battles in Egypt and Israel are fought on multiple battlefields of which soccer is an important one. That puts the onus not only on governments but also on soccer associations, club management and last but not least world soccer body FIFA, which so far for all practical matters has looked the other way by at best issuing lame protests that Israelis and Egyptians can ignore because there is no price to pay.
With an inept military more concerned about its perks than the country’s future in charge in Egypt and an Israeli government that includes many Beitar Jerusalem supporters, little can be expected beyond at best demands for law enforcement from the highest authority in the country.

That means that the national soccer federations, FIFA and the regional associations, the Union of European Football Associations (UEFA) and the Confederation of African Football (CAF), more than ever need to step up to the plate.