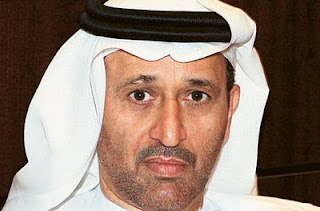 Yousef al Serkal (Source: Gulf News)
By James M. Dorsey
Asian Football Confederation (AFC) vice president Yousef Al Serkal, a former president of the United Arab Emirates soccer association, is lobbying Gulf countries to support him as the Arab consensus candidate to succeed suspended AFC president Mohammed Bin Hammam, a Qatari national, as head of the Asian body.
Mr. Al Serkal, hopes to capitalize on opposition to the ambition of Bahrain Football Association head Shaikh Salman Bin Ebrahim Al Khalifa to succeed Mr. Bin Hammam, who was fired in July as vice president of world soccer body FIFA on charges of bribery and suspended as AFC chief pending his appeal at the Court for Arbitration of Sport (CAS). Mr. Bin Hammam has denied any wrongdoing.
With Middle Eastern soccer managers confident that an Arab candidate has a good chance of succeeding Mr. Bin Hammam, Mr. Al Serkal, widely viewed as an associate of the disgraced Qatari national, is less controversial than Sheikh Salman, a member of the Gulf island’s royal family, who allegedly had a direct hand in the dismissal of some 150 sports executives and athletes, including three national soccer team players.
The executives and athletes are accused of participating in mass anti-government protests in Bahrain that were part of a series of popular revolts sweeping the Middle East and Africa. The revolts have already prompted the downfall of autocratic leaders in Egypt, Tunisia and Libya. Unlike in Syria, Yemen and Libya, Bahrain succeeded to squash the protests with brute force. Thousands were detained and some 30 people were killed.
The AFC decided in July to postpone replacing Mr. Bin Hammam, giving him until May next year at the latest to complete the appeal process. The issue is certain to be discussed at an AFC Executive Committee member in late November even if the council does not initiate the election process for a new leader at that meeting. Several non-Arab soccer managers, including acting AFC president Zhang Jilong of China, are also believed to be interested in the job.
"Basically, I am overlooking things on a day-to-day basis and internally we have managed to achieve a lot for our candidature. I am very clear about one thing, and that is the need for this part of Asia to have a consensus candidate rather than two contesting for the post of president. There has been an intention from Sheikh Salman and we need to ensure there is one candidate from the Gulf and Arab world for next year's elections," the Dubai-based Gulf News quoted Mr. Al Serkal as saying.
UAE Football Association president Mohammad Khalfan Al Rumaithi is so far the only Gulf soccer executive to have publicly endorsed Mr. Al Serkal’s candidacy.
The dismissed Bahraini national soccer team players and other athletes and sports officials are fighting in Bahrain courts charges brought against them for peacefully demonstrating. Sheikh Salman headed the committee that identified the 150 soccer players, athletes and sports executives.
National soccer team player Alaa Hubail who was charged together with his brother and co-team member Mohamed, recounted in September an interview with The Associated Press how he and his brother were arrested, abused and humiliated during the government’s brutal suppression of the protests.
Mohamed Hubail was tried by a Bahraini security court and convicted to two years in prison, but later released pending his appeal after FIFA questioned the BFA about the crackdown. Alaa’s case has yet to go to court.
Unlike other AFC and FIFA associates of Mr. Bin Hammam, Mr. Al Serkal has not been mired in allegations of violating codes of ethics.
Nonetheless, the AFC’s decision to postpone election of a successor to Mr. Bin Hammam was motivated by a desire to restructure the Asian soccer body to make it more democratic and transparent by rolling back changes that effectively concentrated power in the hands of its suspended president.
The restructuring is further intended to insulate Asian soccer from the corruption and match-fixing scandals that have engulfed world soccer body FIFA as well as the beautiful game in Asia, Europe, the Middle East and Africa and quell concern among fans and sponsors.
Reformers within the AFC caution that electing Sheikh Salman to succeed Mr. Bin Hammam would send the wrong signal, but have so far refrained from determining their attitude toward Mr. Al Serkal.
James M. Dorsey is a Senior Fellow at the S. Rajaratnam School of International Studies (RSIS), Nanyang Technological University and the author of the blog, The Turbulent World of Middle East Soccer
AFC Bahrain FIFA UAE