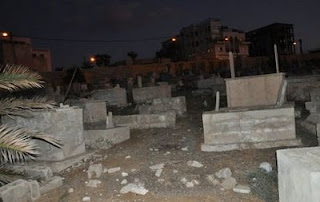 Vandalized cemetery (Photo: Jaffa 48 website)
By James M. Dorsey
Israeli police suspect militant right-wing Jewish soccer fans of painting slogans reminiscent of language used by Jewish settlers on buildings in the town of Bat Yam and Muslim and Christian graves in Jaffa, the formerly Palestinian part of Tel Aviv that today is home to both Israelis and Palestinians.
The slogans spray-painted on two buildings on Balfour Street in Bat Yam are believed to be the work of supporters of Israeli premier league team Maccabi Haifa, a club with a long slate of Palestinian players, Israeli police said.
The slogans asserted that "Maccabi Haifa doesn't want Arabs on the team," "Death to Arabs," and "Rabbi Kahane was right," a reference to the late leader of the outlawed extreme right-wing Jewish Defence League (JDL) who was assassinated in New York in 1990. The perpetrators signed the slogans as “Haifa supporters.”
The graffiti in Bat Yam was discovered a day after Christian and Muslim graves in Jaffa were desecrated with slogans calling for "Death to Arabs"  and containing the words "Price Tag," a term used by settlers as a threat to deter the government from uprooting Jewish settlements on the West Bank as part of a peace deal with the Palestinians. Supporters of the price-tag approach are believed to have recently attacked mosques as well as Jewish properties. Unidentified assailants last week torched a mosque in the northern town of Tuba Zangaria.
A police spokesman said that at least one slogan, "Death to Russians" was directed at non-Arabs.
Police said five tombs were smashed and another 20 desecrated.
Tension mounted further with the hurling Saturday, Yom Kippur, the holiest day in the Jewish calendar, of a Molotov cocktail at a Jaffa synagogue. The firebomb hit the roof of the synagogue, causing little damage and no injuries.
It was not immediately clear whether the hurling of the Molotov cocktail was in response to the desecration of the graves and an attack last week on a mosque in the Galilee.
In a statement, Maccabi Haifa said that it "vehemently condemns the violent actions against Muslims and Christians."
The club said that "Our club is proud to be the most popular club in Israel and in the Arab community in particular. We believe in coexistence and equality. Many of our players - in all the age groups - are Muslims, Christians and Druze, and we're very proud of that. We hope that the police will find these criminals. They aren't part of Maccabi Haifa. We call for tolerance, and together we will fight racism."
The club's largest fan organization, "The Green Monkeys," also issued a statement calling the actions "despicable and cowardly" and adding that "there's absolutely not a chance in the world that our organization has anything to do with such acts. We have nothing to do with these loathsome crimes."
Israeli Prime Minister Benjamin Netanyahu warned that Israel is "not prepared to tolerate any vandalism, especially that directed against religious sensitivities." and promised to prosecute the perpetrators to the "fullest extent of the law."
Israeli President Shimon Peres added that “the desecration of graves is a forbidden and criminal act that defames our honour and is contrary to the moral values of Israeli society.”
Local residents blamed the settlers for the desecration of the graves but a police spokesman told Ynetnews that there was no indication the suspects were settlers and that may be soccer hooligans
“All these extreme settlers are doing different activities and they are not paying a price for anything. Settlers have been saying that they want to bring the conflict inside (Israel) and this is exactly what they are doing now,” said Sami Abu-Shehadi, a member of the Tel Aviv-Jaffa municipality council.
The Israeli newspaper Haaretz commented in an editorial that “Imitating the ‘price-tag’ terrorists requires no special preparations or expertise; all you need is a little paint and a lot of racist chutzpah - a mixture of hatred of Arabs and bigotry against foreigners or immigrants - along with a bit of soccer-field rivalry.”
James M. Dorsey is a senior fellow at Nanyang Technological University's S. Rajaratnam School of International Studies in Singapore and the author of the blog, The Turbulent World of Middle East Soccer.
Israel Maccabi Haifa Palestinians