Libyan soccer club thrives on revolutionary zeal rather than training 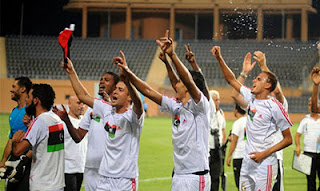 By James M. Dorsey
Libyan national soccer coach Marco Paqueta hasn’t been paid in six months. To prepare his team for this weekend’s crucial African qualifier against Zambia he had to buy his own ticket to return from his native Brazil to Libya in advance of the match.
Yet, despite rebel forces battling for control of Siirt, ousted Libyan leader Moammar Qaddafi’s hometown, and a lack of training in the past six months of civil war that racked the country and prompted suspension of its league, Mr. Paqueta believes his team is driven to win. To prepare for the match, the team has been training in Tunisia for the past ten days. Six of Mr. Paqueta’s players currently play for clubs in Tunisia.
“In their minds they are not only playing for football success but for a new government and a new country. Zambia are a big side with a lot more experience but I think we have much more motivation, especially now my players can see the target,” Mr. Paqueta said in an interview with Reuters.
Mr. Paqueta last month fielded his first post-Qaddafi team for a qualifier against Mozambique that it had to play behind closed doors in the Egyptian capital Cairo. The team ensured that Libya remained in the African running with its 1:0 defeat of Mozambique. It was the first time that the players wore and flew the rebel colors of red, black and green and lined up to the playing of the national anthem that Libya adopted prior to the 1969 military coup that brought Mr. Qaddafi to power.
Mr. Paqueta, who was appointed a year ago when Mr. Qaddafi was still in power, suggested that he was able for the first time to appoint his team without political interference. Most of the team that played in Cairo hailed from Benghazi, the eastern Libyan town from where the NATO-backed rebels waged their campaign against the Qaddafi regime.
He said his line-up against Zambia would include players who had previously been sidelined. “There were players who asked me why I have chosen some of the others from Tripoli but I have come here to work for the whole of Libya. I don’t care about who comes from where, as long as they want to win for the country,” Mr. Paqueta said.
“In Brazil everyone said I was crazy to try and stay in this job, but I want to go on and try and finish the task. I don’t want to just leave the players, I have a belief in the players, I’m a friend to them and I feel they also want to play for me,” he said.
With Mr. Qaddafi’s son, Al Saadi al Qaddafi, as head of the Libyan Football Association, soccer in Libya became a battlefield with fans resisting the regime’s efforts to manipulate the game.
Saadi’s association with soccer meant that the prestige of the regime was on the line whenever the national team played. As a result, soccer in Libya was as much a political match as it was a competition in which politics rather than performance often dictated the outcome. League matches were fixed to ensure that Tripoli’s Al Ahli club, which Saadi owened, remained on top to prevent a defeat on the pitch from being viewed as a defeat of the regime. At times, player’s names could not be mentioned in sports reporting for fear that they might become more popular than the Qaddafis.
Saadi, who is under house arrest in Niger, last week denied allegations of corruption and intimidation that prompted world police body Interpol to put him on the organization’s most wanted list.
Interpol said Saaid was being sought at the request of the rebel Transition National Council (TNC) "for allegedly misappropriating properties through force and armed intimidation when he headed the Libyan Football Federation."

It demanded that Al Saadi’s host country arrest him "with a view to returning him to Libya where an arrest warrant for him has been issued."
The world police body noted that Mr. Qaddafi’s 38-year old son had also been a military commander involved in the brutal crackdown on anti-government demonstrators that sparked the United Nations no-fly zone and NATO intervention. Interpol said that Al Saadi’s assets had been frozen by the UN and that he was subject to a travel ban by the world body.
James M. Dorsey is a senior fellow at Nanyang Technological University's S. Rajaratnam School of International Studies in Singapore and the author of the blog, The Turbulent World of Middle East Soccer.
African Cup Libya