Bahrain and Iran at loggerheads on and off the pitch 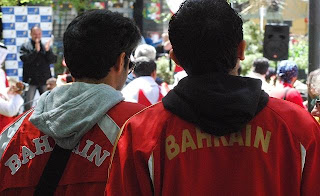 Bahrain to face off Iran ((Photo Courtesy New Zealand Scoop)
By James M. Dorsey
World soccer body FIFA has appointed a security expert to monitor next week’s politically loaded 2014 World Cup qualifier between Bahrain and Iran in the Iranian capital Teheran.
The October 11 match is scheduled take place amid continued tension in Bahrain in the wake of this year’s brutal crackdown on anti-government protesters. The protests pit a majority of the Gulf island’s dominant Shiite Muslims against its minority Sunni Muslim rulers.
Shiite Iran has repeatedly denounced the government crackdown as well as the presence of Saudi-led Gulf Cooperation Council (GCC) troops to bolster the Bahraini government.
FIFA said the security expert had been appointed because next week’s match was likely to be “high risk.”
Iranian protesters chanting “Death To Saudi” clashed with police earlier this year when Iran’s Piroozi club hosted Saudi club Al-Ittihad.
Iran’s Fars News Agency suggested next week’s match could produce similar scenes.
“Despite FIFA's concern about the security of this match, the fervent fans of the Iranian national team are highly expected to give a warm welcome to the Bahraini team and chant mottoes to show their full support for the Bahraini nation's quest for democracy and freedom,” the agency said.
Next week’s game is the first of two in the next month between the two teams who both expect to advance from Group E to the next stage of qualifiers. Iran and Bahrain share the lead in the group with four points from two games. The group also includes Qatar and Indonesia.
Dismissed Bahraini national players are fighting in courts charges brought against them for joining protesters earlier this year who were seeking greater political freedom, an end to discrimination against Shiite Muslims and more economic opportunity.

Some 150 soccer players, athletes and sports executives who had participated in the demonstrations were either arrested or fired from their positions. They were among thousands detained in the crackdown that left some 30 people dead.

Among the detained athletes were three national soccer team players, including brothers Alaa and Mohammed Hubail. Alaa last month recounted in an interview with The Associated Press how he and his brother were arrested, abused and humiliated during the government’s brutal suppression of the protests.
The loss of the Hubail brothers has affected the team’s performance. It failed to make it out of the group stage in this year’s Asian Cup and has fallen to 102nd in the FIFA world rankings.
Iran, in contrast, has seen its fortunes on the rise. After failing to qualify for the 2010 World Cup, the three-time World Cup qualifiers reached the quarterfinals of the Asian Cup in January and have risen in the rankings in the past year to 50th.
The arrests in Bahrain were part of a government sweep that targeted medics, government employees and activists, many of who said they were tortured while in detention.
Bahraini courts last week sentence 36 people, including 21 medics and two hand ball players, to prison terms of up to 15 years.

Mohamed Hubail was tried by a Bahraini security court and convicted to two years in prison, but later released pending his appeal after FIFA questioned the BFA about the crackdown.

Alaa’s case that has yet to go to court. He and the five other national team players have been barred from playing on the national team or in Bahrain’s domestic league.

A Bahraini court meanwhile sentenced Zulfiqar Naji, a 16-year old Iraqi footballer to a year in jail and deportation from the Gulf state, according to the boy's father, Iraqi club soccer coach, Abdelamir Naji. Zulfiqar was one of 19 people sentenced to one to five years in prison on Wednesday for participating in the protests.
"The sentence was a year in prison as well as deportation from Bahrain.  We have spoken to a lawyer in Bahrain, who is following up the case to start an appeal against the sentence. After sentencing, my son was moved to another prison where he will spend the rest of his sentence, after already spending six months in the first jail," Mr. Naji said.
He said his son had been training with the junior team of Bahrain’s Al-Mouharrak club. Mr. Naji played with Iraq's Al-Zawra club from 1978 to 1990 before coaching various clubs in Bahrain, including  Al-Mouharrak, Al-Itifaq, Al-Ittihad and Al-Badiyah.
The detention in April of Zulfiqar sparked angry demonstrations in Iraq and as far away as Canada calling for his release. It also prompted the Iraq government to make a plea to Bahrain on his behalf.
Relations between predominantly Shiite Iraq and Bahrain turned sour earlier this year because of Iraqi criticism of the government crackdown on the Gulf island. As a result, Bahraini airlines have stopped flying to Iraq.
By including athletes in the crackdown, Bahrain effectively shot itself in its foot. Like other Gulf states, Bahrain sees sports as a vehicle to project itself on to the world stage. It succeeded in attracting the region's first Formula One race, the Bahrain Grand Prix, and in becoming part of this year’s   Volvo Golf Champions European tours. Both events were however cancelled because of the protests.


James M. Dorsey is a senior fellow at the S. Rajaratnam School of International Studies at Nanyang Technological University in Singapore and the author of the blog, The Turbulent World of Middle East Soccer.