How football fuelled the Arab Spring

October 05, 2011
Few people can be unaware that 2011 has been a momentous year for the many Arab nations. Successful uprisings in Tunisia, Libya and Egypt, and ongoing conflicts in Bahrain, Syria, Yemen and elsewhere have made headlines across the world. Much less known, however, is the role played by football supporters in these popular revolutions. 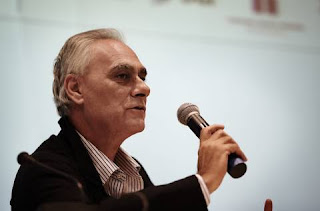 James M. Dorsey spoke about the role played by football supporters in uprisings in Egypt and elsewhere. Photo by Tine Harden

The story of the pivotal role played by football supporters in the Arab Spring was related to Play the Game by James M. Dorsey, an award-winning US journalist and Middle East expert.

The Egyptian revolution in particular was fuelled by an extraordinary truce between street-hardened supporters of Cairo’s two largest clubs, Al Ahli and Zamalek, Dorsey said. During the so-called Arab Spring, he pointed out, one of the first actions of incumbent governments was to adjourn national football competitions in an attempt to isolate the radical elements congregating on the stands and terraces.

Under repressive regimes across the Middle East, Dorsey pointed out, the only two outlets for releasing the pent up anger of disenfranchised young men and women were the mosques and the football stadiums. And while Arabic football fans do not resort to terrorist acts, he added, they are often keen to embrace violence.

While mosques have been portrayed as a focus of fundamentalist Islam, soccer stadiums have been battle grounds for other issues such as women’s rights, national rights, ethnic rights, and religious rights. A large number of soccer fans are highly politicised, especially in the Egyptian capital, Cairo, where many describe themselves as anarchists, Dorsey explained.

Nowhere in the Middle East is the rivalry more intense than in Cairo where Zamalek, a former British colonial club, is a bitter rival with the populist Al Ahly. Supporters of both clubs count a large number of what Dorsey called “battle-hardened street fighters” among their number. These “ultras” fight each other and the security forces on a regular basis.

While popular demonstrations were taking place in Cairo’s Tahrir Square earlier this year, Dorsey said, the masses and the youth organizations of the Moslem brotherhood were joined by a third group – Cairo’s soccer fans, who had agreed an unprecedented truce in order to express their opposition to the autocrats in elite positions of political power – which to many mirrored the situation in Egyptian football.

Many grassroots supporters, Dorsey added, were unenthusiastic about last month’s appointment of former US national coach Bob Bradley as the head of the Egyptian National Team. This team is still seen by numerous Egyptian supporters as “Mubarak’s team”, he said, and many fans “couldn’t care less” about Bradley’s appointment.