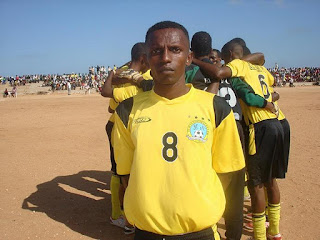 
The reports quoted relatives of Mr. Hussein as saying that Shabab militants told them Mr. Hussein had been “found guilty under Islam," but had given them no further details.
Relatives said Mr. Hussein travelled secretly to Mogadishu every day to attend training in advance of this month’s 2014 World Cup qualifier against Ethiopia.

Mr. Hussein's detentiom is a blow to efforts by Somalia, racked by civil war and famine, to attract soccer players and fan support from the country’s large Diaspora to rebuild shattered infrastructure in advance of its World Cup qualifiers.

The recruitment and fundraising campaign followed military setbacks in which the country’s Al Shabab lost their control of a majority of Mogadishu to forces of the Transition Federal Government backed by African Union peacekeepers.

The campaign took on special significance because Al Shabab has banned the game as un-Islamic in the chunks of Somalia that it controls. Somalia’s Under-20 soccer team suffered a serious setback in February when a militant Islamist suicide bomber killed one of its star internationals and wounded two other players.

Mogadishu’s stadium -- once one of East Africa’s most impressive filled with 70,000 passionate fans during games – was turned into an Islamist training and recruitment center while the jihadists controlled much of the city, reducing the transitional government’s writ to a few blocks around the presidential palace. Included in that writ was the country’s police academy where the national soccer team trained and played matches in mismatched attire on a forlorn patch of earth that is covered with mud, rocks and rusty cans in puddles, and has no goal posts.

The Somali Football Federation’s campaign constitutes a major advance in its battle with the jihadists for the hearts and minds of the country’s youth. A federation campaign supported by world soccer body FIFA and local businessmen successfully sought to lure child soldiers with the prospect of a soccer career away from the Islamist militia.

The campaign under the slogan ‘Put down the gun, pick up the ball’ challenged the jihadists’ ban on soccer that they enforced with militants in their trademark green jumpsuits and chequered scarves driving through towns in the south of the country in Toyota pickup trucks mounted with megaphones. Families were threatened with punishment if their children fail to enlist as fighters.
Boys were plucked from makeshift soccer fields. Childless families were ordered to pay al-Shabab
$50 a month, the equivalent of Somalia's monthly per capita income. Local soccer club owners were detained and tortured on charges of misguiding youth.

As part of its bid to rebuild infrastructure and prepare for the World Cup qualifiers, the federation appointed technical and administrative representatives in Europe and North America to promote and garner support for the Somali national team.

James M. Dorsey is a senior fellow at Nanyang Technological University's S. Rajaratnam School of International Studies in Singapore and the author of the blog, The Turbulent World of Middle East Soccer.