Remodelling the Belt and Road: Pakistan picks up the torch 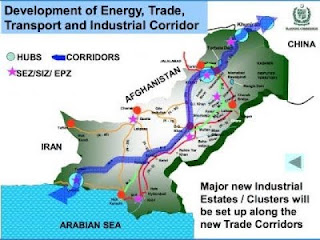 Pakistan, following in the footsteps of Malaysia and Myanmar, is the latest country to balk at the China and infrastructure focus of Beijing’s Belt and Road-related investments.

Preparing for his first visit to China as Pakistan’s prime minister, Imran Khan is insisting that the focus of the China Pakistan Economic Corridor (CPEC), a US$60 billion plus crown jewel of the Belt and Road, shift from infrastructure to agriculture, job creation and foreign investment.

“Earlier, the CPEC was only aimed at construction of motorways and highways, but now the prime  minister decided that it will be used to support the agriculture sector, create more jobs and attract other foreign countries like Saudi Arabia to invest in the country,” said information minister Fawad Chaudhry.

Mr. Khan’s determination to ensure that more benefits accrue to Pakistan from Chinese investment comes at a time that various Asian and African countries worry that Belt and Road-related investments in infrastructure risk trapping them in debt and forcing them to surrender control of critical national infrastructure, and in some cases media assets.

Mr. Khan’s move takes on added significance given that Pakistan appears to have decided to ask the International Monetary Fund (IMF) to help it avert a financial crisis with a loan of up to US$12 billion and discussions with Saudi Arabia that could produce up to US$10 billion in investments that would be separate but associated with CPEC.

Pakistani finance minister Asad Umar is expected later this week to initiate discussions with the IMF during the fund’s annual meeting in Bali. The decision was taken after Saudi Arabia refused to delay Pakistani payments for oil imports, opting instead to build a refinery and strategic oil reserve in the CPEC port of Gwadar.

Pakistani officials see investment by Saudi Arabia as one possible way of facilitating a Pakistani request to the IMF for help. They hope that even an informal association with CPEC of Saudi Arabia, one of the United States’ closest allies in the greater Middle East, may alleviate Washington’s concern that IMF money could be used to repay Chinese debt.

Yet, even that is unlikely to prevent the IMF, backed by the United States, from demanding that the veil of secrecy be lifted that shrouds the commercial and financial terms of many CPEC-related, Chinese-funded projects, as a pre-condition for assistance from the fund.

Mr. Lijian’s comments followed a statement last month by Chinese foreign minister Wang Ji after talks with Mr. Khan in Islamabad that appeared to indicate that China, while acknowledging Pakistani demands, would not address them immediately. Mr. Wang suggested that CPEC would only “gradually shift to industrial cooperation."

Indications suggest further that China may be looking to Pakistan’s military to shave off the rough ends of the government’s determination to effectively renegotiate CPEC.

Making his comments shortly after Mr. Wang’s departure from Islamabad, Mr. Dawood also asserted that the previous government had negotiated terms that were favourable to China rather than Pakistan.

China this week, in a move likely designed as much to strengthen Pakistani counter-terrorism capabilities as a gesture towards the country’s politically influential armed forces, made Pakistan the second country after Saudi Arabia to receive killer drones and the associated technology.

The US has refused to sell its more advanced killer drones to either Saudi Arabia or Pakistan.

The Khan government’s desire to refocus CPEC tackles key issues raised by critics of the project that potentially could impact China’s plan to pacify its troubled north-western province of Xinjiang through a combination of economic development and brutal repression and re-education of its Turkic Muslim population.

The initial plan for CPEC appeared to position Pakistan as a raw materials supplier for China, an export market for Chinese products and labour, and an experimental ground for the export of the surveillance state China is rolling out in Xinjiang.

The plan envisioned Chinese state-owned companies leasing thousands of hectares of agricultural land to set up “demonstration projects” in areas ranging from seed varieties to irrigation technology. Chinese agricultural companies would be offered “free capital and loans” from various Chinese ministries as well as the China Development Bank.

The plan envisaged the Xinjiang Production and Construction Corps introducing mechanization as well as new technologies in Pakistani livestock breeding, development of hybrid varieties, and precision irrigation. Pakistan effectively would become a raw materials supplier rather than an added-value producer, a prerequisite for a sustainable textiles industry.

The plan saw the Pakistani textile sector as a supplier of materials such as yarn and coarse cloth to textile manufacturers in Xinjiang. “China can make the most of the Pakistani market in cheap raw materials to develop the textiles & garments industry and help soak up surplus labour forces in (Xinjiang’s) Kashgar,” the plan said. Chinese companies would be offered preferential treatment with regard to “land, tax, logistics and services” as well as “enterprise income tax, tariff reduction and exemption and sales tax rate” incentives.

Similarly, Mr. Khan has yet to express an opinion on the plan’s incorporation of a full system of monitoring and surveillance that would be built in Pakistani cities to ensure law and order. The system would involve deployment of explosive detectors and scanners to “cover major roads, case-prone areas and crowded places…in urban areas to conduct real-time monitoring and 24-hour video recording.”

The surveillance aspect of the plan that identifies Pakistani politics, such as competing parties, religion, tribes, terrorists, and Western intervention” as well as security as the greatest risk to CPEC could, if unaddressed, transform Pakistani society in ways that go far beyond economic and infrastructure development.