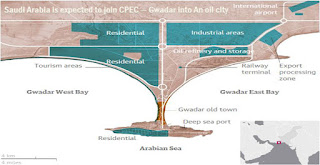 Desperate for funding to fend off a financial crisis fuelled in part by mounting debt to China, Pakistan is playing a complicated game of poker that could hand Saudi Arabia a strategic victory in its bitter feud with Iran at the People’s Republic’s expense.

The Pakistani moves threaten a key leg of the USD60 billion plus Chinese investment in the China Pakistan Economic Corridor (CPEC), a crown jewel of Chinese President Xi Jinping’s Belt and Road initiative.

They also could jeopardize Chinese hopes to create a second overland route to Iran, a key node in China’s transportation links to Europe. Finally, they grant Saudi Arabia a prominent place in the Chinese-funded port of Gwadar that would significantly weaken Iran’s ability to compete with its Indian-backed seaport of Chabahar.

Taken together, the moves risk dragging not only Pakistan but also China into the all but open war between Saudi Arabia and Iran.

Pakistan’s first move became evident in early September with the government’s failure to authorise disbursements for road projects, already hit by delays in Chinese approvals, that are part of CPEC’s Western route, linking the province of Balochistan with the troubled region of Xinjiang in north-western China.

In doing so, Pakistan implicitly targeted a key Chinese driver for CPEC: the pacification of Xinjiang’s Turkic Muslim population through a combination of economic development enhanced by trade and economic activity flowing through CPEC as well as brutal repression and mass re-education.

The combination of Pakistani and Chinese delays “has virtually brought progress work on the Western route to a standstill,” a Western diplomat in the Pakistani capital of Islamabad said.

Pakistani Railways Minister Sheikh Rashid, in a further bid to bring Pakistani government expenditure under control that at current rates could force the country to seek a $US 12 billion bailout from the International Monetary Fund (IMF), has cut $2 billion dollars from the US$8.2 billion budget to upgrade and expand Pakistan’s railway network, a key pillar of CPEC. Mr. Rashid plans to slash a further two billion dollars.

“Pakistan is a poor country that cannot afford (the) huge burden of the loans…. CPEC is like the backbone for Pakistan, but our eyes and ears are open,” Mr. Rashid said.

The budget cuts came on the back of Prime Minister Imran Khan’s Pakistan Tehreek-e-Insaf (PTI) party projecting CPEC prior to the July 25 election that swept him to power to as a modern-day equivalent of the British East India Company, which dominated the Indian subcontinent in the 19th century.

PTI criticism included denouncing Chinese-funded mass transit projects in three cities in Punjab as a squandering of funds that could have better been invested in social spending. PTI activists suggested that the projects had involved corrupt practices.

Pakistan’s final move was to invite Saudi Arabia to build a refinery in Gwadar and invest in Balochistan mining. Chinese questioning of Pakistan’s move was evident when the Pakistani government backed off suggestions that Saudi Arabia would become part of CPEC.

Senior Saudi officials this week visited Islamabad and Gwadar to discuss the deal that would also involve deferred payments on Saudi oil supplies to Pakistan and create a strategic oil reserve close to Iran’s border.

"The incumbent government is bringing Saudi Arabia closer to Gwadar. In other words, the hardline Sunni-Wahhabi state would be closer than ever to the Iranian border. This is likely to infuriate Tehran," said Baloch politician and former Pakistani ports and shipping minister Mir Hasil Khan Bizenjo.

Pakistan’s game of poker amounts to a risky gamble that serves Pakistani and Saudi purposes, puts China whose prestige and treasure are on the line in a difficult spot, could perilously spark tension along the Pakistan-Iran border, and is likely to provoke Iranian counter moves. It also risks putting Pakistan, Saudi Arabia and Iran, who depend on China economically in different ways, in an awkward position.

The Saudi engagement promises up to US$10 billion in investments as well as balance of payments relief. It potentially could ease US concerns that a possible IMF bailout would help Pakistan service debt to China.

A refinery and strategic oil reserve in Gwadar would serve Saudi Arabia’s goal of preventing Chabahar, the Indian-backed Iranian port, from emerging as a powerful Arabian Sea hub at a time that the United States is imposing sanctions designed to choke off Iranian oil exports.

A Saudi think tank, the International Institute for Iranian Studies, previously known as the Arabian Gulf Centre for Iranian Studies (AGCIS) that is believed to be backed by Saudi Crown Prince Mohammed bin Salman, argued last year in a study that Chabahar posed “a direct threat to the Arab Gulf states” that called for “immediate counter measures.”

Written by Mohammed Hassan Husseinbor, an Iranian political researcher of Baloch origin, the study warned that Chabahar would enable Iran to increase its oil market share in India at the expense of Saudi Arabia, raise foreign investment in the Islamic republic, increase government revenues, and allow Iran to project power in the Gulf and the Indian Ocean.

Mr. Husseinbor suggested that Saudi support for a low-level Baloch insurgency in Iran could serve as a countermeasure. “Saudis could persuade Pakistan to soften its opposition to any potential Saudi support for the Iranian Baluch... The Arab-Baluch alliance is deeply rooted in the history of the Gulf region and their opposition to Persian domination,” Mr. Husseinbor said.

Noting the vast expanses of Iran’s Sistan and Baluchestan Province, Mr. Husseinbor went on to say that “it would be a formidable challenge, if not impossible, for the Iranian government to protect such long distances and secure Chabahar in the face of widespread Baluch opposition, particularly if this opposition is supported by Iran’s regional adversaries and world powers.”

Saudi militants reported at the time the study was published that funds from the kingdom were flowing into anti-Shiite, anti-Iranian Sunni Muslim ultra-conservative madrassas or religious seminaries in Balochistan.

US President Donald J. Trump’s national security advisor, John Bolton, last year before assuming office, drafted at the request of Mr. Trump’s then strategic advisor, Steve Bannon, a plan that envisioned US support “for the democratic Iranian opposition,” including in Balochistan and Iran’s Sistan and Balochistan province.

All of this does not bode well for CPEC. China may be able to accommodate Pakistan by improving commercial terms for CPEC-related projects and Pakistani debt as well as easing Pakistani access to the Chinese market. China, however, is likely to find it far more difficult to prevent the Saudi-Iranian rivalry from spinning out of control in its backyard.