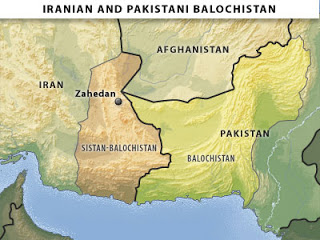 Iran, in the latest of a series of incidents on its western and south-eastern borders, said it had disbanded a Pakistan-based cell of ant-Shiite militants in a clash this week on the Iranian side of the border.

The clash, shrouded in mystery like similar past incidents in the ethnic Baloch province of Sistan and Baluchistan and Kurdish areas in the West, occurred amid mounting speculation that the Trump administration, backed by Saudi Arabia and Israel, is striving for regime change in Tehran.

Iran and Jaish-al-Adl (the Army of Justice), a splinter group that traces its roots to Saudi-backed anti-Shiite groups in Iran, issued contradictory statements about the incident. Iran said three militants and two of its Revolutionary Guards were killed in the incident. Jaish-al-Adl claimed it had killed 11 Guards while suffering no losses.

US and Israeli officials insist that their anti-Iranian moves aim to increase domestic pressure on Iran to change its policies at a time that the country is witnessing multiple protests related to economic policies and water shortages rather than at regime change.

US and Israeli officials, including Secretary of State Mike Pompeo and Prime Minister Benyamin Netanyahu, have resorted to social media to support the protests.

At the same time, debate within the Trump administration pits proponents of regime change like national security advisor John Bolton, backed by Mr. Netanyahu, against those that believe that domestic pressure is pushing the Iranian regime to the brink and simply needs a degree of encouragement.

In a series of tweets, Mr. Pompeo supported Iranian protesters and charged that “Iran’s corrupt regime is wasting the country’s resources on Assad, Hezbollah, Hamas & Houthis, while Iranians struggle.”

Mr. Pompeo’s comments were echoed in one of several video clips by Mr. Netanyahu, celebrating the brilliance of Iranians and their achievements in technology. “So why is Iran so poor? Why is unemployment so rampant? The answer is in two words: the regime. Iran’s dictators plunder the country’s wealth… The Iranian people are the ones that suffer,” Mr. Netanyahu said.

The messages appeared to be the result of a joint US-Israeli working plan drafted late last year to counter Iran with covert as well as diplomatic actions.

A participant before joining the Trump administration, Mr. Bolton this year stayed away from an annual gathering in Paris of the Mujahedeen-e-Khalq, a controversial Iranian opposition group that since being dropped from US, Canadian and European terrorism lists has garnered significant support in Western political, military and security circles.

There is widespread doubt that the Mujahedeen, that advocates the armed overthrow of the Iranian regime, commands popular support in Iran.

That did not stop President Trump’s personal lawyer, Rudolph Giuliani, and former House of Representatives speaker and Trump ally, Newt Gingrich from attending alongside former US officials, former Canadian Prime Minister Stephen Harper and European politicians. The US State Department said the Americans were not representing the administration.

“This president does not intend to turn his back on freedom fighters… When the greatest economic power stops doing business with you, then you collapse ... and the sanctions will become greater, greater and greater,” Mr. Giuliani told the rally.

The recent clash with militants as well as the rally occurred as Iranian President Hasan Rouhani was visiting Europe to shore up support for the 2015 international nuclear agreement that has been in jeopardy since Mr. Trump withdrew the United States from the accord in May and re-imposed sanctions on the Islamic republic that would affect non-European entities that continue to do business with it. Europe, Russia and China have vowed to honour the agreement.

In a mysterious twist, German, Belgian and French authorities arrested an Iranian diplomat, a couple of Iranian descent, and three suspected accomplices on suspicion of planning to bomb the Mujahedeen’s Paris rally.

It was not clear why Iran would want to jeopardize Mr. Rouhani’s trip as well as international support for the nuclear deal by bombing a group that has little domestic support unless Iranian hardliners saw it as a way of further weakening the reformist president.

“How convenient: Just as we embark on a presidential visit to Europe, an alleged Iranian operation and its ‘plotters’ arrested. Iran unequivocally condemns all violence & terror anywhere and is ready to work with all concerned to uncover what is a sinister false flag ploy,” tweeted Iranian foreign minister Javid Zarif.

With little known about the most recent clash and earlier incidents, it remains difficult to establish whether there is a pattern even though circumstantial evidence suggests it is a possibility.

Saudi Arabia’s powerful crown prince, Mohammed bin Salman vowed last year that the battle between his kingdom and the Islamic republic would be fought "inside Iran, not in Saudi Arabia."

Former Saudi intelligence chief and ambassador to Britain and the United States, Prince Turki al-Faisal, who is believed to often air views held by Prince Mohammed, shined, like Mr. Bolton, with his absence at this year’s Mujahedeen gathering but told the group in preceding years that “I, too, want the fall of the regime.”

A Saudi think tank, the Arabian Gulf Centre for Iranian Studies (AGCIS), believed to be backed by Prince Mohammed, that has since rebranded itself as the International Institute for Iranian Studies, called last year in a study for Saudi support for a low-level Baloch insurgency in Iran. There is no solid evidence that the plan has been translated into policy.

In the study, Mohammed Hassan Husseinbor, a Washington-based Baloch lawyer, researcher and activist, argued that the “Saudis could persuade Pakistan to soften its opposition to any potential Saudi support for the Iranian Baluch... The Arab-Baluch alliance is deeply rooted in the history of the Gulf region and their opposition to Persian domination,” Mr. Husseinbor said.

Pointing to the vast expanses of Sistan and Baluchestan, Mr. Husseinbor went on to say that “it would be a formidable challenge, if not impossible, for the Iranian government to protect such long distances…in the face of widespread Baluch opposition, particularly if this opposition is supported by Iran’s regional adversaries and world powers.”

Pakistani militants have claimed that Saudi Arabia in the last year stepped up funding of militant madrassas or religious seminaries in Balochistan that allegedly serve as havens for anti-Iranian fighters.

Said Iran scholar Ahmad Majidyar: “Iran’s south-eastern and north-western regions – home to marginalized ethnic and religious minorities – have seen an uptick in violence by separatist and militant groups… Sistan and Baluchestan can be a breeding ground for local militant and separatist movements as well regional and international terrorist groups.”