Playing politics with religion: Imran Khan puts himself between a rock and a hard place 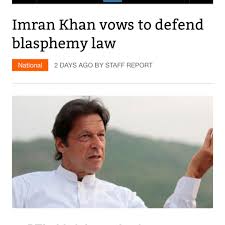 Less than a week in office, Pakistani Prime Minister Imran Khan has made blasphemy one of his first issues, empowering militants and initiating international moves, long heralded by Saudi Arabia, that would restrict press freedom by pushing for a global ban.

Mr. Khan, in his first address as prime minister to the Pakistani Senate, said he intended to raise the blasphemy issue in the United Nations and would work to achieve a common stand within the 57-nation Organization of Islamic Cooperation (OIC).

Mr. Khan spoke after the Senate adopted a resolution condemning a plan by Geert Wilders, a militantly Islamophobic, far-right Dutch opposition leader, who heads the second largest faction in parliament, to hold a competition for cartoons about the Prophet Mohammed. Many Muslims see visual depictions of the prophet as blasphemy.

The Pakistani campaign against the planned Dutch competition echoes a Muslim boycott more than a decade ago of Danish goods and protests across the Muslim world in response to publication of cartoons in a Danish newspaper that depicted the Prophet Mohammed unfavourably.

Dutch Prime Minister Mark Rutte denounced Mr. Wilder’s plan as “not respectful” and “provocative” but provoked Pakistani ire by refusing to ban the competition on the grounds that he would not curtail freedom of speech.

Mr. Khan’s newly appointed human rights minister, Shireen Mazari, a controversial academic, who two decades ago advocated nuclear strikes against Indian population centres in the event of a war, set the tone by condemning on her first day in office Mr. Rutte’s decision.

Ms. Shirazi’s move bolstered plans by Tehreek-i-Labbaik Pakistan (TLP) to launch a "decisive march" from Lahore to Islamabad and "stay on the streets until either the publication of blasphemous cartoons in the Netherlands end or the government immediately ends diplomatic ties with the Dutch."

TLP also called on Mr. Khan to demand that Islamic nations together with Pakistan break off diplomatic relations with the Netherlands in protest against the planned cartoon competition.

The TLP propelled itself into prominence when it last year blocked key roads in Islamabad for weeks with seemingly tacit military approval in demand of the resignation of the then justice minister, claiming that he had weakened the principle of Khatam-i-Nabuwwat, or the finality of Mohammed’s prophethood, that resonates strongly among many Pakistanis.

TLP, exploiting what governance expert Rashid Chaudhry dubbed “the politics of emotion,” emerged from the election as Pakistan’s fifth largest party even if it failed to win a seat in the country’s national assembly. The party campaigned on a platform calling for strict implementation of Islamic law as well as Pakistan’s draconic blasphemy law.

Mr. Khan, who has condemned killings in the name of religion, has echoed TLP’s insistence on the principle of Khatam-i-Nabuwwat and anti-blasphemy stance. “We are standing with Article 295c and will defend it,” Khan said referring to a clause in the constitution that mandates the death penalty for any “imputation, insinuation or innuendo” against the Prophet Muhammad.

Mr. Khan’s backing of the blasphemy clause that has served as a ramming rod against minorities and a means to whip crowds into a frenzy and at times turn them into lynch mobs and inspired vigilante killings came as no surprise to South Asia scholar Ahsan I. Butt, who noted shortly after the election that “Khan’s ideology and beliefs on a host of dimensions are indistinguishable from the religious hard-right.”

By prioritizing blasphemy in his first week in office, Mr. Khan was catering to a widely held anti-blasphemy sentiment among Pakistanis as well as Saudi Arabia that has been quietly campaigning for more than decade for a global law that would punish blasphemy.

Mr. Khan’s move comes at a moment that Pakistan is walking a fine line in the bitter rivalry between Saudi Arabia and Iran with whom Pakistan, home to the world’s largest Shiite Muslim minority, shares a border.

Saudi Arabia has called on Mr. Khan to step up support for the 41-nation, Saudi-led Islamic Military Counter-Terrorism Coalition, that is widely seen as an anti-Iranian alliance.
Pakistan reluctantly allowed retired Pakistani general Raheel Sharif to take command of the coalition in 2017. Pakistan has camouflaged its reluctance to be drawn into the Saudi-Iranian rivalry by repeatedly insisting that it would do what is needed to protect Islam’s most holy sites in the kingdom.

Diplomatic sources suggest that Saudi financial support for Pakistan, enmeshed in a financial crisis that is likely to force it to turn for the 13th time in three decades to the International Monetary Fund (IMF), could depend on the degree to which Mr. Khan bends to the kingdom’s will. The Saudi-backed Islamic Development Bank reportedly would be willing to lend Pakistan US$ 4 billion.
Saudi Crown Prince Mohammad bin Salman is believed to have raised the issue last week with Pakistan Chief of Army Staff General Qamar Javed Bajwa, who was last week in the kingdom to perform the haj.

Saudi efforts to exploit Pakistan’s precarious financial position early in Mr. Khan’s prime ministership stem not only from Pakistan’s urgent need for assistance but also uncertainty on what Saudi-Pakistani relations will be.

Unlike, ousted former prime minister Nawaz Sharif, who maintained close personal and commercial ties to the kingdom’s ruling family, Mr. Khan is less beholden to the Saudis even if he shares much of their ultra-conservatism.

Saudi Arabia arranged for Mr. Sharif and his family to go into exile in 1999 after his then government was toppled in a military coup that brought General Pervez Musharraf to power.

“Imran Khan doesn’t feel personally obliged towards the Saudis, who have long bought Pakistan and considered it their satellite state. If there’s anything that could push his hand it’s the economic support provided by Riyadh, given Pakistan’s fiscal needs,” said Shameem Akhtar, a veteran foreign policy analyst, columnist and former dean of International Relations at Karachi University.

If successful in his campaign for a global law banning blasphemy, Mr. Khan will put himself, Pakistan and Islamic countries that join him in his effort in a precarious position. It would likely open him his country and the Muslim world to criticism of their silence about China’s crackdown in the north-western province of Xinjiang on Uyghur Muslims that arguably amounts to one of the most concerted attacks on Islam in recent history.

"Many Middle Eastern states have a poor human rights record themselves — including when it comes to the treatment of religious minorities. Many exhibit a similar understanding of human rights to China's — that is, that social stability trumps individual rights. This is how the Chinese government has framed the presence of re-education camps and other repressive measures,” said Chinese politics scholar Simone van Nieuwenhuizen.

Many Muslim nations, targets of significant Chinese investment, beneficiaries of trade, and in some case heavily indebted to China, feel they cannot afford to put their economic ties to the People’s Republic in jeopardy.

Ultimately, that however could put Muslim leaders, including Mr. Khan, between a rock and a hard place. They often seek to bolster their domestic and international positions by burnishing their religious credentials. Doing so while turning a blind eye to developments in China eventually could catch up with them.