Pressuring China to take sides, the boycott move complicates its efforts to tiptoe through the minefield of Middle Eastern rivalries by maintaining good relations with all parties
BY JAMES M. DORSEY
5 JUN 2017
31 SHARE 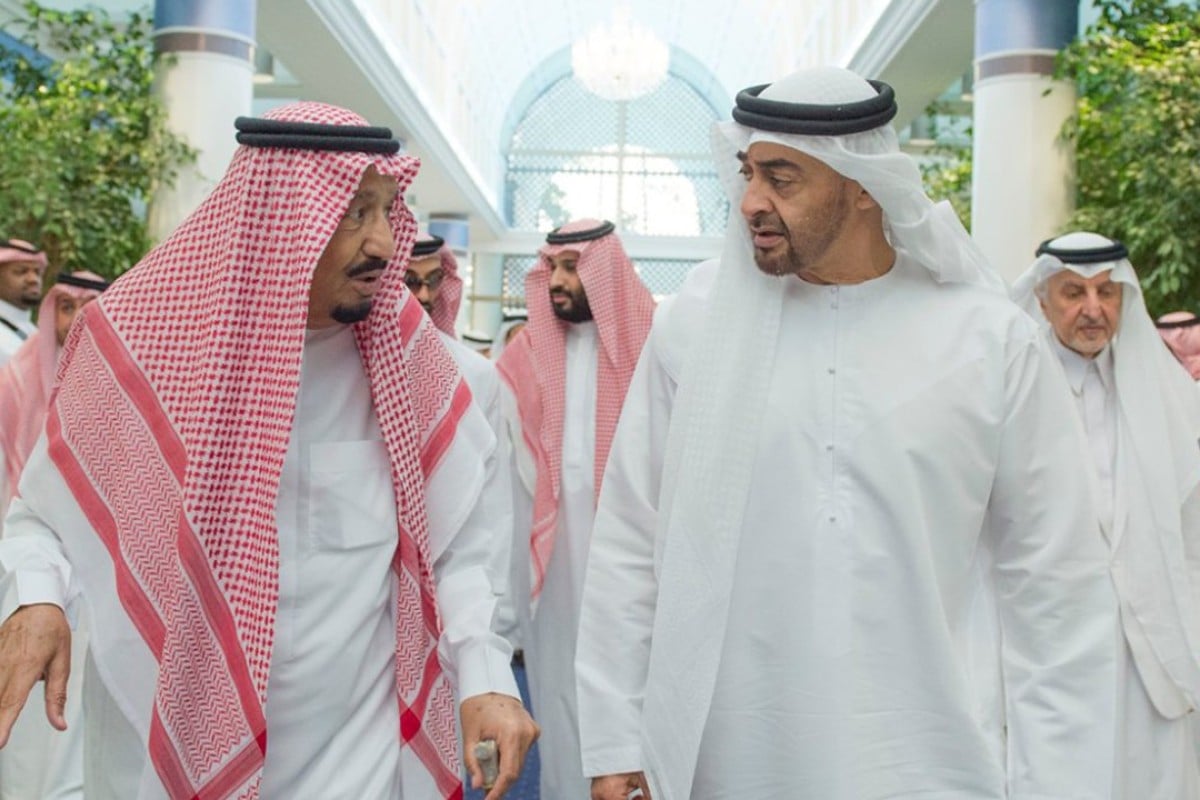 Saudi King Salman bin Abdulaziz Al Saud, left, talks to Sheikh Mohammed bin Zayed Al Nahyan, Abu Dhabi's Crown Prince and Deputy Commander in Chief of the Emirates Armed Forces in Jiddah, Saudi Arabia. Photo: AP
A Saudi and UAE-driven campaign to isolate Qatar, and by extension Iran, puts non-Arab Muslim states and China in a bind and tests the degree of Saudi soft power garnered in decades of massive spending on the propagation of anti-Iranian, anti-Shiite Sunni Muslim ultra-conservatism.
The Saudi-UAE campaign, building on an increasingly vicious cyber and media war against Qatar, kicked into high gear on Monday, with the kingdom, the Emirates, Bahrain and Egypt breaking off diplomatic relations and cutting air and sea traffic with Qatar, and a 41-nation Saudi-led, Pakistani-commanded military alliance suspending Qatar’s participation in operations in Yemen.

The four Arab countries announced their move in similar statements. In its statement, Bahrain blamed Qatar’s “media incitement, support for armed terrorist activities and funding linked to Iranian groups to carry out sabotage and spreading chaos in Bahrain” for its decision.
Bahrain, a majority Shiite nation ruled by a Sunni minority, has blamed Iran for a popular uprising in 2011 that it brutally squashed with the help of Saudi troops, and for subsequent intermittent protests and violence.
The Saudi-UAE campaign is reminiscent of a similar failed effort by Gulf states in 2014, but this time round sets the bar far higher: it aims to force non-Arab states to take sides in a four-decades-old proxy war between Saudi Arabia and Iran that has escalated in recent years and persuade the Trump administration to come down hard on Qatar because of its refusal to join the anti-Iranian Saudi bandwagon and its ties to Islamist and militant groups. 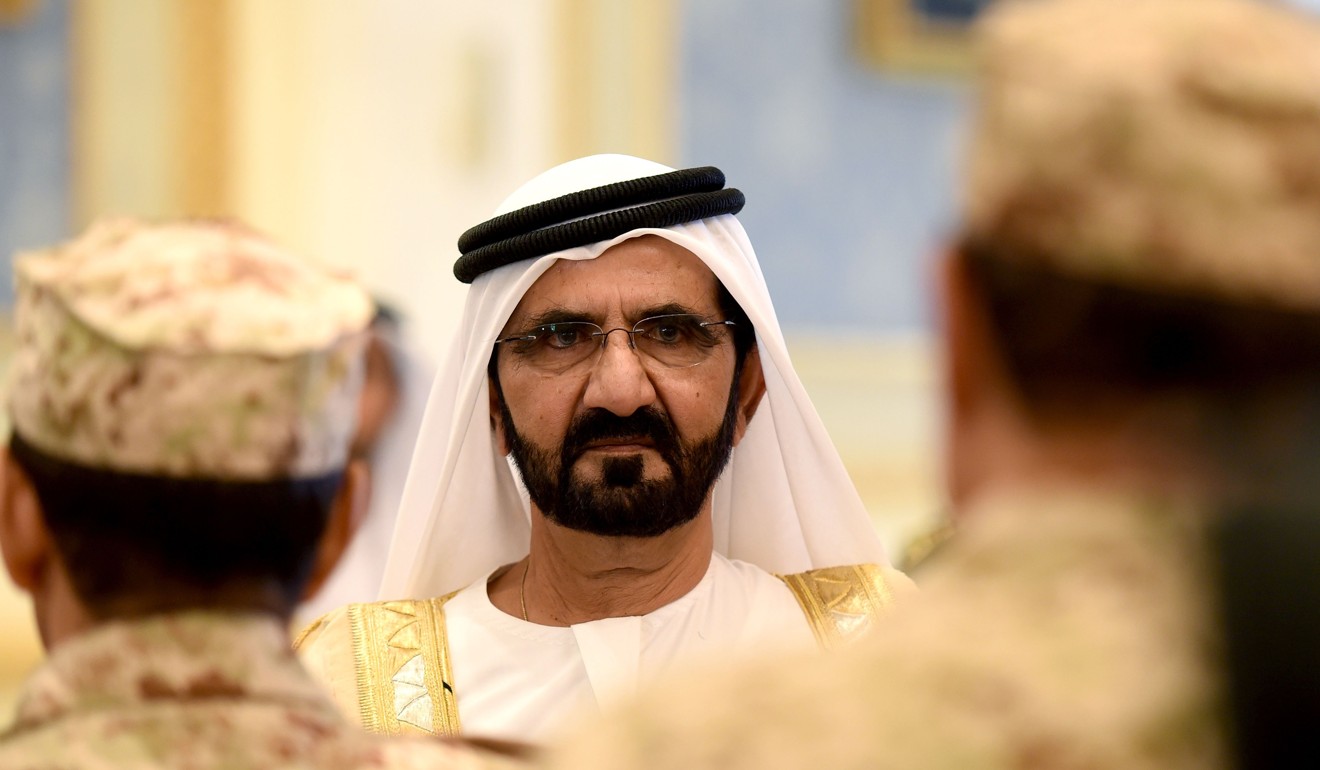 Prime Minister of the United Arab Emirates (UAE) and ruler of Dubai, Sheikh Mohammed bin Rashid al-Maktoum. Photo: AFP
It also pressures China to take sides, complicates its effort to tiptoe through the minefield of Middle Eastern conflicts and rivalries by maintaining good relations with all parties, and threatens its Belt and Road Initiative with the likely expansion of the Saudi-Iranian proxy war into Balochistan, a key Pakistani node of the plan.
The rupture and military suspension could also complicate Chinese efforts to keep its Middle East policy in sync with that of the United States, the major power in the region, if Washington were to side with Saudi Arabia and the UAE.
US Secretary of State Rex Tillerson, speaking on the sidelines of a bilateral meeting with Australian officials in Sydney that was also attended by Defence Secretary James Mattis, appeared to express implicit support for the Saudi-UAE-led move.
“I think what we’re witnessing is a growing list of some irritants in the region that have been there for some time. And obviously they have now bubbled up to a level that countries decided they needed to take action in an effort to have those differences addressed,” Tillerson said.

Tillerson’s remarks came amid debate in Washington about possibly stepping up pressure on Qatar to break its ties with groups like the Muslim Brotherhood and Hamas, which controls the Gaza Strip, and crack down on alleged funders of political violence who have been designated global terrorists by the US Treasury and are resident in the Gulf state.
Robert Gates, a former US defence secretary and director of CIA, warned last week at a Foundation for the Defense of Democracies gathering in Washington on Qatar and the Brotherhood that Qatar risked losing its hosting of US forces if it failed to revise its policies. “The United States military doesn’t have any irreplaceable facility,” Gates said.
Ed Royce, the Republican chair of the House Foreign Affairs committee, told the same gathering that “if it doesn’t change, Qatar will be sanctioned under a new bill I’m introducing to punish Hamas backers”, a reference to Qatari support for the Islamist group that controls the Gaza Strip. King Salman bin Abdulaziz al-Saud of Saudi Arabia. Photo: EPA
The two men were speaking as the media and cyberwar erupted with Qatari claims that several of its media websites had been hacked with a fake report attributing comments to Qatari emir Sheikh Tamim bin Hamad Al Thani that were in line with the Gulf state’s policy but that Qatar says he did not make.
The US Federal Bureau of Investigation (FBI) is helping Qatar investigate the alleged hack.
In a leaked email, UAE ambassador to the United States Yousef Al-Otaiba told Gates on the eve of his appearance at the Foundation gathering that “MBZ (UAE Deputy Crown Prince Mohammed bin Zayed sends his best from Abu Dhabi” and “he says ‘give them hell tomorrow’.”

Al-Otaiba was responding to an email in which Gates said that his appearance gave him a chance “to put some folks on notice”.
Scores of Muslim nations signed up for a military alliance created in 2015 by Saudi Deputy Crown Prince Mohammed bin Salman, initially to support the kingdom’s military intervention in Yemen. The alliance’s purpose was reformulated to counter political violence when it became clear that many Muslim nations, including Malaysia, Indonesia, and Pakistan, were reluctant to become embroiled in what has become for the kingdom a fiasco and public relations disaster.

Non-Arab Muslim nations, insisting that their commitment was to protect the holy cities of Mecca and Medina and to counter political violence, were equally hesitant of being sucked into the kingdom’s military confrontation with Iran.
Monday’s rupture in Arab diplomatic relations with Qatar and military alliance suspension raises the stakes for many non-Arab Muslim nations. It threatens to jeopardise their relations with Qatar, a major gas supplier and economic and commercial partner, and force them to choose between Saudi Arabia and Iran.
RELATED ARTICLES 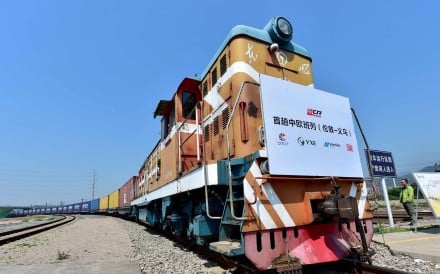 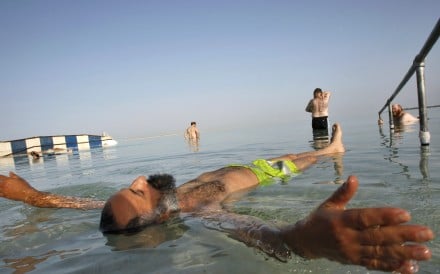 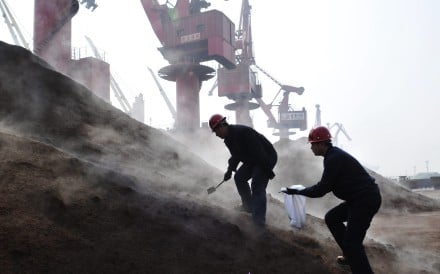 Belt and road ‘a chance like no other’ for businesses, top mining firm says 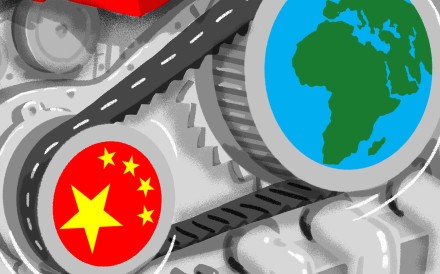 China’s belt and road strategy offers a winning growth formula, and the world must get on board