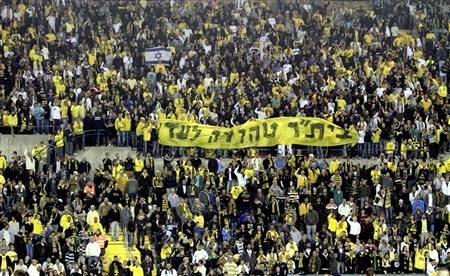 Israel’s Equal Employment Opportunities Commission (EEOC) has demanded that notoriously racist club Beitar Jerusalem, the bad boy of Israeli soccer, retract recent statements that it would maintain its policy of not hiring Palestinian players because of opposition by the team’s militant, racist fan base.

The demand comes as Israel is fighting an attempt by the Palestine Football Association (PFA) to get the Jewish state suspended from FIFA at next month’s congress of the world soccer body. The PFA charges that Israel hinders the development of Palestinian soccer by obstructing travel of Palestinian players between the West Bank and the Gaza Strip as well as abroad.

Senior Israeli soccer officials are in Europe this week for talks with FIFA president Sepp Blatter, and Michel Platini, the head of the European soccer body UEFA, in a bid to block the PFA effort. They counter the Palestinian assertion by insisting that the Israel Football Association (IFA) has no say in Israeli security policy.

The PFA effort is part of a broader campaign by President Mahmoud Abbas’ Palestine Authority to pressure and isolate Israel following the failure of peace talks and last year’s Gaza war by joining multiple UN organizations, particularly the International Criminal Court (ICC). FIFA was the first international group to recognize Palestine as far back as 1998.

An Israeli law firm joined the Israeli-Palestinian battle in international organizations with a petition to the ICC to investigate PFA president General Jibril Rajoub on suspicion of war crimes during last year’s Gaza war.

It is hard to assume that the demand by the EEOC is at least not in part related to the battle over Israel’s status in FIFA given that the commission has not acted in the past against Beitar Jerusalem, the only top flight Israeli club to have not hired Palestinian players even though Palestinians rank among the country’s top performers. Beitar’s nationalist ideology is embedded in its name, a reference to the Jews’ last standing fortress in the second century Bar Kochba revolt against the Romans.

Similarly, the Israel Football Association, even though it is the only Middle Eastern soccer body to have an anti-racism program, has repeatedly slapped Beitar Jerusalem on the knuckles but has always stopped short of significantly raising the cost of the club’s persistent racism. Beitar, which has long enjoyed the support of Israeli leaders, including Prime Minister Benyamin Netanyahu and other prominent right-wing personalities, has the worst disciplinary record in Israel’s Premier League.

Beitar’s rabidly anti-Palestinian, anti-Muslim La Familia support group sparked rare national outrage in 2013 when it unfurled a banner asserting that “Beitar will always remain pure” in protest against the club’s brief hiring of two Muslim players from Chechnya. It was the group’s use of language associated with German National Socialism that sparked the outrage against its consistent racism.

Nonetheless, La Familia operates in an environment in which racism, racial superiority, bigotry, double standards and little sincere effort to address a key issue that undermines Israel’ s projection of itself as a democratic state founded on the ashes of discrimination , prejudice and genocide is one predominant story that emerges from the country’s soccer pitches.

Writing in Soccer & Society, Israeli football scholar Amir Ben-Porat warned that “the football stadium has become an arena for protest: political, ethnic, nationalism, etc… ‘Death to the Arabs’ has thus become common chant in football stadiums… Many Israelis consider the Israeli Arabs (Palestinians) to be ‘Conditional Strangers,’ that is temporary citizens… Contrary to conventional expectations, these fans are not unsophisticated rowdies, but middle-class political-ideological right-wingers, whose rejection of Arab football players on their team is based on a definite conception of Israel as a Jewish (Zionist) state,” Mr. Ben-Porat wrote.

Responding to Mr. Levi, IFA president Ofer Eini said "Levy's words are not appropriate and their racist scent certainly doesn't contribute to Israeli soccer and Israeli society. As a coach and an educator it would have been better had he avoided comments which can serve those who want to divide Israeli society." Mr. Eini did not include any potential punitive action against Beitar in his statement.

The EEOC and the IFA took issue with a statement in a radio interview by Beitar coach Guy Levi that “it doesn’t matter that this is the right time; it would create tension and cause much greater damage. I won’t find any player from the Arab sector who would want to. Even if there was a player who suited me professionally, I wouldn’t bring him, because it would create unnecessary tension.”

Mr. Levi said that opposition by La Familia, whom he praised, meant that he would not sign Israel international Bibras Natcho, a Circassian Muslim, as it would stir unrest among the club’s supporters.

"My job is to coach the team, not to educate anyone," Mr. Levy said. Mr. Natcho, a CSKA Moscow midfielder asked Mr. Levy on Twitter: "What would happen if a European coach would have announced that he doesn't want a Jewish player on his team?"

EEOC commissioner Tziona Koenig-Yair asserted that Mr. Levi’s comments constituted “suspicion of racism in contravention of the law prohibiting discrimination based on nationality, among other things in acceptance to employment.”

Mr. Levi’s assertion that Palestinian players would not want to play for Beitar, presumably because the explicit racist provocation of, chants against, and attacks on Palestinians and Muslims by La Familia, was belied by Mohammed Ghadir, a Palestinian striker, who in 2011 said he wanted to play for Beitar but was rejected. "I am well suited to Beitar, and that team would fit me like a glove. I have no qualms about moving to play for them,” Mr. Ghadir said at the time. The EEOC and the IFA failed to step in.

In a commentary on Mr. Ghadir’s case, Ha’aretz columnist Yoav Borowitz noted that “an extraordinarily courageous Arab player has stood up, and fearlessly indicated that he is not afraid to play for Beitar. The Jerusalem squad did not assent to his request - not because he lacks sufficient talent, but because he is an Arab. This is a mark of Cain for Beitar Jerusalem and its fans, and also for the city of Jerusalem, the state of Israel and its legal system, the IFA and also for the media, which continues to cover this soccer team. Day by day, we reinforce and popularize this loathsome form of racism.”

Beitar was founded in 1936 by members of the Beitar movement established in 1923 in Latvia as part of the revanchist Zionist trend. Beitar’s founder, former Ukrainian war reporter Ze'ev Jabotinsky, hoped to imbue its members with a military spirit.

The club initially drew many of its players and fans from Irgun, an extreme nationalist, para-military Jewish underground that waged a violent campaign against the pre-state British mandate authorities. As a result, many of them were exiled to Eritrea in the 1940s. Many of La Familia’s members are supporters of Kach, the outlawed violent and racist party that was headed by assassinated Rabbi Meir Kahane. La Familia frequently displays Kach’s symbols.

Beitar’s initial anthem reflected the club’s politics, glorifying a “guerrilla army racist and tough, an army that calls itself the supporters of Beitar.” That spirit still comes to life when fans of Beitar meets their team’s Palestinian rivals. Their support reaches a feverish pitch as they chant racist, anti-Arab songs and denounce the Prophet Mohammed.

Beitar’s matches often resemble a Middle Eastern battlefield. The club’s hard core fans -- Sephardi
males of Middle Eastern and North African origin who defined their support as subversive and against the country’s Ashkenazi establishment -- revel in their status as bad boys. Their dislike of Ashkenazi Jews of East European extraction, rooted in resentment against social and economic discrimination, rivals their disdain for Palestinians.

The failure to seriously confront La Familia has entrenched Palestinian perceptions of an Israeli society that is inherently racist. Israeli Palestinian Member of Parliament Ahmed Tibi has laid the blame for La Familia’s excess at the doorstep of Israeli political and sports leaders. “For years, no one really tried to stop them, not the police, not the club, not the attorney-general and not the Israeli Football Association," he said.

James M. Dorsey is a Senior Fellow at the S. Rajaratnam School of International Studies (RSIS), Nanyang Technological University in Singapore, co-­‐director of the University of Würzburg’s Institute for Fan Culture, a syndicated columnist, and the author of The Turbulent World of Middle East Soccer blog
Beitar Jerusalem FIFA Israel Palestine Palestinians Ultras